Many believe we can see the telltale signs of its existence all around us -- numerous people discouraged and out of work, an economy that never seems to recover, ever-changing demands in the workplace, and lots of unfilled technology jobs across different industry sectors. We continue to hear reports about a skilled labor shortage in our modern workforce, and all of the evidence seems to point toward a growing U.S. skills gap.

Yet others interpret the same data differently and maintain that these indices are circumstantial occurrences being driven by various political and economic factors. These unfortunate occurrences deserve our notice but are unrelated and do not reflect any change in the preparedness of our national workforce. They maintain our skilled labor workforce is just as prepared as ever and there is no need for alarm.

If you're anything like me, you are probably frustrated with all the banter about the existence of a skills gap in our country. The national debate on this topic is so cumbersome, with various industries using different reporting methods and pointing to assorted proofs of its existence, while those with opposing viewpoints present arguments that there is no such thing as a skills gap -- the whole conversation is confusing and lacks clarity. I have often wished for a method of national reporting that could quantifiably show the effect of the skills gap on our nation and settle the dispute over its existence once and for all.

Why is it important to measure the effects of the skills gap? Well, it seems to me that if we cannot even agree on the existence of a skills gap, we will never agree upon a solution to the skills gap. Rather than being perpetually engaged in an argument over its existence, we need to be engaged in a dialogue about how to combat it.

What if I told you the U.S. skills gap can now be measured and chronicled, much like how economists have been able to measure the effects of the economy on average citizens since the 1960s? The famous economic indicator known as the "Misery Index" was created by the Johnson administration by simply adding the monthly unemployment percentage to the monthly inflation percentage. And now, by employing a similar method, I believe we have a way to quantify the effects of the skills gap on the national workforce and to bring a consistent measurement to this otherwise subjective discussion.

CIO Magazine Publisher Emeritus Gary J. Beach has been studying the skills gap problem for a number of years and has authored numerous articles on the subject. In 2013, he published a book titled The U.S. Technology Skills Gap. I recently asked him why there is an overall lack of awareness about the skills gap in the United States. He responded that "we have no tangible way to gauge it. A term with the word 'gap' prominently displayed, needs some sort of measurement."

Challenged with this paradox, he set out to find a way to measure the gap and came up with an ingenious solution that he calls the Skills Gap Misery Index (SGMI).

To create his Index, Beach makes use of monthly data from the Bureau of Labor Statistics. He starts with the "job openings" number identified in the monthly Job Opening Labor Turnover (JOLT) report and adds the number of Americans included in the monthly U-6 Unemployment Rate.

The JOLT number reflects the millions of individual jobs available in the U.S. at the time of the report while the U-6 number shows the millions of Americans who are presently unemployed and underemployed, including those who have simply stopped looking for work.

When plotted, the combined JOLT and U-6 numbers reveal our nation's ability (or inability) to place unemployed workers into unfilled positions over time. Beach indexed his findings back to January 2003 to provide a full 10-year look at the SGMI between January 2004 and January 2014 (Table 1). 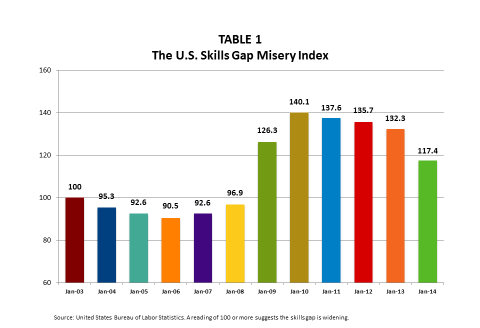 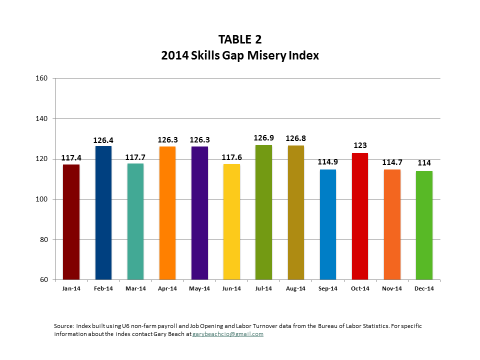 The Skills Gap Misery Index provides tangible evidence for the serious national dilemma that experts have been describing for a long time and gives researchers a whole new way to analyze the effects of the skilled labor shortage in this country. While there have been slight improvements since 2010, we can see that the U.S. skills gap is still a real problem for many Americans, and it now falls upon all of us to find solutions.