The black community is no stranger to the deep-seated issues of colorism, so the results of a new study highlighting color bias are not surprising.

The study claims to provide evidence for the subconscious bias where educated black men are remembered as having lighter skin. The claim adds fervor to the implication that successful black people are thought of as exceptions to their race rather than examples of what people within that race are capable of.

"Black individuals who defy social stereotypes might not challenge social norms sufficiently but rather may be remembered as lighter, perpetuating status quo beliefs," the study explained.

In the experiments, students were subliminally shown one of two words -– "ignorant" or "educated" -- followed by a photo of a black man's face. They were then shown seven photos with the same face with varying skin tones ranging from light to dark. The original photo they were shown was also included in the selection. Three photos were darker to varying degrees and three photos were lighter to varying degrees. After being shown these photos, participants were asked to identify the original photo they were shown. 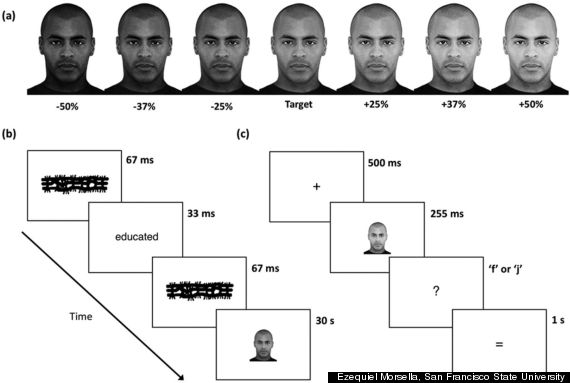 The results showed participants who were shown the word "educated" had more memory errors and often chose the photos with a lighter skin-tone when asked to recall the face they originally saw.

The authors of the study explain this by stating that the findings are: "consistent with the mind’s striving for cognitive consistency or the tendency to attempt to resolve an incompatible cognition in the direction of a stereotype."

They further to go on to explain the link to stereotyping and discrimination:

The authors also found that this bias isn't isolated to the black community "it is pervasive across and within diverse ethnic and racial groups, including Whites, Latinos, and Blacks."

To read the study, in full visit Sage Journal's site.