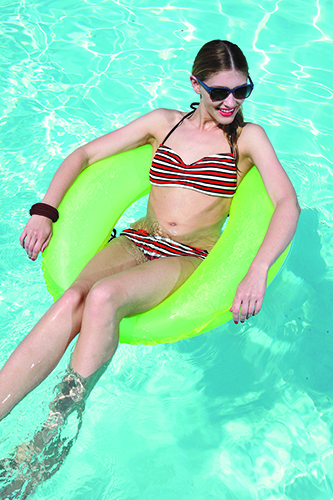 Quick: What's your personal risk of getting skin cancer? If you said low to average, you're not alone: 72 percent of women in a Glamour survey did too, even though 46 percent have used a tanning bed or had a history of sunburns -- factors that actually make a woman's odds of getting the disease much, much higher. "If you don't think you're at risk, you're not going to be as careful as you should be," says Elizabeth K. Hale, M.D., a clinical associate professor of dermatology at New York University School of Medicine. And here's the unsettling truth: Rates of melanoma have risen 800 percent over the past four decades, making it the most common cancer among women ages 25 to 29 today -- and rates of squamous cell and basal cell carcinomas (once considered "old lady" cancers) have shot up 700 and 100 percent, respectively, among women under 40. So what are our misconceptions about skin cancer, and how can we all do better, starting now?

1. You Think: No Family History? I'm Good!
Sixty-one percent of women said they're not worried about skin cancer because no one in their family has ever had it. The truth is that while genetics do affect your risk, your own personal history -- number of past sunburns, having 50 or more moles -- also matters. "Only 35 percent of your melanoma risk is tied to genetics," says Dr. Hale. "With nonmelanoma skin cancers, it's more like 10 percent."
What you should do: Remember: A funky spot is a funky spot, regardless of your genes. "When I noticed a weird-looking mole on my shin, I put off seeing a dermatologist for more than six months because I have no family history," says Brittany Arthur, 30, of Delaware, Ohio. "When I finally went in, I was shocked that I had stage III melanoma. I'm okay now, but it just goes to show that no one is immune." (And if your parents or siblings have had skin cancer, let your derm know so she can be especially watchful!)

2. You Don't Think You've Gotten That Much Sun
According to our survey, 43 percent of women suffered a sunburn in the past year -- and 72 percent have had more than five in their lifetime, a factor that doubles your risk of melanoma. And yet despite this, 47 percent of women surveyed say they "haven't had a lot of sun exposure." Worse still, 46 percent said they've used a tanning bed. Hey, we don't judge you for past transgressions (you were young!), but hear this: Just one indoor tanning session before age 35 ups your odds of melanoma by 75 percent. Just one. In fact, there are now more cancer cases from indoor tanning than there are lung cancer cases due to smoking, according to recent research.
What you should do: Ask yourself, Have you had more than five sunburns? Have you ever been to a tanning salon? Do you usually skip sunscreen? Do you have tan lines? "A yes to any of these means you're at an increased risk," says Melanie Palm, M.D., a San Diego dermatologist and spokeswoman for the Skin Cancer Foundation. Be extra diligent about using sunscreen every day, get yearly skin checks, and stay out of tanning beds. Each year in the U.S., nearly 420,000 new cases of skin cancer can be attributed to indoor tanning.

3. You Still Think a Tan Looks Healthy
More than half of the women we surveyed try -- on purpose -- to maintain a tan in the summer. Why? You think it makes you look healthier and prettier and feel more confident. "It's true that being outside is good for you: active lifestyle, vitamin D," says Deborah Cummins, M.D., director of dermatologic surgery at Boston University Medical Center. "But we exaggerate the benefits to justify getting sun."
What you should do: First of all, know there is nothing healthy about a tan. "It's your body producing pigment to protect your DNA," says Dr. Palm. And the damage is permanent. "I was diagnosed with melanoma at 18, and it changed my sun habits," says Chelsea Sutton, 26, of Oklahoma City. "I used to think, Oh, my legs would look so much thinner if I had some color. Now when I see someone with a tan, I don't see the beauty of it." For a safe bronze glow, use a self-tanner; we like Suave Professionals Visible Glow ($8.50, at drugstores).

4. You Think You Can Put on Sunscreen and Forget It
Eighty-one percent of you wear high-SPF sunscreen at the pool or beach -- and props for that. But you're either missing spots or not putting enough on to begin with, because 43 percent of you say that you got a sunburn in the past year.
What you should do: While naked, slather on at least a shot glass's worth of SPF 30 sunscreen -- or an even sheen of spray -- at least 20 minutes before you go outside so it has time to soak in. Reapply every two hours if you'll be outside, more often if you're swimming or sweating. Spending the majority of the day indoors? Cover any exposed areas with sunscreen. If you need incentive to step up your sunscreen game, consider this: More than 90 percent of skin aging is caused by the sun.

5. You Don't Think You Need a Skin Check -- Like, Ever
An astonishing 76 percent of you don't get annual skin exams. "I never got checked by a derm until I was 26," says Kit Wallace, 33, from Los Angeles, "and a stranger noticed a mole on my back and said, 'You should get that checked.' It turned out to be melanoma. That stranger saved my life. Now I have a skin exam at least twice a year. That's helped me catch nine more cancers early."
What you should do: Once a year, have a full-body skin check by a dermatologist. Make sure she checks your scalp, eyes, and mouth. "If the patient is comfortable with it, I also check the crack of their backside and genitals," says Bruce Robinson, M.D., a clinical instructor of dermatology at Lenox Hill Hospital in New York City. "Or I make sure their gyn does." If you're African American or Hispanic, your doctor should examine the bottoms of your feet, palms, and nail beds, three places skin cancers commonly crop up on dark-skinned women. "Unlike other types of cancer, with skin cancer there's such an opportunity for early detection," says Dr. Robinson. So make an appointment. Don't think you're too young, too dark-skinned, too anything to get skin cancer. You're not. Just go.

P.S. Here's the skin check that's saved the life of more than 80 readers.