We all know that the sun and your genes play a part when it comes to visible signs of aging. Well, according to a new study, where you live can also make your skin more prone to wrinkles.

RoC Skincare and Sperling's Best Places took a look at environmental and social conditions in more than 50 cities across the US. Their research reveals plenty of factors that may contribute to the early onset of wrinkles.

So what adds up to pre-mature wrinkles? It's a number of things really -- from not getting enough sleep to not eating a healthy diet, to certain things you can't control, such as the elevation of your city, its latitude, and pollution levels (smoggy air does a number on your skin).

Stress, which causes trouble in so many other ways, also ages you. The "Wrinkle Ranking" study took stress factors such as divorce rates, unemployment and commute times, into consideration.

So what city took the top spot? That dubious honor goes to Riverside, CA. All that California sunshine is really no help when it comes to wrinkles. High levels of stress and unemployment also helped Riverside take the title of Most Wrinkle-Prone City in the US.

It's probably no surprise that New York City came in second. The Big Apple, also known as the "city that never sleeps," had the third highest number of sleepless nights and the longest commute times. Rounding out the top five were Philadelphia, Atlanta and Baltimore.

Some cities found themselves in the top 10 due to high stress levels. Orlando might be the home of Mickey and Minnie, but it also has a divorce rate that's 12 percent higher than the national average. The city also has higher than average property crime levels and more violent crime.

If you live in one of the more wrinkle-prone cities, it's not likely that you will just pack your bags and head to San Diego (they ranked #50). Instead, you can take steps to reduce the impact stress and the environment has on your body. Always wear your sunscreen, even if you live in a cloudy place, remember to eat a diet that's full of healthy foods such as fruits, veggies and whole grains and take the time to exercise. If stress is aging you, take a few minutes every day to breathe deeply or meditate and try to get a full night's sleep each and every night.

Do you live in one of the top 20 cities? Check out the list below! 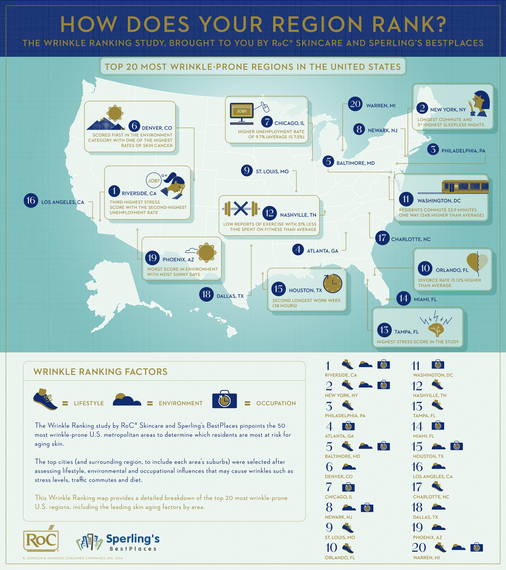