Created by tech start-up Pretty Smart Women, SkinneePix lets users edit photos so that they appear thinner in them. The $0.99 iPhone app tackles the age-old paranoia of the camera adding a few pounds, its makers say.

"SkinneePix makes your photos look good and helps you feel good. It’s not complicated. No one needs to know. It’s our little secret," the app's description reads. 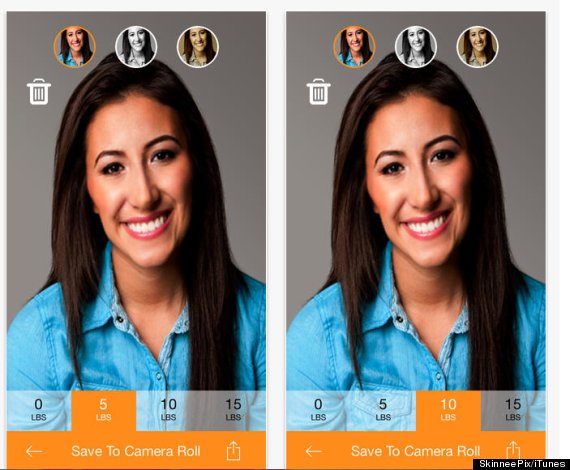 A preview of the iPhone app SkinneePix

Susan Green and Robin J. Phillips, the brains behind the app, say the idea for SkinneePix came about during a recent vacation with friends.

"All we heard people say was 'delete that, don't you dare tag me in that, this is horrible.' After the last vacation, we were like we can do something about this," Green told The Huffington Post. "You've always heard about the camera adding 15 pounds, we just wanted to level the playing field."

Though Green is touting the new app as a positive image boost, many are concerned the app reinforces skinny as the ideal.

"[A]ll [Skinneepix] is doing is further emphasizing the impossible standards of beauty we’re confronted with every day, which — let’s face it — isn’t going to help anyone do anything but feel awful about themselves," Bustle's Lucia Peters writes.

Meanwhile, Salon's Sarah Gray calls the app "the worst thing to happen to the selfie."

"In the same disgusting way that starlets and models are airbrushed, Photoshopped and altered when they grace magazine covers, this app takes the Instagram filter one step further and allows for self-slimming," she writes. "Rather than be body- and self-image positive, the app enforces the digital manipulation that many magazines are criticized for."

Despite criticism, Green says she believes the app is helping women.

"What I've found in this is that women who are 100 pounds and women who are 250 pounds, everyone has some issue with their body," Green told HuffPost. "Some people are like well, you're messing with someone's image and you're trying to tell people they should be skinny. No, that's the exact opposite of what we're doing."

She says the technology is also motivating people to shed a few pounds because they can see attainable weight loss goals.

"The first time I saw myself in that app, I felt better seeing my face a little slimmer. It's not this huge change. When I saw it I remember thinking, 'Gosh, I feel better about this picture,' and that's only 15 pounds. If I can lose 15 pounds and look like that, " Green told HuffPost. "We're hearing now people are using it to motivate themselves to get healthy, that's how I'm using that now, because I can see something that's attainable."

What do you think? Tell us in the comments below.