With their rainbow colors, Skittles are often adopted as an unofficial symbol of LGBTQ inclusion. But some say the popular candy’s formal Pride campaign leaves behind a sour taste.

In March, the Wrigley-owned brand unveiled an all-white version of the candy in an effort to allow “Pride’s rainbow to take center stage.” The revamped Skittles are currently being sold in black-and-white bags in both the United Kingdom and Germany, and will appear on store shelves through September.

“As a major advertiser we believe we have a responsibility to use our voice and the power of our brands to do good,” a Wrigley spokesperson told HuffPost in an email. “This campaign allows us to have great fun with our brand while also raising awareness of an important issue.”

Previously, the candy went colorless in June 2016 in conjunction with London Pride’s #OneRainbow campaign. This year, however, some are interpreting the gesture literally. By going all-white, they say, Skittles fail to reflect racial diversity within the queer community.

Also do white Skittles feel a little racist to anyone?

I dont think skittles thought through the LGBT pride campaign..

Releasing all white sweets during "pride"..

The jokes write themselves

WHY IS NO ONE TALKING ABOUT THE FACT SKITTLES HAVE CHANGED THEIR DESIGN FOR PRIDE MONTH AS ONLY 'ONE RAINBOW MATTERS' pic.twitter.com/ZCJVC4baw7

This is soooo fucking stupid.
Why should whiteness mean equality?!
Thats the fucking problem!
We will never have nor want whiteness!! pic.twitter.com/zatBSbSNDA

Others seemed a bit more open to the idea, and suggested the controversy was a bit overblown.

When you wanna be mad at something but there's nothing to be mad at & you haven't called someone racist in hours so you fight a skittles bag https://t.co/fq6ImyDPBw

Skittles tries to do a nice thing by making a bag of white Skittles for LGBT pride and gets called racist...really? Smh

Anyone complaining that the white #skittles for pride month is racist must think every piece of BLANK white paper is racist too. Dumb shits.

The criticism comes just days after Philadelphia added two new stripes ― black and brown ― to its rainbow flag to acknowledge queer people of color in its 2017 Pride festivities. The stripes, which were added as part of Philly’s More Color More Pride campaign, angered some who felt that drawing attention to race went against the original mission of rainbow flag creator Gilbert Baker, who died in March.

In an email to HuffPost, the Wrigley spokesperson shrugged off the controversy, and stressed that “diversity and inclusion are also key values for us.”

Pointing to the mostly “positive response” the campaign had received, the spokesperson added, “Happiness, fun and inclusion are at the heart of who we are ... Any suggestion that this support for Pride is in any way racist is clearly wrong.”

Find more ways to celebrate Pride by subscribing to the Queer Voices newsletter. 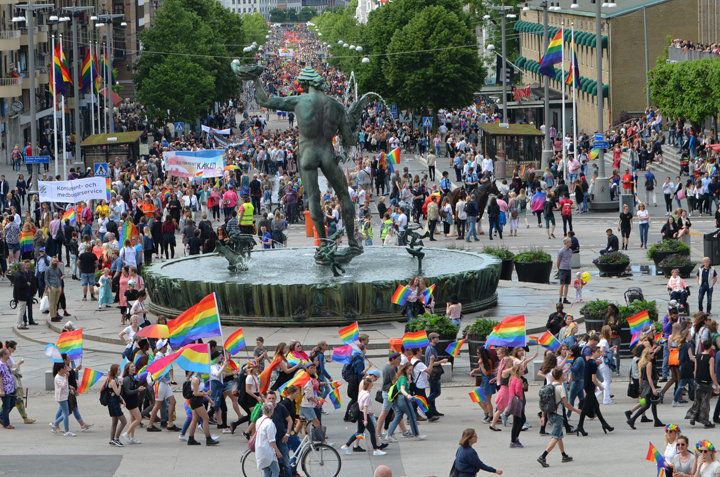