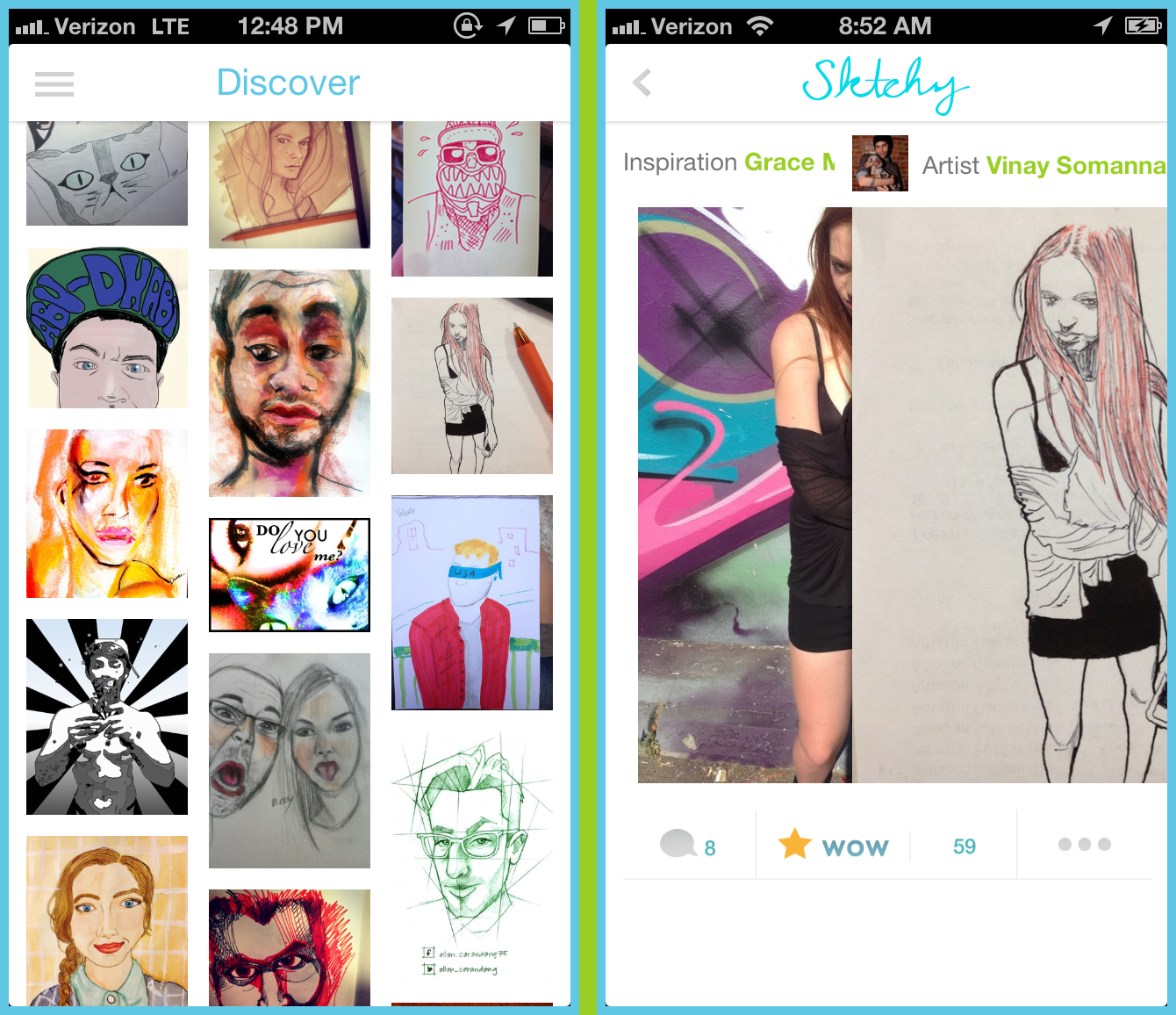 "There is a local context for this app," says Sktchy founder, Jordan Melnick, a 29-year-old Miami native and journalist by trade. Sktchy the app sprang from a local blog Melnick co-founded with a partner in September of 2010, called Beached Miami, covering the increasingly dynamic cultural scene here. Almost a year later, in June 2011, the online community met in the analog world with events in which people around Miami, including many local artists, came together to create portraits of each other in a fun, casual environment. Jordan and his team expected 50 to 60 people at that first event, but 500 showed up. Their second event, at the Bakehouse, an artists' collective and residency program in an old Wynwood bakery, attracted more than 1000 people. Jordan connected with Erin Una, a Yale-drama-educated costume designer, and other professionals, along with art lovers who were interested in learning how to sketch. These happenings continued for the next couple of years, until Jordan and his team realized the concept might have global appeal and started to discuss what Sktchy's ideal digital home would look like, finally concluding that an app would open up its reach beyond Miami, so anyone could take part. 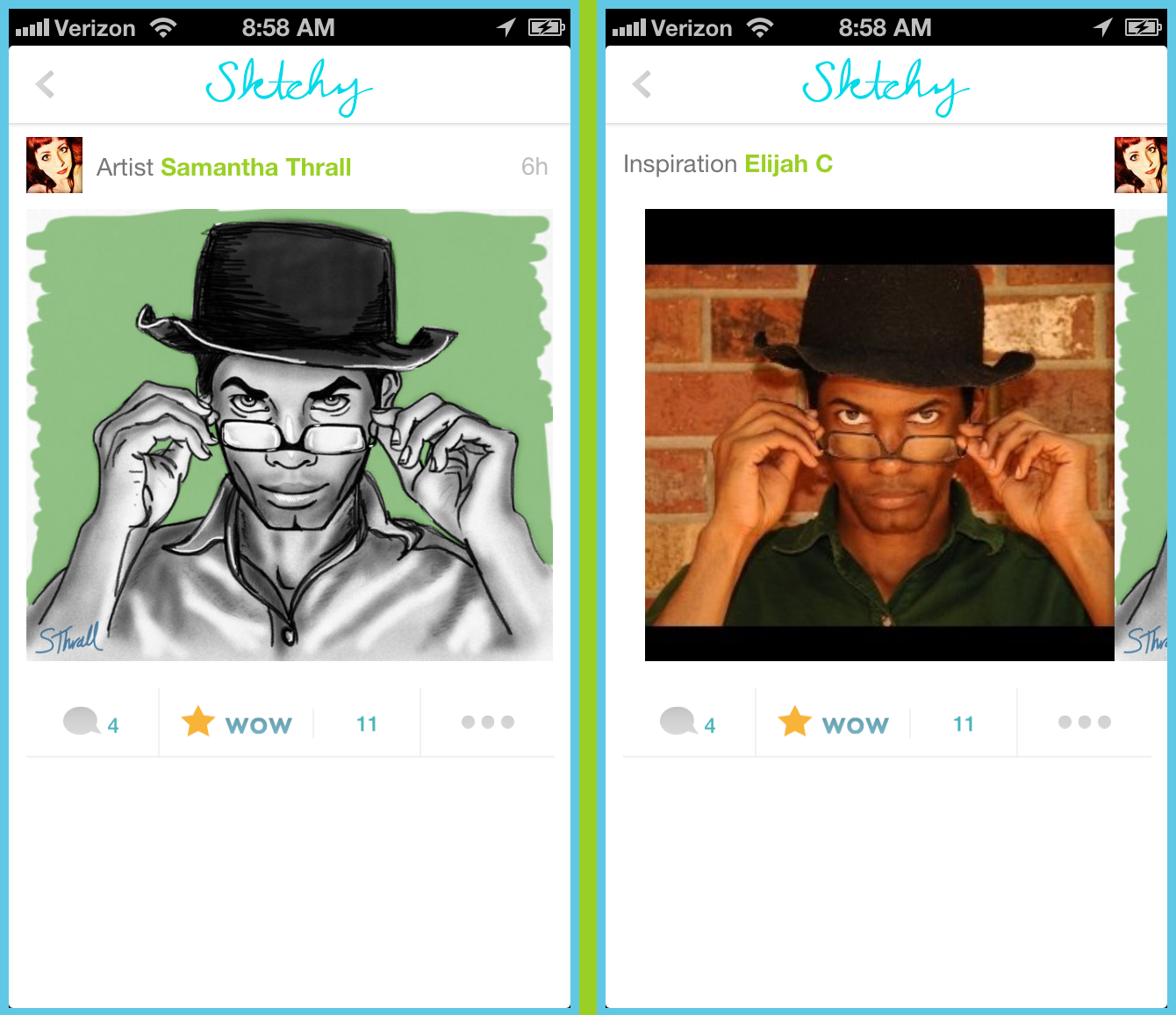 "Suddenly the context changed," Melnick continues, "From connecting two communities -- these people over here are artists, these people are the general public -- to now encouraging everyone to express their creativity." Melnick himself exemplifies the everyman learning to express his visual creativity, stepping out from behind his observer's stance as a journalist to participate as a sketch artist and growing in skill and confidence over time, as the evolution of his sketches reveals. "Drawing is a part of my life, where it wasn't before." People of all ages, races, nationalities and backgrounds upload pictures of themselves onto the app and then artists of all levels of accomplishment -- from complete newbies, including high school kids, to Ms. Una and another talented Sktchy mainstay, Allan Carandang -- sketch their own interpretations of whichever photos most inspire them.

The app organically began to serve as an entrepreneurial launch pad for some of its artists. Ms. Una, for example, expanded beyond costume design and began focusing more and more on the kind of colorful portraiture she was producing on Sktchy, ultimately launching a successful business as a digital sketch artist. "I would never have my new profession if it wasn't for Jordan and Sktchy," she exclaims, continuing:

My experience with Sktchy Miami gave me the confidence to start my own business sketching live portraits at corporate and private events. Through experimenting with Sktchy, I was able to find a style of colorful, quick sketching style that is totally new and unique in the world of 'typical' caricature artists for events. I owe everything to Jordan and Sktchy. I can only imagine now that Sktchy has expanded world-wide with the app, my business will continue to expand to other events outside South Florida as people become more aware of my work.

Other artists have been commissioned based on their work within the world of the app, which is a social network unto itself, a community of artists dialoguing through their sketched portraits, often of each other. Melnick is proud of the opportunities his app has afforded the professional artists who use it. However, he emphasizes that the spirit of the Sktchy app is "really open -- [so] anyone will feel comfortable to share their creativity."

When asked if people wouldn't prefer to look only at accomplished art, Melnick comes back quickly:

People don't agree on what that is. Even in the established art world, there is a really wide variety of tastes. People feel a certain standoffishness toward the establishment art world. We are part of a counter trend to make that a warmer space, to make art experiences more accessible. Galleries are [literally and figuratively] cold. We want to raise the temperature, so the average person can appreciate art. 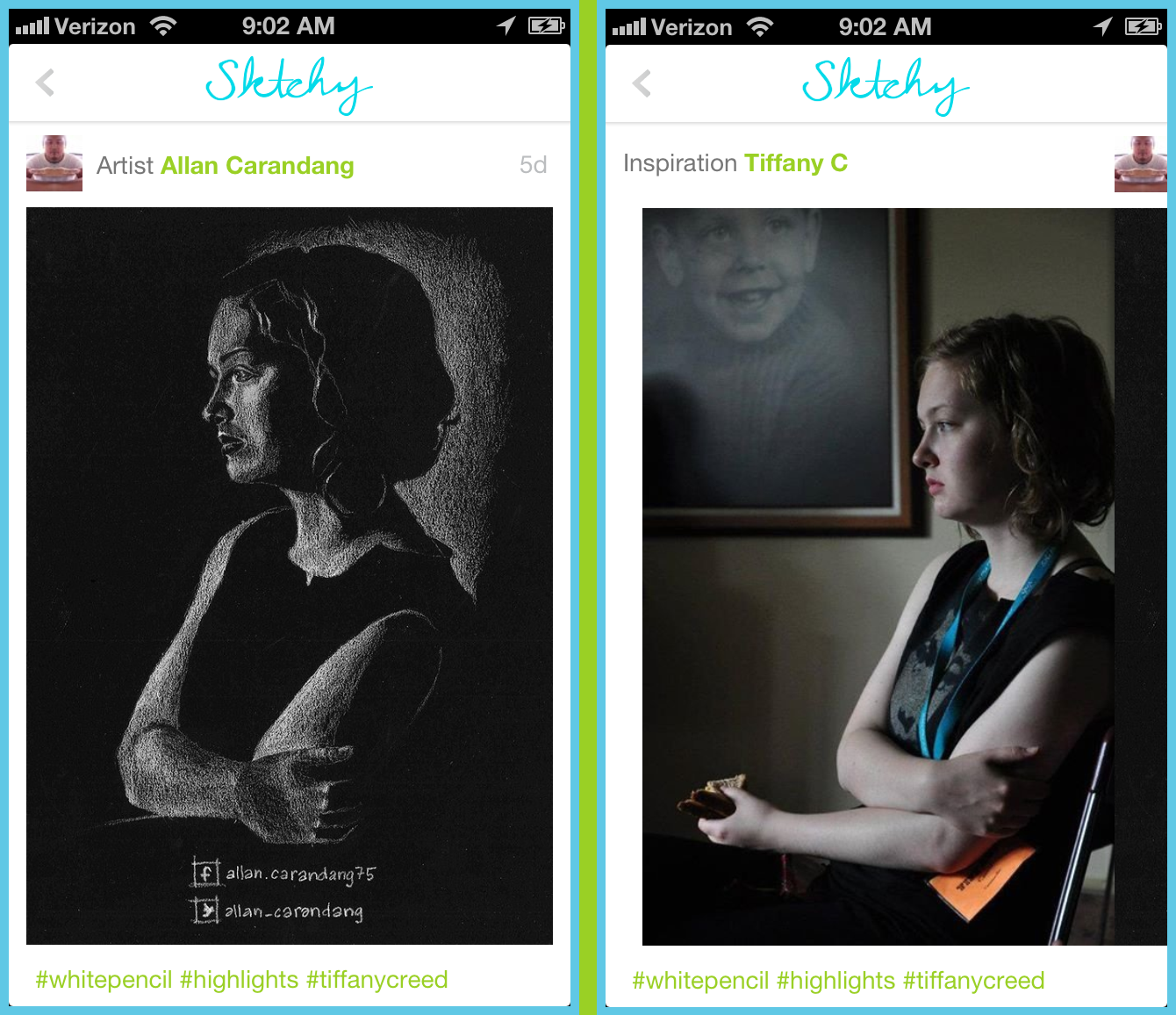 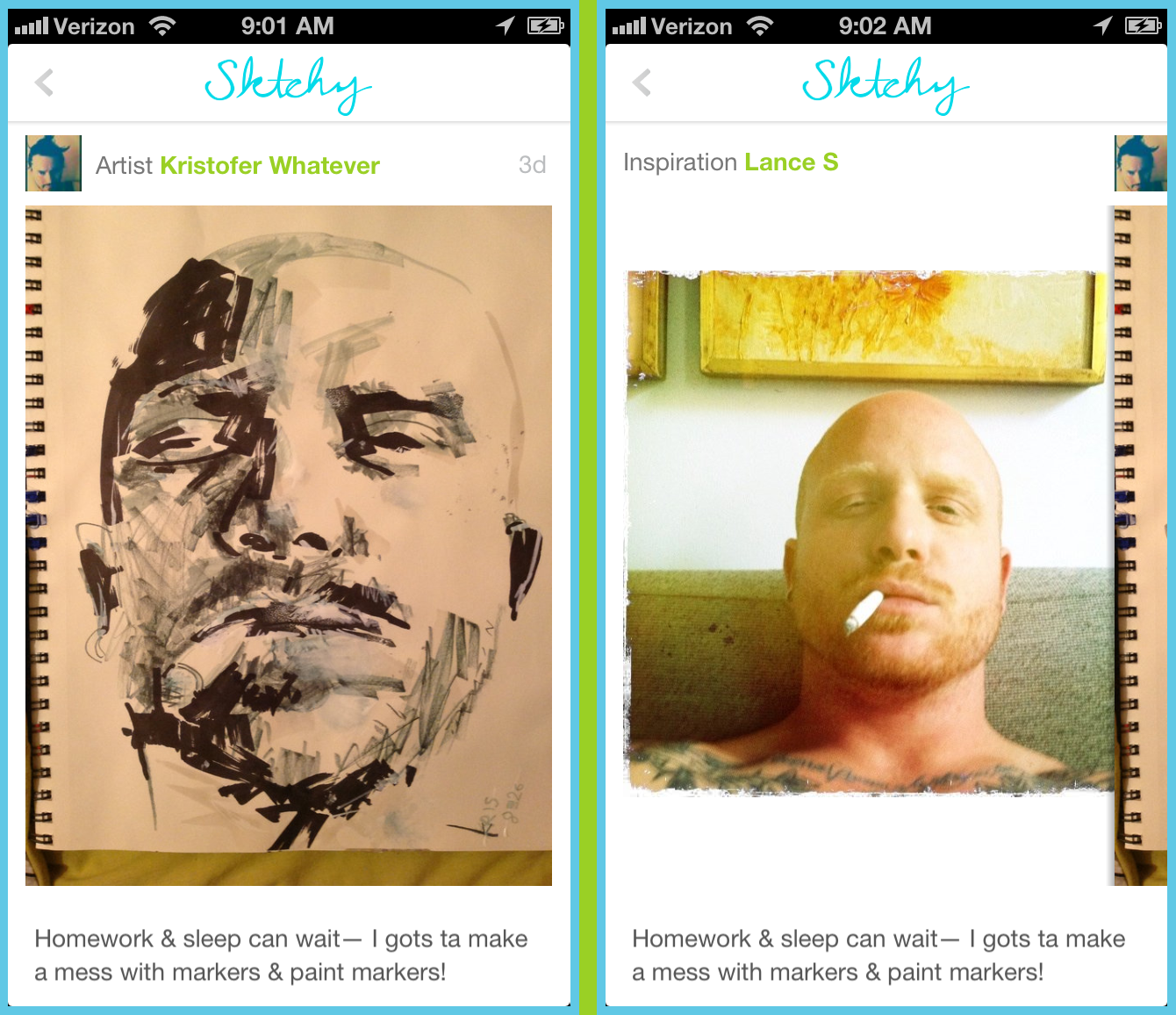 The "counter trend" to democratize, not just the viewing, but also the creation, of art includes works like those of French street artist JR, whose INSIDE OUT: The People's Art Project uses its website to enlist local communities worldwide to take photo portraits of a group of themselves with a specific theme or cause in mind and exhibit them on a massive scale in arrangements that make a strong statement and then JR, who is more or less anonymous in the vein of Banksy, uses his influence in the mainstream to draw attention to the cause via the art, as he did with the Lakota Sioux photos. There is also the global crowd-sourced Sketchbook Project, Wall People at Miami's Art Basel, and the killer traveling design competition Cut & Paste, made global by the inimitable John Fiorelli. The uniting principle of all of these art events seems to be that they view themselves as a playful community that transcends borders and external differences (often, but not always, employing technology ), a community of likeminded souls who want to create, share and view art in what Melnick calls, "a more approachable setting." 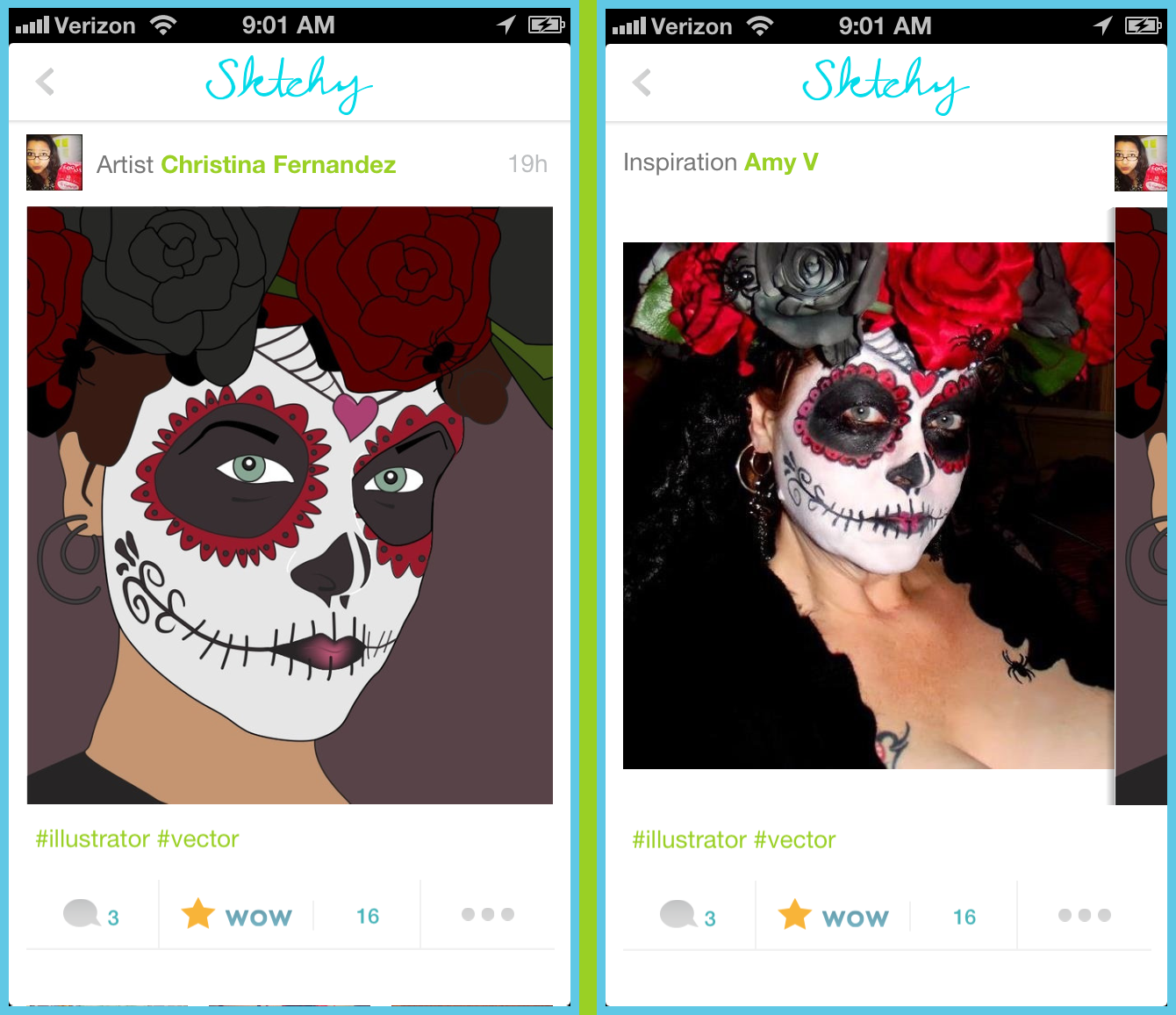 Mr. Melnick emphasizes that people use the sketches they post on Sktchy as a form of

communication -- not so different from text messaging, tweeting, sharing photos. But it takes longer. It's a fun and meaningful way to connect, taking time to concentrate on person's face, make work of art out of it, share it, make it a conversation piece.

Ironically, Sktchy employs the tools of the Insta Era to force people to take a little time to look at each other, not in a hastily-snapped Facebook or Instagram photo, but in a heightened way. "I would venture to guess," says Melnick, "that every one on Earth has at some point drawn some representation of a human face. There was a Guardian article in 2005, that reported on a 30,000-year-old cave painting that was a portrait, stylized like a mask. Before that, people only drew plants and animals, and each other performing daily tasks, rather realistically by comparison. The human face threw us for a loop. We set it aside as something different from everything else. The way the article put it, "The earliest human instinct was not to photograph the face, but to decorate it, to ennoble it.'"

Sktchy is currently available only on Apple devices, but Melnick anticipates a Droid release, as the community continues to grow.