The earliest, now-extinct human lineages, once thought to be multiple species, may actually have been one species, researchers now controversially suggest.

Modern humans, Homo sapiens, are the only living member of the human lineage, Homo, which is thought to have arisen in Africa about 2 million years ago at the beginning of the ice age, also referred to as the Pleistocene Epoch. Many extinct human species were thought to once roam the Earth, such as Homo habilis, suspected to be among the first stone-tool makers; the relatively larger-brained Homo rudolfensis; the relatively slender Homo ergaster; and Homo erectus, the first to regularly keep tools it made.

To learn more about the roots of the human family tree, scientists investigated a completely intact, approximately 1.8-million-year-old skull excavated from the medieval hilltop town of Dmanisi in the Republic of Georgia. Archaeological excavations there about 30 years ago unexpectedly revealed that Dmanisi is one of the oldest-known sites for ancient human species out of Africa and the most complete collection of Homo erectus skulls and jaws found so far. The world's largest, extinct cheetah species once lived in the area, and scientists cannot rule out whether it fed on these early humans. 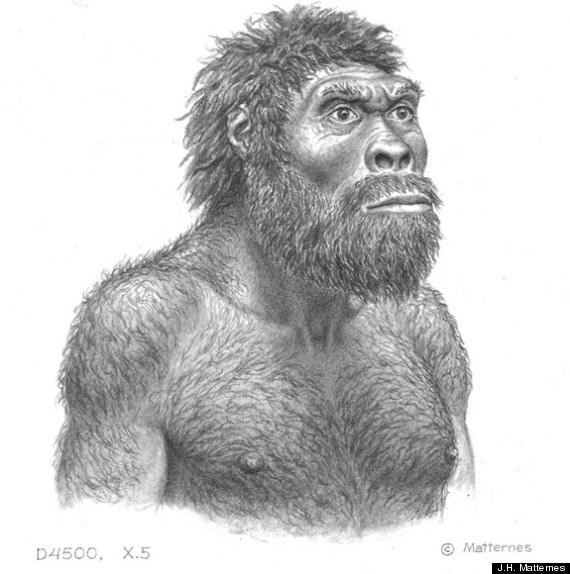 An artist's conception revealing what "Skull 5" may have looked like some 1.8 million years ago when he (the scientists suspect the remains come from a male) lived.

This fossil, the most massively built skull ever found at Dmanisi, is the best-preserved fossil of an early human species discovered yet. It probably belonged to a male, and its right cheekbone has signs that it healed from a fracture. [See Photos of the Dmanisi Skull & Excavation Site]

"We can only guess how the fracture was inflicted on the individual — it could be that it had an argument with another member of the group it lived in, or it could be that it fell down," study co-author Christoph Zollikofer, a neurobiologist at the Anthropological Institute and Museum in Zurich, Switzerland, told LiveScience.

This new skull, called Skull 5, was discovered alongside the remains of four other skulls of ancient humans, all of them associated with the same location and period of time, which back 1.8 million years ago was a relatively temperate mix of forest and steppe near a river. The fossil is unlike any other Homo remains on record — it combines a long face, massive jaw and large teeth with a small braincase, just about a third the size of that found in modern humans and no larger than those of much more primitive African fossils and even modern gorillas. Scientists hadn't observed such a combination of features in an early Homo fossil until now. [In Photos: Fossils Reveal Our Closest Human Ancestor]

"Had the braincase and the face of Skull 5 been found as separate fossils at different sites in Africa, they might have been attributed to different species," Zollikofer said in a statement.

The level of variation seen in Homo fossils is typically used to define separate species. However, the scientists found the level of diversity now seen between the five sets of fossils at Dmanisi — Skull 5 and the four other specimens — is no greater than any seen between five modern humans or five chimpanzees.

"If you take the biggest skull there and compare it to the smallest, the smallest one is 75 percent the size of the bigger one, and that's absolutely standard in what you would see in modern humans," Zollikofer said.

This discovery is supported by recent findings from these researchers showing that differences seen in Dmanisi jawbones that might seem to suggest they came from different species actually are mostly due to differences in how teeth get worn down.

The scientists also investigated the level of variation seen among ancient African Homo fossils. They found their level of diversity was similar to that seen in Dmanisi. As such, the researchers suggest that early, diverse Homo fossils may not represent several human species each specialized for their habitat, but rather variants of a single lineage that emerged from Africa capable of coping with a variety of habitats.

In other words, instead of Africa once being home to multiple human species such as Homo erectus, Homo habilis, Homo ergaster andHomo rudolfensis, "we think it is sensible to attribute all specimens to Homo erectus," Zollikofer told LiveScience.

The researchers caution they do not propose all fossil human specimens, including Neanderthals and modern humans, are lumped into Homo erectus. "We only refer to the time between 2 million and 1.8 million years ago," Zollikofer said. "We are not compulsive lumpers."

The researchers expect their interpretation of their findings to prove controversial among some other scientists. In rebuttal to any who suggest early Homo fossils all belong to multiple species and not one, Zollikofer asks "opponents to present us the magic-wand methods that they use to recognize species from single specimens."

Although paleoanthropologist Ian Tattersall, who did not participate in this research, told LiveScience from Laos in Southeast Asia that "this is a most amazing and important specimen," he added, "I believe it is a mistake to force it into Homo erectus in the interests of maintaining a linear picture of human evolution. It is actually very distinctive morphologically, and it dramatically underscores that human evolution involved vigorous diversification and experimentation with the hominid potential."

"I think they will be proved right that some of those early African fossils can reasonably join a variable Homo erectus species," paleoanthropologist Chris Stringer at the Natural History Museum in London, who did not take part in this study, told LiveScience. "But Africa is a huge continent with a deep record of the earliest stages of human evolution, and there certainly seems to have been species-level diversity there prior to 2 million years ago, so I still doubt that all of the 'early Homo' fossils can reasonably be lumped into an evolving Homo erectus lineage. We need similarly complete African fossils from 2 million to 2.5 million years ago to test that idea properly."

The scientists detailed their findings in the Oct. 18 issue of the journal Science.