Seven dazzling new species of miniature frogs have been discovered on what scientists call “sky islands” in Brazil.

The frogs, which belong to the genus Brachycephalus, are all so small they can fit on the surface of a dime, according to Science News. Twenty-one Brachycephalus were known prior to this study.

The most recently discovered of the tiny amphibians were found by scientists during a five-year study of the Brazilian Atlantic Rainforest and are described in a paper published last week by journal PeerJ. The paper notes that the bright colors on several of the species indicate powerful neurotoxins in their skin.

The Brachycephalus species are spread out amount the states of Paraná and Santa Catarina in southern Brazil, according to the paper, and are found on "sky islands” -- meaning mountains that are home to high-elevation, isolated habitats.

The paper notes that this isolation means some of the frog species are totally isolated from one another, unable to travel from one high-elevation habitat to the next. That means some species of the frog only exist on one, or a select few, mountaintops in the world.

The paper notes that the frogs’ habitat may be in danger from deforestation, which mostly occurs in the area as a result of pine tree plantations and cattle ranching. 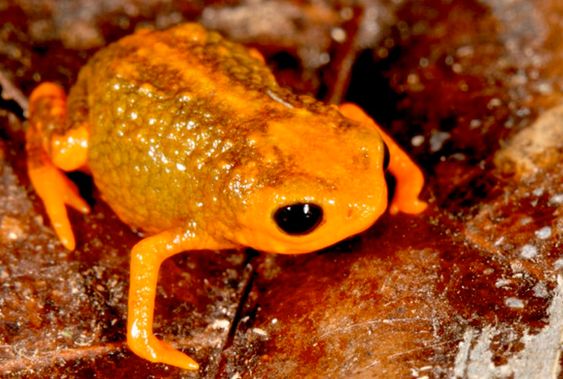 1 / 7
Brachycephalus boticario
This frog is named after the Fundação Grupo Boticário de Proteção à Natureza, which partially funded the study and is "a major contributor to conservation research in Brazil."
© 2015 Ribeiro et al.