The most expensive condo in the Miami area, referred to as "Sky Mansion," is located a few skips away from the $60 steaks of Prime 112.

Alex Birkenstock's triplex penthouse at Continuum towers in South Beach was sold on Friday for $25 million in a deal that broke records, according to a Platinum Properties release.

Birkenstock, a member of the German family that control the sandal company, bought the immense condo in 2009 for $9.9 million from Howard and Lily Steinberg, who purchased it in 2003 for $7 million.

Before Birkenstock bought it, the penthouse was listed at $25 million before dropping to $21 and then $14.5 million as the housing market tanked in 2007 and 2008.

"The ‘Sky Mansion’ is the ultimate Miami condominium with endless panoramic views and incomparable luxuries," Platinum Properties CEO Khashy Eyn, who represented Birkenstock in the sale said in a release. "It’s a one-of-a-kind, spectacular home – arguably one of the most magnificent residences in the country.”

What makes it so spectacular?

"Sky Mansion" sits on the top three floors of the exclusive Continuum and has its own private elevator.

The penthouse contains 5 bedrooms and 7.5 bathrooms, 7,400 square feet inside, and an additional 6,000 square in outside terrace space with to-die-for views of the ocean.

Floor-to-ceiling windows give 360-degree views of the Atlantic and Biscayne Bay and the property has 26-foot-high ceilings in the dining room. 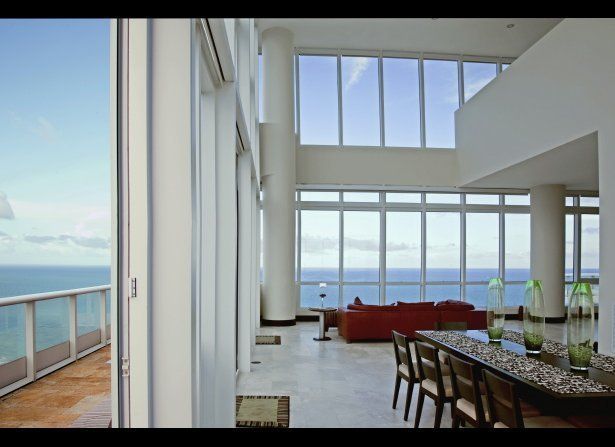