Amateur archaeologists have uncovered a massive network of tunnels under the Roman Emperor Hadrian's Villa in Tivoli, Italy.

The underground passageways likely allowed thousands of slaves and merchants to keep the estate running without creating any distraction at the street level.

Though similar tunnels have been discovered at the complex before, the new discovery is exciting because the passageways were not mentioned in any ancient plans of the grounds, Marina De Franceschini, an archaeologist heading the excavation who works with the University of Trento, wrote in an email. [See Photos of Hadrian's Villa and Secret Passageways]

Researchers have long known that a massive underground network of roads lay underneath the ruins of Hadrian's villa in Tivoli, Italy.

The villa was a retreat for the emperor Hadrian, a patron of art and architecture who reigned from A.D. 117 to A.D. 138.

But while Hadrian discussed affairs of state and held grand dinner parties in his opulent house, underneath him, a network of nearly invisible people kept the estate running.

The underground passageways allowed thousands of merchants, slaves and carts laden with goods to enter the villa without causing any hustle and bustle.

"It is a very modern solution, something similar to what you see today in cruise ships where you have luxury quarters for the passengers and a parallel system of corridors for the personnel," De Franceschini said.

Slaves chiseled the passageways out of the soft tufa rock, and the same rock was then was used to construct the villa. But over the centuries, soil had completely filled in the underground tunnels and their full extent was a mystery.

Using ancient architectural plans, researchers had uncovered passageways underneath southwestern part of the ruins, but they suspected there must be more.

So a few years ago, Franceschini asked for help excavating the eastern portion from a group called Sotterranei di Roma, or Underground Rome. These speleologists and amateur archaeologists specialize in rappelling into underground tunnels and excavating them, said Inge Weustig, a classicist who works with the group. 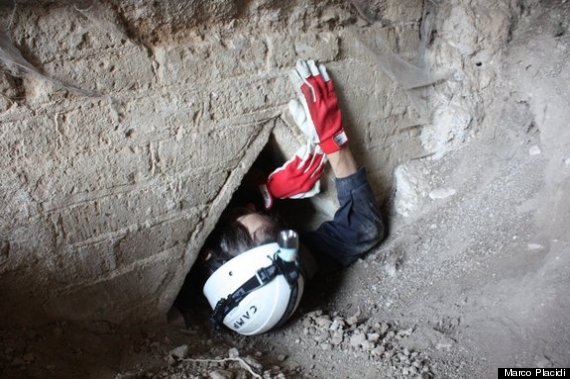 Someone from Underground Rome works their way through a narrow cavity into the underground tunnels of Hadrian's Villa.

After carrying countless buckets of dirt from the narrow subterranean passageways — some of which are just a few feet wide — the team uncovered an entirely new passageway, leading from an area of the Villa called the Academy to a 2.5 miles (4 km) underground roadway called the Grande Trapezio.

The specific purpose of the system of passageways remains a mystery, but it lies on the outskirts of Hadrian's Villa, Weustig said.

"It is seen as the more private part of the whole complex," Weustig told LiveScience. "They've interpreted it as a kind of secret or more remote place in the villa where he could just go to be alone, or at least with a few people."