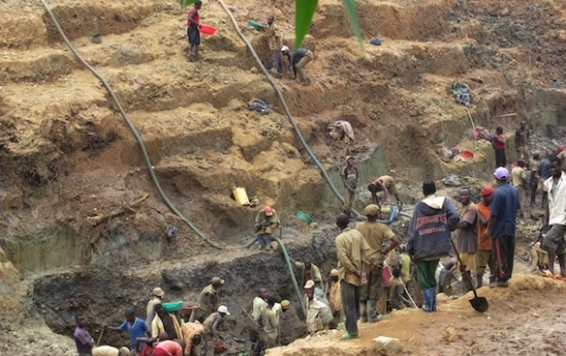 A mine in Eastern Congo. Photo credit: Janice Kamenir-Reznik.

A couple of years ago, I found myself in a gold mine in a remote town in Eastern Congo the week before Passover. It was a horrific sight to see. Young children dressed in rags stood on top of each other's shoulders, passing buckets up steep walls of dirt. They all lived under the control of a warlord -- who appeared to be straight out of central casting -- dressed in an Armani suit with heavy gold chains around his neck. There are thousands of mines just like this all over Congo.

The horrific scene made a special imprint on my heart and soul. As I stood in the mine, the fact did not escape me that the next week I would be sitting with my family in Los Angeles remembering the history of slavery that stands at the core of our Jewish story. As I left Congo and traveled home, I remember feeling a sense of both anguish and resolve. I felt anguish that slavery, genocide and the exploitation of women and children continue to tarnish our world in the 21st century; yet, I also felt resolve knowing that we could do something about the horrific scenes in the conflict mines of Congo.

Jewish World Watch got to work supporting legitimate mining efforts in Congo, with the understanding that all of our electronic devices are made with minerals emanating from the country. Since that trip, we have brought Republican and Democratic politicians together in the U.S. to pass a law requiring all end-user companies to trace and audit their mineral supply chains -- and successfully defended the measure in court. We have certified more than a hundred conflict-free smelters, and watched as several of the worst mines in Congo were demilitarized.

This year, we were overjoyed as Intel brought the first conflict-free product to market. The company has not cut-and-run from Congo to accomplish that goal; instead, it is using minerals from demilitarized or non-conflict zones inside the country. And by successfully tracing every mineral used in its production, Intel has shown the rest of the market that it is indeed possible to develop conflict-free products -- a fact that most of the business community denied and challenged unsuccessfully in court. Even more significantly, Intel has made its methods "open source," providing a blueprint for all other companies interested in following its lead.

The road to freedom is long for so many people in Congo and around the world, who remain exploited by warlords, militias and corrupt governments. Our collective voices can make a tremendous difference in their struggle. Together, we can save lives and change the world. As you make your plans to sit around the Seder table and remember our people's history of slavery, I hope that you will remind your family and friends about those still living in bondage and oppression today. Jewish World Watch has developed a number of items to help guide that discussion, including our special Passover discussion cards, Refilling the Cup of Justice. And once Passover is over, join us at JWW's annual Walk to End Genocide, and breathe life into the truth that each of us has the power to make a difference... one step at a time.

Originally appeared on March 26, 2014 in The Jewish World Watch Blog: One Life at a Time hosted by The Jewish Journal.