Last night, I saw my first riot grrrl concert when Sleater-Kinney took the stage in Pittsburgh for the first time in 19 years.

The show was sold-out. It was good. My ears hurt. I recognized about half the songs after marathon listening sessions in the prior weeks. I didn't care when I didn't recognize a song because the passion was contagious. I followed along on Twitter, Facebook and Instagram to find that a lot of my friends and peers were in the audience. 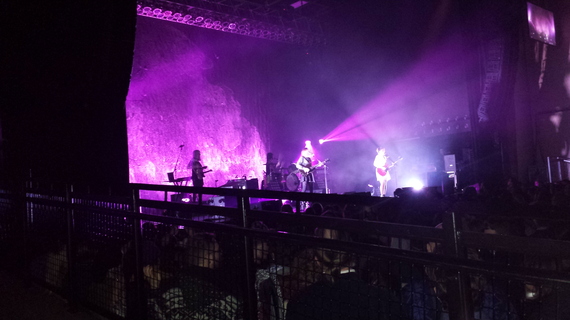 That got me thinking about feminism, specifically waves. As a solid Gen Xer (born in 1970), I've never found a home in either Second Wave Feminism or Third Wave Feminism. I've thus decided that I am a 2.5 Wave Feminist.

It means Second Wave Feminism shaped my life -- feminism was always a word and an identity, Ms. magazine was always published, television was filled with some tough ladies from Maude to Mary Richards to Claire Huxtable to Jessica Fletcher, most of whom were underestimated. A lot of moms in my neighborhood worked, some by choice and some by necessity, but it was always part of my life that women were in the workforce. My mom voted and so did both grandmothers. Both of my grandmothers were born before suffrage and remembered what it meant for their own mothers. In high school, one grandmother explained that she was a Republican but was also pro-choice and then lectured me about birth control. It was only decades later that I learned she had her first child while still in high school and was forced to give her up for adoption in the middle of the Great Depression.

I was in college (1988-1992) before I started to really question things like social justice and social equality. I still remember the day I realized that the families in my neighborhood had not objected to a school merger (in 1984) because of bussing -- it was because of the black kids. I had no clue. No one said anything out loud, no one offered me a context to examine my own life or my world. We were all focused on surviving. Feminism never touched that. Feminism meant I would go to college, that I would use birth control to avoid unwanted pregnancy and that I would see women in the workplace. Feminism meant that I was aware that girls were treated differently than boys. But it never went further than that for me.

It means that Third Wave Feminism was a little too late for me. I was in graduate school, reading "This Bridge Called My Back" and questioning everything while I lived in Louisiana and then Kentucky. My feminist identity was forged amidst academics and radical nuns as well as in the midst of utter poverty in rural communities. I had no access to riot grrrl music, but lots of access to bluegrass and Loretta Lynn and Dolly. Then I was back in Pittsburgh in the late 1990s again in graduate school, listening to The Indigo Girls and Ani as I explored my queer identity. Social justice again seemed removed -- no one in social work ever talked about feminism, either. I did attend a Take Back the Night rally, but then was too busy working in a domestic violence shelter and going to school to be involved in activities of any type.

Feminism was always about books and magazines like Bitch and Ms. for me. Then blogs and Twitter. It has never really involved a lot of face-to-face engagement except at the occasional fundraiser or conference. Survival has usually been the reason, often tied to affordability. For a few years, I heard about a monthly feminist potluck here in Pittsburgh, but I never found the location.

I have little tactile connection to Third Wave Feminism with the exception of having younger women spit "check your privilege" in my face which isn't very pleasant. I have never read a zine, never attended a concert, etc. I've never attended a feminist conference (so expensive!). I had no idea what ACT UP was doing or who the Lesbian Avengers were. I had no idea until much, much later. I was asking similar questions, but more on my own.

What I have experienced is working alongside some amazing women and girls over the decades, doing the hard work of community building and rebuilding. I've been very fortunate to experience the fusion of these two waves of feminism in a very unique and powerful way here in Pittsburgh. One of the best illustration of that is the annual Pittsburgh Dyke Trans March held each June. Anther is the work around #blacklivesmatter. A third is the nameless, often faceless work done to ensure survival and beyond by legions of women on the frontline in the human services industry striving to balance "outcomes" with human lives and realities whilst underpaid.

One reason I often feel isolated is because I'm in the middle of these waves, being pulled in two directions and struggling to breathe. Pittsburgh's stubborn unwillingness to wrestle with white privilege seeps into women's movements as well. I most recently found myself in this situation during the "Pittsburgh Saves Xmas" initiative -- five white ladies cooordinating a project to save Xmas. It was a success in terms of fixing an immediate problem, but there's no systemic impact or outcome. We are all well-intentioned, but we can't figure out how to make it happen -- we talk about coffee meetings, book clubs, etc. -- but life tears at those commitments and they fall apart. We are doing things, but we aren't often engaging in the dialectical work.

Sleater-Kinney didn't redefine my world. I enjoyed the music, enjoyed the crowd and enjoyed the social media. It was something to tick off my list. Then I'll go back to listening to the music on my own. Those ties that keep Corin, Janet and Carrie bonded over multiple decades and huge career trajectories aren't part of my actual experience of feminism. It doesn't feel like there's engagement from the wave above me (second) or the wave beneath me (third.) I continue to mostly experience it with the arts -- with movies like 'We Are The Best' or books about suffragettes or especially music. And don't forget the magazines -- especially Bitch and Ms. It does feel like waves washing over me, but mostly I'm walking on the shore.

I didn't have this experience laid out in SPIN so forcefully by a queer feminist 10 years younger than me. And I think the age gap is one explanation. I think my fandom for Portlandia is another. I think my unwillingness to redefine the word "hard" as an expression of intensity and fandom rather than a measure of survival is yet another reason. I am not part of this movement except by occasional dabbling. I'm never going to be a second-waver and probably could never afford to be. I'm much more interested in how groups like New Voices Pittsburgh explore this intersecting space of feminism than I am with traditional groups that feel inaccessible to me. I love Planned Parenthood and donate, but I don't feel engaged. I love many other women's organizations, but again I feel like I slide in and out of their doors as the need arises -- there's no reason to maintain contact. There's no relationship beyond the cause.

There's this in-between space for those of us who grew up in-between waves. When I watched the following interview with Sleater-Kinney about how no one picked up their mantle, I was like "a ha." So they picked it up themselves and forged ahead. What else can we do?

And, of course, I watched an interview with Sleater-Kinney on PBS. Of course I did.

**One note: Something that does bring feminists together is when a local rock critic (say Scott Mervis)includes sentences like this in his review "With her tight black dresses, red lipstick and bobbed hair, Ms. Brownstein is very much the rock star." Or this

When she was walking around Downtown Sunday afternoon, looking to buy a suitcase, it's likely the only people who would have taken Corin Tucker for a rock star were those who knew her from Sleater-Kinney. She looks much too sweet and mom-like. But when she opens her mouth, look out.

Sigh. Fortunately, both Brownstein and and Tucker are all too used to this. The problem is that the readers of the Post-Gazette are as well, the ones who don't have millions of fans or television careers to sustain them in saying "Fuck off." Sigh. The wave rolls on.