His snoring, snuggling and shifting are keeping you up all night. Follow these strategies to get your rest without getting rid of him.

When it comes to quality shut-eye, research has shown that women are the sleepless sex. They tend to have a harder time falling asleep than men and are more easily startled or jostled awake. Despite this, more women than men claim they're loath to give up spending the night at their partner's side. Here are the most common co-sleeping issues women have, and how to solve them.

"It drives me crazy how he falls asleep as soon as his head hits the pillow."
"Men can fall asleep faster, almost anywhere, and have fewer complaints about the quality of their sleep," says John Dittami, an Austria-based sleep researcher and co-author of the recent book "Sleeping Better Together." One possible explanation has to do with sex hormones, which affect how long we sleep overall and the amount of time we spend in each stage. Women's levels of estrogen and progesterone tend to fluctuate, especially during menstruation, pregnancy and menopause. Dittami says it's important for each member of a couple to focus on his or her own go-to-sleep routines. If yours involves reading in bed, look for a gooseneck light with a focused, just-strong-enough beam, because even a small amount of diffuse light can disrupt your partner, according to Dittami. Leave the iPad and laptop, with their sleep-inhibiting blue glow, in the other room. Because sleeping men tend to be less sensitive to movement, Dittami says you don't need to worry about waking him when you climb into bed.

"His snuggling -- while sweet -- makes it hard for me to fall asleep."
While researching their book, Dittami and his co-authors found that for couples, spending time together in bed (talking, touching, snuggling) is an extremely important aspect of a relationship. But most of us try to combine this together time with sleeping time, and that's where things get tricky. "Sleeping is an individual thing. It's not a duet," Dittami says. He advises separating the two phases of the night and setting aside time for pillow talk or cuddling (or both at once) before you move to opposite sides of the mattress. "We have this Hollywood idea where the couple goes to bed at the exact same time, with the woman falling asleep snuggled under the arm of the male," Dittami says. Not only does this rarely happen in real life, but, he points out, few women would be comfortable with their neck cramping in their partner's armpit.

"He gets so warm that I feel like I'm sharing the bed with a space heater."
You aren't imagining things: Men have a higher core body temperature, which is due in part to their thyroid function and testosterone levels, says Dittami. As your own body temperature falls just before bedtime, you might enjoy cozying up next to a warm partner. But this can get uncomfortable later in the night, especially if he starts sweating. He may feel damp, and he'll be more likely to emit pheromones that can keep you up (this is not to say he stinks; we're just sensitive to certain odors when we sleep). Dittami says he's heard of female patients starting off in warm pajamas and then shedding layers as the night continues and their temperature changes. Another idea is to put a cool pillow barrier between the two of you to block some of his body heat.

"Him: one thin cotton sheet. Me: a multilayered down cocoon."
"Using one blanket for two people just isn't conductive to sleep," Dittami says. Not only will it make you hyperaware of your partner's tugs and kicks, but it will amplify the heat. Dittami says that in Europe it's common for couples to use separate covers in bed. In fact, this is what he's found to work for him and his wife. Each has their own layered tiramisu of blankets. "It works like a peace treaty," he says.

"His tossing and turning feels like a mini-earthquake."
Men and women move about the same amount in bed, but women are more sensitive to their partner's movements. Even if he doesn't flop into bed "like a sumo wrestler" (as one woman described her husband's nightly ritual), his sudden movements may wake you. "Sleep gates," as researchers call them, tend to come up every 90 minutes or so, and that's when we're more susceptible to being yanked awake. If your partner happens to do something noisy, startling or disruptive during this time, and especially if it lasts longer than a minute or two, you may find yourself staring at the ceiling (or at him) in frustration. As mentioned, separate blankets can help, but if his jostling is a big problem, you may want to consider a new mattress -- or two of them. Sleep researchers suggest that couples invest in approximately 71 inches of mattress (which allows sleepers to stay about an arm's length away from each other, says Dittami); American king sizes are 76 inches. Memory-foam mattresses are best for minimizing bounce, according to "Sleeping Better Together," and a split-king mattress (two long twin mattresses set side by side in the same foundation) will mean you'll barely notice each other -- but can also make it challenging when you want to get close.

"He snores/clenches his jaw/gnashes his teeth."
While these unconscious habits may be infuriating to you, they're also taking their toll on the partner who wakes up with a sore jaw or molars with hairline cracks. Persuade your nocturnal teeth-clencher or gnasher to get a mouth guard, and remind him to wear it every night (both he and his dentist will thank you). A snoring spouse can be dealt with proactively or in the heat of the moment. Dittami says people tend to snore more when falling asleep, so if you're a sound sleeper, try to get to bed ahead of him. If he starts up during the night, you probably already know that you should nudge him off his back and onto his side. Dittami says the key is to do this immediately, at first wheeze, because the longer you wait, listen and stew, the harder it will be to fall back asleep. Most people change body position every 40 minutes or so during the night, so once he's in place, Dittami suggests propping a pillow against his back to keep him from rolling over.

"He sleeps -- or pretends to -- through wailing kids, mystery crashes and potential burglars, so I'm always the one who has to get up and investigate."
A British study ranking the sounds most likely to wake people found that a crying baby was number one for women but didn't even break into the top 10 for men (though car alarms, howling wind and buzzing flies did). Women were also more sensitive to dripping taps and commotions outside. It helps to hear he's not faking, but that still doesn't relieve you of nighttime surveillance duty. Dittami says this issue comes up all the time with couples, but the solution falls outside his area of expertise, so we called licensed marriage and family therapist Diane Gehart, PhD. She strongly advises that you wait until the next day, when you're both alert and rational, to explain the situation and ask for your partner's help in finding a solution. One suggestion: Explain that he'll probably have better luck than you calming a fretful child because therapists like Gehart say fathers tend to get less nighttime push-back than mothers. As for the unexplained noises, keep track of what's bothering you and come up with a plan that doesn't involve sending your husband downstairs five times a night to check for intruders. Noise machines block thumping air conditioners, alarm systems provide peace of mind and a dog can act as an extra set of ears, especially if it's kept close to you. "Pet trainers have told me that it's better to put a guard dog in your home than out in the yard, where it can be distracted or tricked," Gehart says.

How To Stop Sleep Problems From Ruining Your Relationship
Sleep Quotes 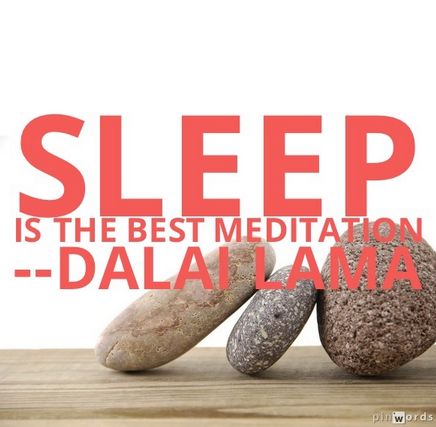