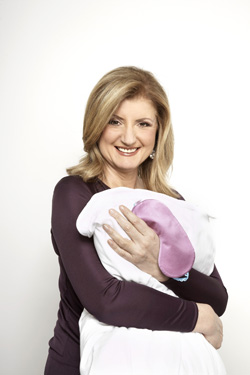 One of the great side benefits of writing regularly about a subject is that you suddenly become a magnet for other people interested in that topic. I've found that to be especially true when it comes to writing about sleep. I suppose that's because it's one of the rare things all people have in common: there is no one on the planet who doesn't sleep.

Over the first three weeks of our sleep challenge, I've heard from literally hundreds of people, writing (or stopping me on the street) to tell me about their experiences with sleep -- or the lack thereof.

I heard, for example, from an old and dear friend, Tony Schwartz, President and CEO of The Energy Project, whose new book, The Way We're Working Isn't Working: The Four Forgotten Needs that Energize Great Performance (coming out in May), has a whole chapter on the importance of sleep.

Tony, a business performance guru who has been described as "a National Treasure," and "the champion of a new source of renewable energy -- ourselves!", sent me a preview copy of his book. I haven't had time to read it all, but I read the Introduction and the sleep chapter and loved them. They convincingly make the case that, as Schwartz puts it, "the way we are working (and the way the world works) isn't working, for most people or most organizations." And he singles out the role sleep plays in making people happier, healthier, and more productive.

"No single behavior," writes Schwartz, "more fundamentally influences our effectiveness in waking life than sleep... sleep may well be more critical to our well being than diet, exercise and even heredity."

Sleep is so vital to success in everything we do, Schwartz titles his chapter about it "Sleep or Die." In it, he cites the role lack of sleep played in numerous high-profile disasters -- including the Three Mile Island meltdown, the Exxon Valdez oil spill, and the explosion of the Challenger space shuttle -- and points out that "Amnesty International lists prolonged sleep deprivation as a form of torture, and it has widely been used as an interrogation tactic."

He also highlights the fact that sleep isn't just a time for our bodies to rest -- it's also a time for learning. "Sleep is not simply cognitively restorative," he writes, "but also a time during which considerable learning occurs. Although the acquisition of knowledge occurs only during waking life, there is evidence that we process, consolidate and stabilize memory during sleep." So, if you still look at sleep only as "down time," you need to think again. Sleep is also practice time for a wide variety of mental skills -- and the full 90-minute sleep cycle allows for different kinds of learning. In our deepest sleep, according to Schwartz, "we appear to process and consolidate fact-based information, such as a new language or the capital of a state." REM sleep, meanwhile, "appears to play a key role in remembering how to do an activity, such as typing or driving a car." And visual learning is processed both in deep (slow-wave) and REM sleep.

Schwartz, whose clients include Google, Ford, Sony, and Gillette, as well as organizations such as the Los Angeles Police Department and the Cleveland Clinic, has spent his life coaching people how to perform at their best. And he puts getting enough sleep at the apex of the things we can do to achieve peak performance.

And he's written a terrific book that sums up why.

I've also heard from a number of sleep experts, including Dr. Richard Shane, a former-insomniac-turned-sleep-specialist based in Colorado, who has developed what he calls the Sleep Easily™ Method of getting a good night's sleep. Dr. Shane emailed to direct me to a pair of studies on the benefits of sleep he thought might be of interest to our Sleep Challenge audience.

The first was done at the University of Michigan. It found that getting just a little more sleep had a greater effect on a person's state of mind than a large increase in income. According to psychology professor Norbert Schwarz, one of the authors of the study, "Making $60,000 more in annual income has less of an effect on your daily happiness than getting one extra hour of sleep a night." So instead of putting in extra hours of overtime in the hope of impressing your boss and getting that raise you're sure will make you happier (different, of course, from the raise you need to make ends meet), save yourself the trouble, get to bed a little earlier instead, and reap the psychological rewards of a happier you. Odds are, a happier you will also mean a more creative and productive you -- so you'll probably end up getting that raise as well.

Dr. Shane also directed me to a study published in the professional journal Science that reaches many of the same conclusions about the connection between sleep and happiness -- and the lack of connection between extra money and happiness -- as the Michigan study. "Large increases of real income in the developed world over the past 50 years have yielded no change in reported life satisfaction," write the Science study's authors. On the other hand, "differences in reported sleep quality are associated with a very large difference in reported enjoyment during episodes at home."

So please keep emailing me -- and stopping me on the street -- to pass along this kind of fascinating information. These three weeks have been an amazing learning experience for me -- both while awake and asleep!