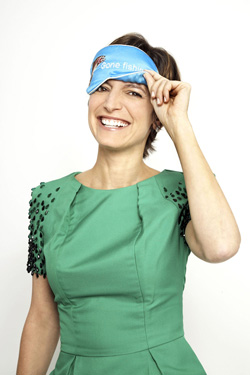 It's four days into Sleep Challenge 2010 -- the experiment Arianna Huffington and I kicked off to try to encourage American women to get more rest. So how's this American woman doing? Well, I've gotten seven-and-a-half hours every evening this week (which, embarrassing confession, actually feels like a major accomplishment), and I've learned a few things along the way that every drowsy female should know.

1. I realized that despite my sleep deprivation, I wasn't actually making myself go to bed. Duh. One of the reasons we launched this challenge was our conviction that women, more than men, are cheating themselves out of sleep. Lisa Belkin of the New York Times, covering our crusade, noted that that's not women's fault, it's society's, for making women's lives busier (work outside the home plus work inside the home equals a whole bunch of tired women). I agree with that, but it doesn't mean women are helpless here. I should know.

This week, for the first time since, oh, third grade, I actually forced myself to go to bed at a predetermined bedtime. (I counted backwards seven-and-a-half hours from the time I had to get up.) Now, I'm a responsible person. I'm not late for meetings with my boss; I show up for dinner dates when I say I will; I've never missed curtain time at a play. (Those of you who are just receiving my holiday cards this week can pipe down. No one's perfect.) But somehow, it never occurred to me until this experiment to consider bedtime an actual appointment to try to honor. I'd say, "Sure, I'll be in bed by 10 p.m.!" and then before I knew it, it'd be midnight, and I'd be in front of my computer, or wiping down the kitchen counter, or at the tail end of a "Real Housewives" marathon, blinking and thinking, "How did that happen?" Well, I let it happen. And this week, I didn't. Huh. That was easy.

Here's a tip for those of you who have the same problem I did with that "twilight zone" of time between 8 p.m. and 11 p.m.: Michael Breus, Ph.D. recommends setting an alarm clock for the time you need to go to sleep. You'll be forced to enter your bedroom to turn the damn thing off -- which at least gets you into the right room at the right time.

2. Your body isn't meant to digest stuff lying down. My usual nighttime routine includes a late dinner. But Dr. Breus was unequivocal: "I ask people to eat four or even five hours before they're going to go to sleep," he says. "The body was meant to digest sitting or standing -- not lying down." You just won't sleep as well, or feel as rested, if you're full. (He also recommends no coffee after 2:30 p.m., period. Even those people who believe they can drink an espresso after dinner and be just fine aren't getting the quality sleep they would without the java). I've been doing my best to follow his rules, chowing down as early as is humanly possible, and while I kinda can't stand it, I do feel better-rested. Speaking of which...

3. Getting more sleep makes you crave less junk. I've read all the research about the sleep/weight loss link; Glamour even published a major story last spring detailing, among other things, how you instinctively eat healthier food when you've gotten more sleep. And y'know, it's true. I found myself beelining to the chick pea soup in the cafeteria today voluntarily. Are any of you feeling this effect and eating healthier with more sleep?

Oh, and thanks to all of you who are commenting and doing the sleep challenge along with us. My, there are a lot of sleepy women out there! "I just broke my collar bone a month ago when I fell running with too little sleep," admitted commenter cmm. "I wanted to be thin but I wasn't even heavy ... Before then I was getting up at 6:30 a.m. ... but to please my friend I got up earlier ... Maybe my friend needs sleep too! Thanks for the encouragement for a healthy lifestyle!"

You're welcome, and take note, everyone: People-pleasing is not a worthwhile reason to cheat yourself out of sleep. As commenter Jess_I puts it, "It's so true that when you lose even a little sleep everything is just thrown RIGHT off. I owe it to myself to take care of myself by getting enough rest."

We all do! So let's do it together, and check back here next Monday to see how things are going. Good night!

More from the glamour.com Sleep Challenge 2010: