Tired. Beat. Worn out. A tough workout can, without a doubt, leave you ready to hit the hay. But according to a new poll, that workout doesn't just make you sleepy, it could make you sleep better.

People who identify as exercisers reported better sleep than those who consider themselves non-exercisers, according to a new National Sleep Foundation survey, even when both groups get the same amount of sleep.

Of the 1,000 people surveyed by the NSF, 48 percent said they got light physical activity regularly, 25 percent consider themselves moderately active and 18 percent said they get regular vigorous exercise, leaving 9 percent who reported no physical activity at all. Exercisers and non-exercisers alike reported an average of six hours and 51 minutes of sleep on a workday and 7 hours and 37 minutes of sleep on non-workdays. 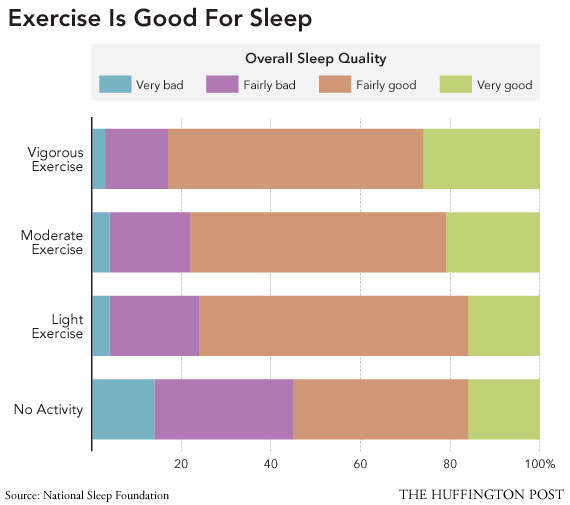 This is good news -- for all levels of exercisers, but especially couch potatoes. "If you are inactive, adding a 10 minute walk every day could improve your likelihood of a good night’s sleep,” Max Hirshkowitz, Ph.D., poll task force chair, said in a statement.

It's not how many minutes you're active or how vigorously you exercise, but really whether or not you get any activity at all that seems to predict how well you're likely to sleep, says Michael A. Grandner, Ph.D. an instructor of psychiatry and a member of the Behavioral Sleep Medicine program at the University of Pennsylvania. "Just moving a little bit might not be enough to drop pounds, but it can help improve your sleep, which itself has a lot of important, downstream positive effects," he says.

Indeed, greater overall health can improve your sleep, Buman explains. "Some of the more frequent causes of being sleepy are obesity, diabetes and smoking," he says, "and we know that regular exercise can help to improve each of these things." Exercisers who report better quality sleep may be enjoying the "positive effects that come from reducing our weight, improving diabetes and quitting smoking," he says. But exercise is also a known stress-reliever, and -- surprise, surprise -- we sleep better when we're more at peace.

Even physical activity you wouldn't typically consider "exercise" can lead to more serene slumber. In fact, simply sitting less can promote better sleep. Only 12 percent of people who say they spend 10 hours or more sitting each day reported very good sleep, while 22 percent of people who sit for fewer than six hours a day do, according to the poll. 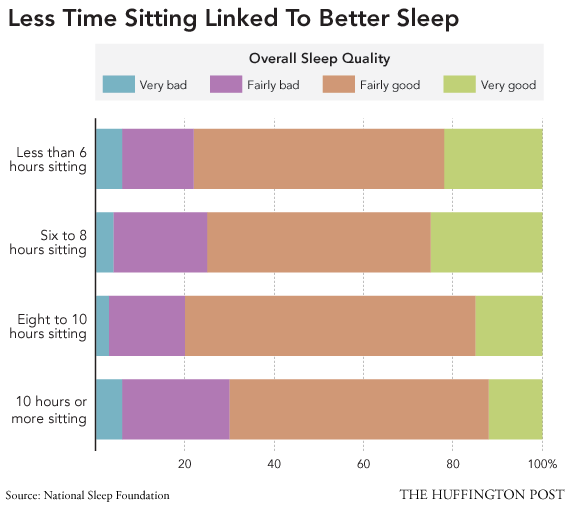 We know that too much daily sitting can lead to a number of health consequences, including heart disease and diabetes, independent of how much exercise a person gets, says Buman. This is the first survey to link all that desk jockeying to poor sleep. "Less sitting is always better, no matter how little you're doing. It doesn't need to be exercise, it can be something as simple as standing at your desk when you take your next phone call, or walking down the hall to talk to your coworker instead of sending that email," he says.

People who don't exercise at all also struggled the most to stay awake during daytime activities, like eating or driving. "The body needs to sleep just like it needs to consume and it needs to move," says Grandner, a spokesperson for the American Academy of Sleep Medicine. "Sleep, activity, diet -- they all support each other as three important pillars of health." 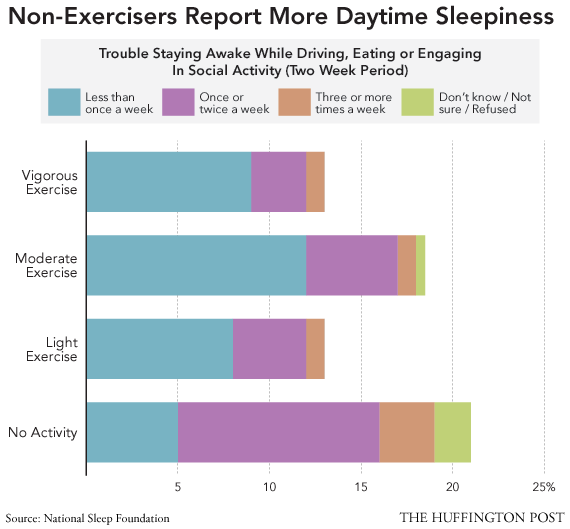 Luckily for everyone trying to fit exercise into a busy schedule, the poll also found that exercise benefits sleep no matter what time of day it is. Experts generally recommend leaving a few hours between a workout and bedtime, but Grandner says that doesn't necessarily need to be blanket advice for everyone. "If you can get your activity [at least] an hour or two before bed, that's probably ideal," he says. "But chances are you're probably not going to get the intensity or duration you'd need for it to impair your sleep."

Buman agrees, for the most part, though adds some people may still feel exercise too late in the evening disturbs their sleep, and they should consider working out earlier. People being treated for chronic insomnia are also typically told to avoid late exercise.

Perhaps unsurprisingly, more than half of the survey respondents -- at any activity level -- said that after a night spent tossing and turning or a night of shorter than usual sleep, exercise suffered. We've all been there: An unexpected late night leads to a few rounds with the snooze button rather than jumping out of bed to hit the gym. Luckily, one day of skipping your workout -- or one day of cutting back on sleep to make sure you fit it in -- probably won't make a huge difference, says Grandner, assuming you're already getting enough sleep.

22 Funny Tweets About The Songs Parents Make Up