Who would have thought that sleep would become the next crisis in our lives? The truth is, we don't get enough of it and we're starting to know that a lack of it leads to poor health. And now, technology is rushing in with a multitude of ways to measure it. The question is, will monitoring your sleep help inform and change your sleep patterns or just give you another reason to cry about sleep deprivation.

In New York, the city that never sleeps, sleep borders on obsession. We fret so much that WNYC, the New York Public Radio station, is conducting a citywide sleep project. The WNYC Sleep Project (pictured below) plans to help understand, and in many cases, mend our sleepless ways. 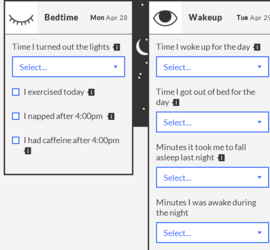 The project asks listeners to record their individual sleep diaries -- how long they slept, what they did before going to sleep, what was the quality of the sleep. WNYC takes your individual data and crunches it together with data from the rest of the city. The Sleep Project opens by noting that more than 25 percent of the people in the United States report not getting enough sleep, and about 10 percent of people have chronic insomnia. John Keefe, the WNYC's data journalist, notes that sleep is linked very strongly to our overall health. Sleep is involved in mood disorders, obesity, cardiovascular issues, and the possibility of being sick more often than usual.

The sleep disorder and treatment market represents a $6 billion market opportunity and it's increasingly going high tech. Jawbone, Fitbit, MyBasis (pictured below) -- all told, are seven of the top 12 fitness trackers that can record your sleep automatically. They use actigraphy, which uses sensors to monitor movement during sleep/rest. The problem is that actigraphy is a pretty gross measurement dependent on detecting the amount of restlessness you incur during your sleep. Fitbit and Jawbone monitor movement only. MyBasis (recently purchased by Intel) adds a heart rate monitor to the mix and is thought to be a bit more accurate because it's looking at two distinct measurements. 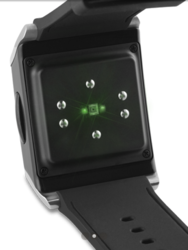 There are quite a few sleep apps available on Android and iOS devices. Some of these work by generating restful sounds (often charging money song by song). Some use accelerometers built into smart mobile phones to monitor sleep patterns. One popular technique is a built in alarm with a "wakeup window" that will wake you gently by tracking when you're in a lighter sleep. Other apps rely on meditation and breathing. Still, others let you keep self reported sleep diaries like the WNYC project. Many, like Drowzy, claim to be created using the medical community's input.

One of the most popular apps, Sleep Cycle, costs $1. The app asks you to place your phone under your pillow and then uses Bluetooth connectivity to monitor your sleep motion (basically your tossing and turning all night). The app collects your data and presents it to you in easy-to-understand graphs.

My own personal sleep exploration involves Sleep Genius ($4.99 for a monthly subscription), an app with an interesting pedigree. The guy who created the T-Mobile ringtone, a NASA scientist, and a neuroscientist who's worked with autism, teamed to create a special set of music tracks that retrain the brain to sleep and wake. It also uses a gentle alarm that wakes you up without activating your "fight/flight" reaction to the more traditional buzz of the alarm clock. 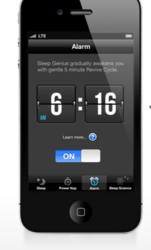 The Sleep Genius (pictured above) alarm clock is pretty great. Waking up gently without the startle of an alarm is a big step forward. However, going to sleep to the new age music the app uses doesn't do much to relax me. I've tried both with and without headphones. Also, I tend to worry about the technology -- everything from draining my battery by morning to hearing my emails and texts booping at me all night. My suggestion? If you're going to use an app in your bedroom put your phone on "airplane mode" or use the "do not disturb" feature. Use the screen lock button to save power and don't stare at your phone's lit screen -- that glow can contribute to restlessness.

Unfortunately, most research into sleep tracking tools is inconclusive. At best, these tools give you a crude idea of how you sleep. Maybe that will be enough to make you take notice and work on shut eye maximization.