Would you mind if your employees showed up drunk to work every day? It's such an absurd question it's almost laughable. Of course you would! However, that's exactly what we are getting if we don't help our employees get a good night's sleep every night.

In her new book "The Sleep Revolution," Arianna Huffington presents compelling evidence about how a poor night's sleep can have on performance. Motor skills are dulled and reaction time is slow. It's as if you are buzzed all the time.

Most company executives would say that they are not responsible for helping how much sleep an employee gets -- that's a personal issue. We at Next Jump feel the opposite. We, like most companies, train our people in how to do their jobs so that they will perform better at their jobs. We don't expect them to learn how to do their jobs on their own time. That makes sense. We take the same approach to helping our people be better at everything in their lives, better communicators, healthier eaters, physically fit and better sleepers, so that they will grow as human beings and be much more effective (and happier) and work.

We've experimented with all sorts of ways to help our people grow. Simon Sinek mentioned us in his TED Talk as the company that doesn't fire people (our goal was to remove the sense of fear and dread every quarter or every year when we look at our numbers. It's been an incredibly successful experiment, but that's another article). We were also featured in the new book, "An Everyone Culture," from Harvard Business Review because of our obsession with our people first culture.

In true Next Jump fashion, when we see an opportunity to help our people grow, we start experimenting. In this case, we saw that as our leadership development programs grew (and people gained more responsibility), people couldn't sleep - they simply couldn't shut their minds off. The dynamic was clear -- more senior, more responsibility... less sleep.

We tried nap rooms but found they didn't work. The availability of a welcoming bed didn't address the main problem of why staff members weren't able to sleep... they couldn't shut their minds off.

In the last six months we experimented to find a different solution and we have now rolled out a SLEEP CLASS across all of our offices: New York, Boston, San Francisco and London. We hold a daily 30-minute class from 2:30-3:00pm that has the impact of two hours of sleep.

We are sharing everything we've learned as we think it can help other companies.

A recent study on the Today Show talked about how less than 1% of people are "Elite Sleepers," people who can sleep for four hours and function like someone who has slept for eight. Unfortunately for the rest of us, we need seven-eight hours.

From a company perspective, we found that seven-eight hours of sleep is the realistic "safe zone." However, many enter the danger zone (too little sleep) of five-six hours on a routine basis. Is this the person you would want doing important work in your company? Even worse, is this the leader you would want making decisions that impact the lives of so many others?

Being a technology company, we are data-oriented. We built a fitness portal where every employee tracks their workouts. We average over three workouts per person per week and what started with practically nobody using the gym is now nearly a hundred percent. In the same portal, we asked a simple question: "How many hours of sleep did you get last night?". We found that the company average was 6.3 hours of sleep per night. We also found that employees over 30 years old slept nearly one hour less than the younger employees. Even more troubling, was that the leadership team had the most erratic sleep patterns.

We found that most people struggle to either fall asleep or stay asleep in the middle of the night. For all of the parents reading this, have you ever noticed how much easier it was to fall asleep and stay asleep before you had kids? You probably didn't notice how much easier you slept before you became a leader, responsible for the lives of others. We found there is a strong correlation between the crucibles of parenting and leadership. In both cases, you are now responsible for more than yourself. The lives of others depend on you causing your mind to race in the middle of the night thinking of your responsibilities.

Peter Chica, Next Jump's Head of Wellness explains: "As we explored the areas of human health, we found insomnia to be a problem, especially for our leadership team. I feel responsible that people can't sleep, but you can't just prescribe Advil PM or Melatonin. It's a different mindset than exercise and nutrition. Sleep is the most important in the triad of health. If you don't sleep, you can't exercise. If you don't sleep, you get a false sense of hunger, using extra calories to wake up. Companies invest in exercise and nutrition programs; it just makes sense to invest in sleep as well."

Safe zone of sleep: seven-eight hours. Danger zone: five -six hours. We needed to close the gap of two hours of sleep. That was the problem quantified.

Every office, always there (consistency);

You walk in, lie on a matt and are given only two rules: 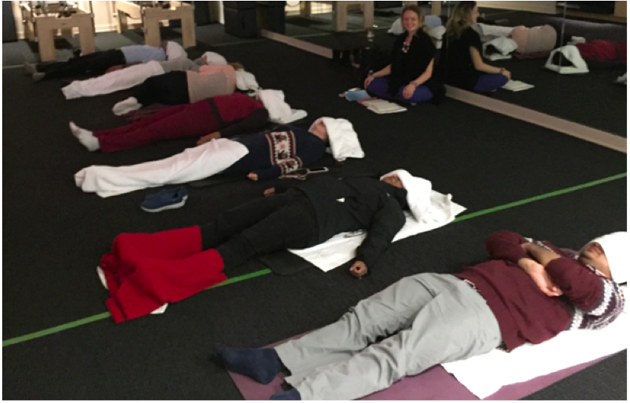 The class is called Yoga Nidra (yoga sleep), which is a combination of Yoga meets Meditation. An instructor, in a calming voice is using a distraction method to have you think of sunsets, sunrises, a red ball, green grass, and any thousands of images that are distracting. It's not that different from how you get a child having a tantrum to stop by asking them a question "what color was the ball? where did it come from?"

Every instructor claimed that one hour of Yoga Nidra = four hours of sleep. It is keeping you in a theta state of sleep, that dream-like state right before you fall asleep, for the entire period. As our NY office instructor Anne Koller describes, "Yoga Nidra is a form of guided meditation that sinks the brain into a state of consciousness called theta. The theta rhythm plays a large role in REM sleep, which is our most restful stage of sleeping."

I was skeptical. But the business and logical side of me thought if they are remotely right, this could have a profound impact in solving our sleep problem. We don't need to close a four-hour gap in sleep but we do need to close a two-hour gap. Thirty minutes was all we needed. Thirty minutes is not that much time, maybe we try and exchange the time it takes to get an afternoon caffeine boost with this class.

The feedback was overwhelming. Peter Chica shares, "We saw dramatic changes in people. Some who do it daily, some do it when they need it -- just a few times each week. Engineers reported coding for hours straight without breaks. (I'm not an engineer, but apparently writing line after line of code without stopping is a big deal)." People reported feeling more emotionally balanced, with these benefits extending to their families as well.

We faced other initial problems: people who said "I don't have a sleep problem" resisted. Secondly, it took some explaining for people to understand that not only is it appropriate to "sleep at work," but it was now encouraged. It wasn't lazy or inappropriate to take this class, it actually took discipline and is remarkably beneficial.

Peter Chica shares: "We measure program success by adoption. Sleep class was adopted immediately. The interesting thing is now it is going viral: everyone does it and even friends and family ask to come. The early adopters were the program's best salespeople. Now we help employees and their loved ones with sleep. Our goal in wellness is to help friends, family and the community. This ties back to our goal as a company: 'change the world by changing workplace culture.'"

On a personal level, I found that when I do toss and turn at night, it has helped to reduce my second stress of not being able to fall asleep by simply saying to myself "Thank god there is sleep class tomorrow. I just need to make it to 2:30." We're only beginning to understand the benefits of mindfulness that is also coming with a rested body and mind.

We host thousands of culture tours every year for individuals and organizations to learn about Next Jump's culture. One of the biggest requests we get from guests is to try our sleep program. People intuitively feel they need it and it will benefit them.

We have learned a lot when it comes to building a high performance culture: Health Ignites Performance. So is sleep a Company's problem worthy to address? According to the data, we get a resounding yes -- that it is a high return on investment.

Founder and CEO, Next Jump