Scientists have long known that sleep is vital to learning and memory, but now, we might have a better understanding of what exactly is going on in the brain as we slumber.

The idea that sleep aids in learning is not new. Past studies have shown not only that sleep seems to amp up our learning capacity, but that it's actually possible to learn as we sleep. This new study is unique in that it paints a picture of what activity is occurring in the brain as it learns a new motor task, such as playing a new song on the piano or learning how to type for the first time.

In the new study, published in the Journal of Neuroscience, researchers used three kinds of brain scans to actually see brainwave and brain activity changes associated with learning a new motor task. 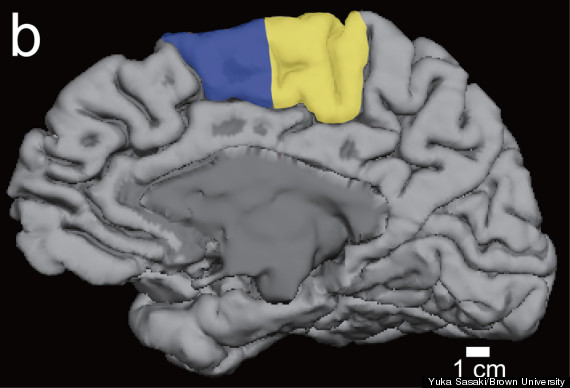 An MRI shows the location (in yellow) of the Supplementary Motor Area, an area of the brain found to be involved in consolidating learning of sequential finger tapping motor tasks. Image by Yuka Sasaki from Brown University.

The study is based on brain scans on 15 participants. For three nights, nine of the study participants slept normally (at their typical bedtimes) while undergoing magnetoencephalography brain scans. This particular type of brain scan measures brain oscillations as well as their sleep phases throughout the night.

On the fourth day, the study participants learned a motor task -- a finger-tapping task conducted by their non-dominant hand -- and then went to sleep for three hours. As they were sleeping, they were again subjected to the magnetoencephalography brain scan, as well as polysomnography. After being woken up, the participants were an hour later asked to do the finger-tapping task.

Not all the study participants were allowed to sleep after learning the task -- some of them performed it four hours after learning it sans sleep. However, researchers found that those who got the sleep performed the task better than those not permitted to sleep.

Then, on the fifth day, all of the study participants underwent scanning with an MRI machine. The purpose of this is so that researchers could see where the brain oscillations previously observed with the magnetoencephalography were occurring in the brain.

Researchers found that for the study participants permitted to sleep after learning the finger-tapping task, there were changes in two kinds of brainwave oscillations, called fast-sigma and delta. These changes occurred in the supplementary motor area during the "slow-wave" sleep phase.