Sleepiness could take a toll on pro baseball players' careers, according to a new study.

The findings are "a great reminder that sleepiness impairs performance," study researcher Dr. W. Christopher Winter, M.D., the medical director of the Martha Jefferson Hospital Sleep Medicine Center, said in a statement. "From a sports perspective, this is incredibly important. What this study shows is that we can use the science of sleep to predict sports performance."

The study included 80 baseball players in the MLB, who came from three teams, whose sleepiness data was collected before the 2010 season. Then, researchers followed up with these players three season later -- Dec. 16, 2012 -- and determined if they were "inactive" of they had been demoted, were no longer playing, or were no longer signed to a team.

Check out the chart from Winter's presentation below -- organized from the most well-rested scores at the top to the sleepiest on the bottom. The blue players represent those who remained active three years after the evaluation, while the white players had been inactive or demoted. 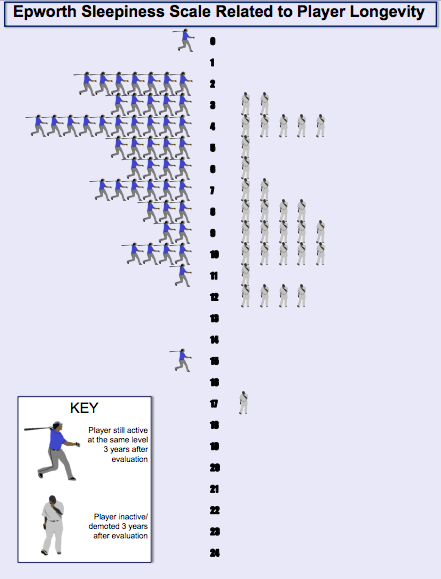 Winter told HuffPost at the meeting that sleep might just become the next big performance enhancement tool, as teams continue to search for a competitive edge. While many professional athletes have already optimized their nutrition and hydration routines, focusing on quality Zzs is a logical next step. "It's cheap, it's safe, it's legal," he said.

And while his findings focused on the career potential of baseball players, Winter says it can serve as a reminder of the importance of getting good, quality rest no matter what your profession. "If you're sleepy," he says, "it's hard to do your job."

For more on how sleep can help athletic performance, click here.