In Punchdrunk Theater's "Sleep No More," Shakespeare's “Macbeth” is transformed into a 1940s noir nightmare. Macbeth's castle at Inverness turns into the "McKittrick Hotel," which is made of two Chelsea warehouses that have been gutted and reknit together. The labyrinthean stage isn't constrained to one space, but moves across six floors in what feels more like a highbrow haunted house.

This is not a play you sit and watch. Spectators at "Sleep No More" are given white masks to cover their faces, instructed to keep silent, and then set loose into the maze for up to three hours. How long you stay, where you go, and what you see is entirely up to you.

"It's more filmic than theatrical," said Felix Barrett, Punchdrunk's artistic director. "I see the show as a film, a living film, and you're a camera moving within it."

But this is the kind of show Punchdrunk, a British theater company formed in 2000, is all about. The company has made its name on similarly large scale, immersive performances jumping off the texts of "The Tempest," "Woyzeck" and "Faust," to name a few. Their next project, tentatively called "Punchdrunk Travel," will literally send participants off from the airport on a vacation that has been totally planned out by the company.

Indeed, "Sleep No More" gives the audience far more responsibility than a traditional play does. Once inside, there's no one to tell you where to stand, or what to watch. You can open the drawers in a cabinet if it seems right, or you can linger in the graveyard, touching the stones. You can follow one actor or actress from beginning to end, or you can scamper around the entire space, happening upon scenes that may be midway through, or just finished by the time you drop in.

No matter what you do, you know you're missing something that's going on somewhere else. When you leave, you leave knowing there are rooms you probably didn't find.

"If you allow yourself to be gently caressed and manipulated by the show then you can see your own show," said Barrett.

The show, which opened on April 13 on West 27th Street, has since extended its run to the beginning of November because of consumer demand. Reviewers have been alternately baffled and dazzled by the unconventional show.

"What in Hecate’s name is Sleep No More? A dance-theater horror show? A wordless, nonlinear mash-up of Macbeth and the darker psychosexual corners of Hitchcock? A six-story Jazz Age haunted house for grown-ups and anyone who’s ever entertained sick cineast-y fantasies of living inside a Kubrick movie?" asked Scott Brown at New York Magazine, concluding, "I’ve felt theater overwhelm me before, but until last Tuesday, I’ve never felt it pass through me."

The New Yorker's Hilton Als added, "We can only watch as the performers reduce theatre to its rudiments: bodies moving in space. Stripped of what we usually expect of a theatrical performance, we’re drawn more and more to the panic the piece incites, and the anxiety that keeps us moving from floor to floor."

The most striking difference between "Sleep No More" and a staged play is the audience's relationship with the actors themselves, who are often close enough to touch. During one performance, an actor playing a nurse pulled an unsuspecting viewer into a room, shutting out the rest of the audience.

While some audience members seemed to give into the pack mentality, drifting around in settled groups, others moved solo, poking into corners alone.

"They're very empowered to feel free, to do things they would never dare to do without the mask or the darkness," said Sophia Bortolussi, one of the actresses playing Lady Macbeth (most of the roles are played by different actors depending on the night).

Shakespeare's iconic words are not spoken faithfully by the actors, but every line of the play can still be found in "Sleep No More,” written on scraps of paper and scrawled on walls. The title of the show comes from a line in the second act of "Macbeth," when Macbeth, wracked with guilt over the murder of Duncan, recounts a voice he hears calling, "Sleep no more! / Macbeth does murder sleep."

The play’s greatest debts to "Macbeth," however, are thematic. The world of "Sleep No More" is infused with dread, paranoia and superstition. Even in rooms empty of actors, it feels as if you're walking through the aftermath of some violent crime. A child's nursery -- sheets tucked, toys propped on the pillows -- has a mirrored wall through which you see the same room, bed ripped to shreds, furniture broken. The darkened halls of an insane asylum display stained straitjackets as a low, dissonant thrum plays from an unseen speaker.

Bortolussi recalls one performance, when an audience member offered her a towel after a scene that had her climbing out of a bathtub, naked and bloody. Watching actors thrash and scream from a few feet way, or chasing them as they run down hallways, creates a sense of responsibility impossible to feel from a balcony seat 40 feet up.

This works both ways, as the actors respond in kind to the spectators.

"There are moments where the audience will pan into a different place and suddenly I have to play the whole thing differently as a result," said Eric Jackson Bradley, who plays Macbeth. "It's almost like a conversation."

From October 26 to 31, a limited number of tickets will also be available for one-night-only concept performances following the regularly scheduled performances.

Check out pictures from "Sleep No More" below: 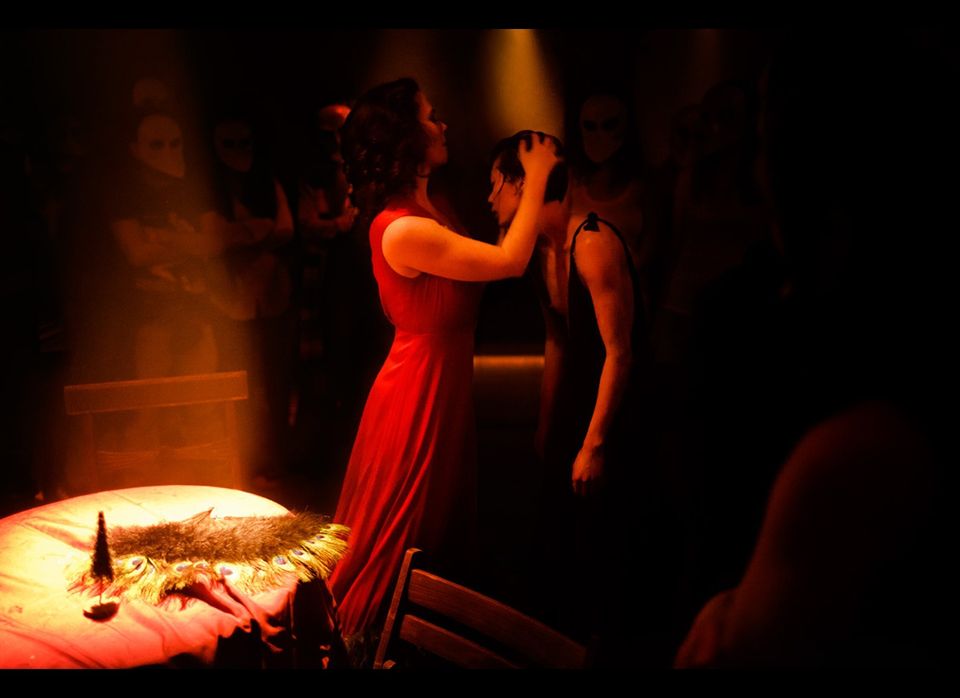