The Huffington Post and the Schreyer Honors College are excited to bring the #SleepRevolution to Penn State's University Park campus!

The Huffington Post's Sleep Revolution, sparked by Arianna Huffington's new book, includes a tour of 50 colleges and universities across the nation. On April 7th, from 5:30-7 p.m. in the Grandfather Clock Lounge of Atherton Hall, Penn State University will join these other colleges in promoting the mental health and physical wellbeing that come with sufficient sleep.

This campaign focuses on the sleep habits of university students. On many college campuses, including Penn State, some students seem to glorify lack of sleep, almost bragging about getting three hours of sleep compared to someone else's six. This culture, along with the increasing competitive nature of college as a whole, has led to a deterioration in the mental and physical health of students. Exams, extracurriculars, social life, and more all take up enormous amounts of time, and as students' amount of sleep goes down, their stress levels go up. Scientists agree; poor sleep patterns among college students significantly contribute to the severe stress and mental health problems in today's generation of college students.

"On many college campuses, including Penn State, some students seem to glorify lack of sleep, almost bragging about getting three hours of sleep compared to someone else's six."

Across the country, students at different institutions of higher learning have launched initiatives to combat this problem, and to increase the amount their peers sleep and to supplement their mental health. At Penn State, the 2016 class gift supported student mental health by funded the Counseling and Psychological Services (CAPS) initiative. But there is still more to be done.

Through the Huffington Post's Sleep Revolution, we hope to inspire students at Penn State and across the country to improve their state of mind and quality of sleep. When the #SleepRevolution comes to Penn State, the Huffington Post will be joined by the organization Scholars Helping Scholars and former CEO Lou D'Ambosio to provide education about sleep on college campuses as well as giveaways of snacks, pajamas, meditation tools and sleep gadgets. We look forward to seeing you there! 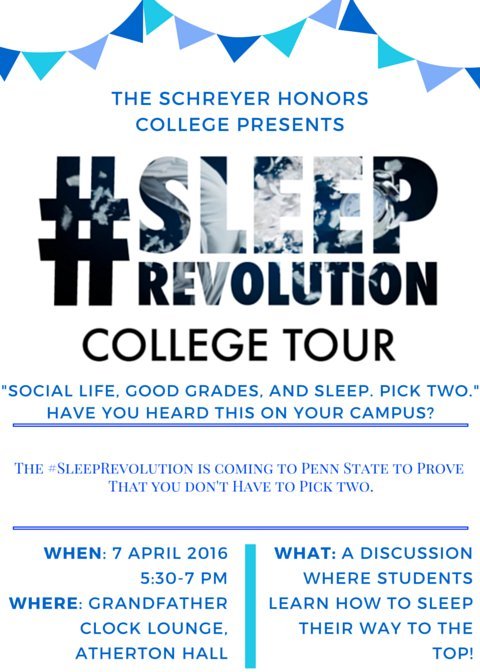