At CES 2015 the biggest loser was sleep. Collectively, I'd venture to say the 170,000 plus attendees lost at least one million hours of collective sleep (based on a two-day stay in Vegas). Whether they were in search of a pay-out slot machine or a hot new product, they were also bound to run into lots of products to help them find out how much sleep they were losing. In the fitness and health areas of the show floor, you couldn't move without bumping into a product designed to help you quantify your sleep.

But measuring sleep is a bit ephemeral. There are two certainties. First is that you can get widely differing analysis of your sleep from different devices. And second, while they're getting better at measuring your sleep, they're pretty clueless about prescribing a remedy for the sleepless.

The Consumer Electronics Show may be the extreme, but more than 25 percent of the people in the United States report not getting enough sleep, and about 10 percent of people have chronic insomnia. Researchers know that a lack of sleep leads to poor health often played out in mood disorders, obesity and cardio vascular issues as well as being more susceptible to illness. According to the National Sleep Foundation, 70 million Americans are dissatisfied with their sleep. As a matter of fact, the foundation is working with the Consumer Electronics Association to help create standards for measuring sleep and setting standards for sleep data collection.

In Vegas where lack of sleep goes with the territory, I got to try out a number of products to both monitor the duration and quality of my shuteye and to even get some help upping my sleep quotient. The scene was very different than just one year ago, where sleep monitoring was mostly to the form of wearing a fitness bands or smart watches. This year, some of the more interesting products were non-wearables. They measure your sleep quality and duration from an unnoticed position under your sheets, atop you mattress.

Withings undoubtedly has the largest ecosystem of products: from activity watches, to scales, to sleep monitoring, they can paint a broad picture of your health. The product they announced at the show, Aura, is designed to monitor sleep by attaching a sleep sensor to your mattress.

Withings Aura is not alone. RestOn, from a company called SleepSpace, slips over your mattress like a belt and its app can monitor how many times you toss and turn, get out of bed or breathe unevenly. RestOn measures sleep time, heart rate, respiratory rate, body movement and sleep cycles and then through a synced Bluetooth connection, the SleepSpace App analyzes sleep data and provides users with some tips (like not drinking caffeine after lunch). Since my husband and I sleep together we were a bit confused about whose movements were actually being monitored.

Beddit, a similar non-wearable sleep monitor that fits like a belt on your bed comes from Finland and is similar to RestOn but its application is a bit easier to interpret. Beddit's apps scores how your night went each morning, in addition to giving you a breakdown of everything from snoring to respiration. It uses a technology called ballistocardiography (BCG) where an ultra-thin force sensor measures sleeper's night time activity.

SevenHugs takes the concept one step further by monitoring an entire family's sleep at once. It has one central source and a number of additional sensors that can be placed under household bedding to monitor your entire family's sleep patterns. The only disturbing part of this? You'll get an alert when your kids wake up in the middle of the night, which can only mean less sleep for you.

Even SleepNumber, the first mattress to recognize the importance of personalization, had its own version of a personalized mattress with SleepIQ, the x12 bed. The mattress tracks and monitors a person's sleep, offering adjustment tips to help them get a better night's sleep.

By far the majority of the products are monitoring sleep, but a few are trying the high tech equivalent of a glass of warm milk. Sleep Shepard, a high tech bedcap, with built in earphones and sensors, monitors your brain and then delivers a special binaural tone -- almost a white noise that lulls your brain. 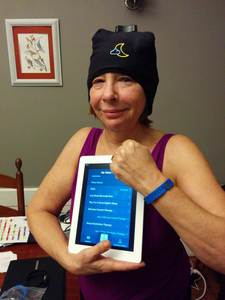 [Sleep Shepard and SleepSpace pictured above]

SleepSpace will accept reporting about your sleep whether it's a manual journal or a FitBit input and then offer recommendations and suggestions based on your patterns.

At the moment, sleep wearables and non-wearables are still in their infancy. There is no one standard and each has their unique ways of measuring and relaying the data. For the moment, these sleep aids should be bought by those in dire need or those committed to the quantified self-movement. 2015 will be the year we spend learning about our sleep patterns and trying to change them for the better, but it's in 2016 that the software will evolve to really be useful.