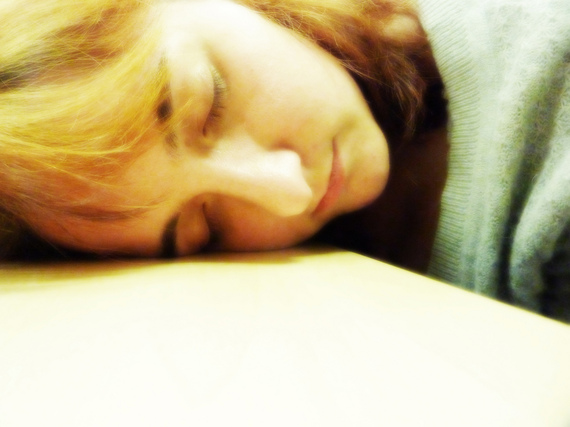 During my college days I had a love affair... with napping. During my first semester, I developed a "power up" ritual -- a 30-minute nap followed by a 20-minute jog (and, occasionally, by a RedBull). This ritual would turn the drowsiest of days into opportunities for evening productivity and/or party going.

When I left Amherst, I also left my "power up" behind. As I started my first post-college job at a boutique event production firm in Chinatown, an afternoon nap was out of the question. I would leave work at 6:30 p.m. or 7 p.m. every day and would rush to the gym, to a friend's apartment, to a happy hour -- anywhere but my tiny Lower East Side studio! Late nights and early mornings meant that I rarely got more than six hours of sleep a night. I started to exhibit a number of the typical effects of sleep deprivation, including weight gain and forgetfulness.

In an effort to stay present at work despite sleep deprivation, I experimented with new rituals. A 2 p.m. coffee break became my afternoon energy boost. I was in good company. Did you know that caffeine is consumed daily by 90 percent of North Americans?

On days where I couldn't escape for coffee, I suffered debilitating caffeine withdrawal headaches. I'd also heard that Bill Clinton (who famously got four to five hours of sleep a night) drank water constantly to stay alert. I started chugging multiple two-liter water bottles each day, which kept me super hydrated but led to constant bathroom breaks throughout the day!

Then something amazing happened -- after about six months on the job, my boss changed his schedule around so that he could pick his young children up from school each afternoon. Suddenly the small office that we shared was all mine around 3 p.m. Miraculously, I had the opportunity to sneak in that afternoon nap once again. This was long before I started studying workplace well-being, and long before I realized how many of history's most successful individuals (Winston Churchill, JFK and Eleanor Roosevelt to name a few) were proud, unapologetic nappers.

Since "sleeping on the job" has long been associated with laziness, I was terrified of being discovered. But because my afternoon naps had such an obvious positive effect on my ability to function in the later hours of the day, I made every effort to sneak them in.

Little did I know that an ever-growing field of research around napping was gaining popular interest. For example, a 2010 study compared caffeine with napping and placebo conditions on visual, motor and verbal memory tasks. Surprisingly, while on caffeine, verbal and motor skills actually decreased. Napping, meanwhile, enhanced performance across all three categories of tasks.

Napping studies have actually been around for quite some time. Scientist David Dinges helped found the modern science of napping in the early '80s at the University of Pennsylvania School of Medicine. His research found that short periods of sleep improved alertness, memory, motor skills, decision-making and mood.

Though our society's relationship with napping has evolved, it's still complicated. For many of us, getting seven to nine hours of sleep a night just isn't possible. Studies show getting more sleep can lower risk for a handful of health problems, from high blood pressure to obesity and diabetes. Although naps are an efficient way to make up our sleep debt, most offices just aren't equipped to handle midday snoozefests.

However, if you do have access to a nap-appropriate space at work and would like to experiment with naps, there's good news: The ideal length for a power nap (for most people) is just 10 to 20 minutes. That's less time than your average coffee break! Deeper stages of sleep kick in during longer naps, which can lead to grogginess and interfere with nighttime sleep. Our bodies start exhibiting signs of tiredness about eight hours after waking up, so the best time for a nap tends to be between 2 p.m. and 4 p.m.

Companies like Google, Procter & Gamble and The Huffington Post are at the cutting edge when it comes to creating napping space for employees. They and hundreds of other companies have purchased high-tech, light-blocking energy pods, which feature nap timers, calming ambient noise and a research-backed ergonomic design.

Energy pods are a great solution, but they're not cheap -- a top-of-the-line model will set you back $13,000. The fact that so many companies are willing to shell out demonstrates a grasp on the clear ROI napping opportunities provide.

Alternatively, many companies have created lower-cost napping opportunities for employees. For example, the digital marketing startup HubSpot has a napping room with a comfy hammock and a soothing tropical wallpaper mural in their Boston office. Nike offers "quiet rooms" that can be reserved for naps or meditation.

If you're looking to set up your own office napping space on a budget, make sure to choose a non-windowed space or a space with light-blocking shades. Sofas, beanbag chairs and air mattresses are all great options. Cooler colors like blue, green and violet evoke feelings of restfulness and peace.

If there's no designated napping space at your office, try closing your office door, dimming the lights and putting your head on your desk. Bring a small travel pillow to the office to further increase your comfort.

I still think back fondly on those 3 p.m. naps at my little office in Chinatown. Nowadays, my company, Exubrancy, works out of a shared workspace in Soho. There's virtually no private space, so once again my napping options are limited. But, as the company's CEO, I have the luxury of creating my own schedule.

Getting 7.5 hours of sleep has become non-negotiable. And if I do feel drowsy in the afternoon, I turn to Calm.com for a quick meditation session. Once Exubrancy moves to a larger office, I look forward to creating our very own napping room and just maybe splurging on our very own energy pod one day!