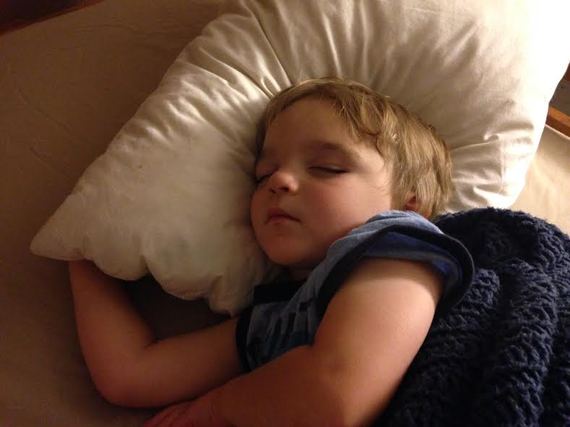 They say sleep deprivation is a lot like walking around drunk.

That must be why I keep running into doors and passing out on the couch and forgetting where in the world I put the baby's clean diaper when it's literally right in front of my face.

After the first baby, all those people who have walked in our shoes give us that helpful advice: "Sleep when the baby sleeps." And if you're like me, you don't realize they're serious until you've spent 60 hours awake.

It always makes me wonder if they ever really had more than one. It's just not helpful advice once you've passed the first baby.

Kids, you see, at least a tribal group like mine, need constant supervision. The only time I sleep is when they're ALL sleeping. Which is never.

(Actually that's not true. My kids sleep like champs. In their beds by 8:30, the first one usually falls asleep by 8:45, and the last one by 10, and then that first one will wake up by 6. Which leaves me a whole four hours for sleep, after I finally wind down from the thirteen times I almost dropped into dreamland only to hear a knock on my door from the one who needs to tell me about that new character he's developing for the story he's writing or another one who needs to tattle on a brother for kicking him in the face or another who just wants his third kiss goodnight.)

Sleep while the baby sleeps.

Oh, I wish it were that easy.

Once, when I slept while the baby was sleeping, my 8-year-old, 5-year-old and 4-year-old boys climbed to the top of our minivan parked out front and decided to see what it would be like to pee off the top, in clear view of every house on the block (sorry neighbors).

Another time I passed out involuntarily, I woke with a start, five minutes later, because I heard something clinking in the background. Turns out it was my 2-year-old twins, racing out the back door with knives they wanted to use for sword fighting.

And how could I possibly forget the time I took a twelve-second nap and my 5-year-old ate two pounds of grapes?

Sleep while the baby sleeps.

I wish I could, because I'm exhausted.

Another piece of used-to-be-helpful advice that is no longer relevant after the first child: "Make sure you take care of yourself, too."

Well, see, I tried it one time. I tried putting up my feet for 10 minutes of quiet in my bedroom. Just 10 minutes. When I came back out there were 100 paper airplanes scattered all over our living room floor, courtesy of the 8-year-old.

Another time I went to the bathroom for no more than two minutes, and my second son located a black permanent marker and turned his yellow shirt into a black-and-yellow striped shirt.

And then there was that time I felt brave enough to rinse off in a fifty-two-second shower, and my 4-year-old used the time to cut a chunk out of his hair, draw whiskers on his face and glue his hand to his shirt.

I tried holding him every minute I could. And then a 2-year-old figured out how to open the under-sink cabinets, even though they're baby proofed, and sprayed vinegar cleaner all over the floor so his twin brother would slip in it and bust his head on the tile floor.

There was that time at the children's museum I tried to hold him and stare in his eyes for five seconds or so, and the 2-year-old twins snuck into an elevator and we searched for them for twenty whole minutes, nearly giving them up for lost before the elevator door dinged and out they came running with grins on their faces and not enough vocabulary to tell us what exactly they were doing in there.

Once, when I thought I'd feed the baby in the privacy of my room so we could share some one-on-one time, because the 2-year-olds were sleeping, one woke up, unbeknownst to me, and colored his entire door red. It's still a mystery how that happened, since there are NOTHING but beds and clothes in their rooms. I think he was hiding a crayon under his tongue.

And to all the people who are trying to help: Thanks for your thoughts, but I just can't use all that well-meaning advice anymore.

When I was talking it over with my husband, trying to figure out a new plan, some way we might be able to sleep while the baby was sleeping and hold him all we could and take care of ourselves, he looked at me for a minute and said, "Maybe we just need to invest in some kennels."