During the art fairs this week as thousands of people entered and exited The Armory Show, Scope, NADA, Volta, Independent (and many others), real living things shaped as art silently stood on pedestals within the walls of Feature Gallery on the Lower East Side. These works will live forever - literally. The artist, Jennifer Sirey, has miraculously combined beauty, body, phenomenology, science and magic. This is part of a two person exhibition: Jennifer Sirey: Sculpture; Richard Bloes: Reading Chair for Don Quixote Reading. 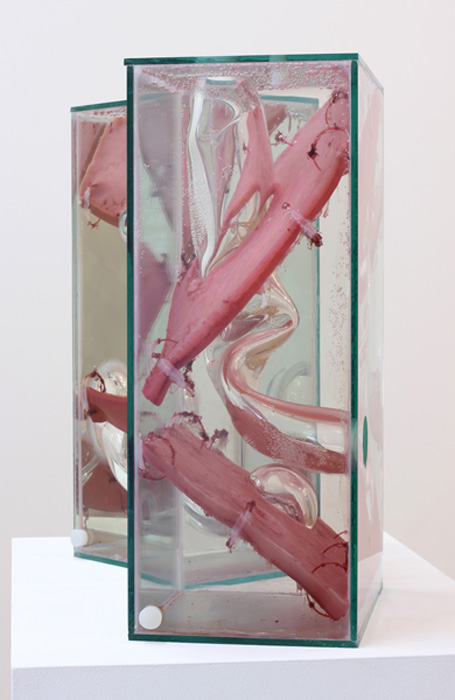 LI: The process involved with your work is incredibly interesting. Could you talk a bit about it?

JS: The planes are made of acetobacter or "Mother of Vinegar" which is a colony of yeast bacteria. I fill the tank with wine, the Mother and some of the vinegar that I had made before. I then tilt it until the surface level is where I want the membrane to grow. A thin film begins to develop on the surface of the wine and continues to get thicker as long as it is left still and warm. Before I put the vitrine together, I plan where I want the bacterial planes to grow and silicone some monofilament rings to the inside of the glass- for the bacteria to adhere to. It only grows when it's on the surface and can absorb oxygen, sugar and alcohol, changing it to acidic acid/vinegar. For these pieces, it took about 3 weeks for each plane to grow and they stop growing once they are submerged. After the layers are grown, I flush out the tank because otherwise it would be too dark to see the membranes. I pour water through the top hole while draining the wine/vinegar out through the bottom hole. The bacteria is colored from the wine or sake and the finished piece is full of water and white vinegar and is air tight, so that the planes are visible. Draining is a pretty intense process. In some ways it can be compared with giving birth - or a blood transfusion.

LI: I did a little research on bacteria for this project and was overwhelmed at how much there is (of it) and how little there is known (about it). What are the key elements about bacteria that made you want to work with it?

JS: I've always worked with this kind of science/phenomena theme. I started growing these particular bacteria by accident because it grew on one of my test tubes. (I was growing algae). I let things float and sink inside tanks of liquid as well as let things crystallize. But these bacteria happened on its own - I didn't know what is was at first but I knew that I liked it. I researched what it could possibly be because I needed something that could stay alive within the closed container.

I also like that it looks like skin. There's viscerality - and a feeling of it being inside the body - a tissue look and feel to it.

I like that I can make geometric planes with it inside my sculpture. That it's an organic substance that can exist as hard edged geometry. 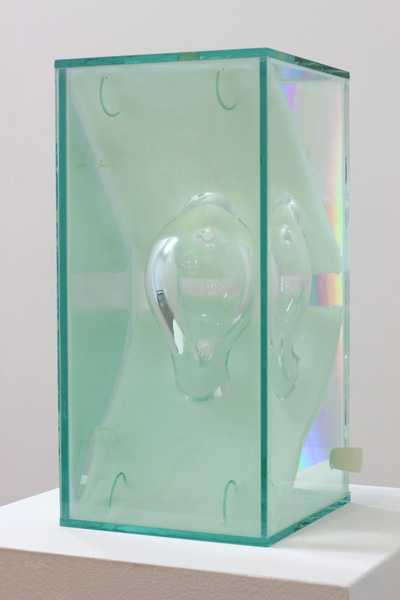 
LI: I've read about your work connecting with the body - is this is true? If so, how so?

JS: I want someone to have a relationship to it like it's in all of us - because it is. I think about the inside of the body a lot and what it is. The body always has a lot to do with appearances and display. What's attraction and what's repulsion? What makes something ugly or what makes something beautiful.

LI: Are they gendered?

JS: Good question. They're not really gendered but if they are they're female. At least some of them -- in that there are more holes. One of the pieces I've shown in the past, here at Feature, is called Three Holes. That's definitely female. I don't know what this particular one is. (Sail, 2013) I don't see it necessarily as female or male. Though I treat them like girl in a way -- in terms of presentation. Like with Sail, -- The color bugged me. It was slightly duller. I thought to myself, "It needs lipstick!" 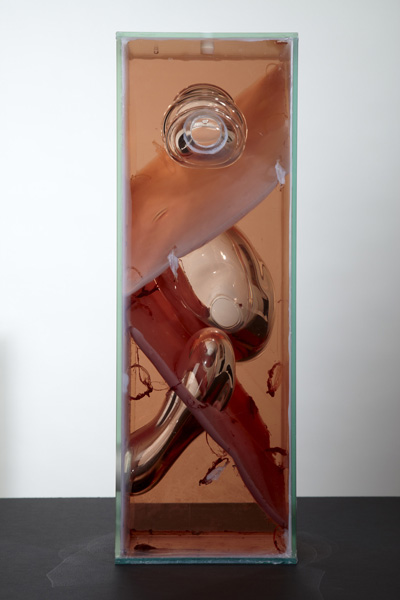 LI: Also it's pretty cool that the entire sculpture is the inside. It's really hard to wrap one's head around. The outside structure is clear and the inside is alive.

LI: This moves into my other question about how it relates to inner worlds in general. These are pieces of skin with very vaginal like portals that can also be viewed the other way - they could be phallic. But it goes in and out -- and then they're exposed. They seem vulnerable, but are also incredibly protected.

JS: It relates. They are vulnerable and raw but also strong enough to stand there, exposed like that. This is a part of human experience, especially a woman's experience. I think of the Cliché -"Beauty is in the inside." I remember hearing this as a kid and tried to think about what it's like in there (on the inside).

JS: This is the other thing I'm thinking of lately - a Star Trek thing - Aliens - in one episode on The Next Generation, which I love, (now we're watching them again with my son (laughs)). The aliens come to the starship and everybody's tortured and they hate humans and something's going on - they're invisible - but they're able to communicate - and they call all the humans, " You ugly bags of mostly water!" It made me wonder what makes one bag of mostly water more attractive than another bag of mostly water. The vaginal stuff and the holes can be seen as grotesque or sexy. 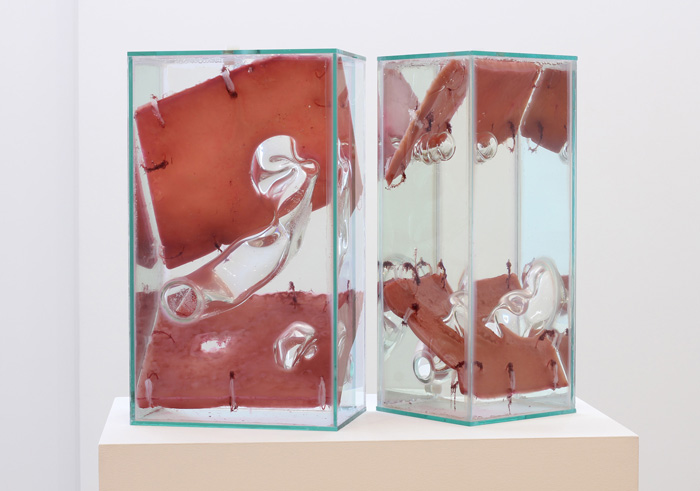 LI: It's sexy and it's gruesome. It looks like skin but it's cut up. It looks sewn. It's Silence of the Lambs. But you can't ever pin it down. Not really.

JS: That stuff fascinates me. I used to sew it. Take it out and sew it.

LI: Do you see this as collaboration with the bacteria? There's control here, yet it's alive.

I do actually, I don't think so much of the bacteria as a personality but it's a colony - so it's not a person but I definitely see the pieces as a character. But in some ways I do (see it as a personality) because I have to work with it - whether it grows or it doesn't grow. Sometimes the environment isn't right for it - mold grows instead - which will kill it. There are different things that can happen.

LI: You have to make sure it's happy.

JS: Exactly. You have to make sure it's happy. So it's a good strong growth. But it is controlled. I have to make sure the bacteria are going to grow in the imposed, rigid situation that I create. I'm trying to make it geometric. There's a lot of preparation. I do tons of drawings to figure out where the planes are going to go. How it's going to touch each face of the glass. It's taken a while to get it to the point where it's clean looking.

After I set it up -- I leave. It takes over. So it's totally collaboration. I do the beginning part - the planning - set up an environment - make it a home and make sure it's in the right temperature -- and then it has to do the rest. I can't touch it or move it while it's growing. Otherwise it will sink and stop growing. I like that something else takes over - so that you can't see my hand in it -- that I'm not doing it anymore - something else is doing it. It's collaboration and it's like magic in a way. Well, it's science.

LI: Are they immortal or are they ephemeral. Will they last forever because they're in a dormant state?

JS: Yes. They will last forever. They could (if they stay airtight)

LI: Wow. They're immortal. They're living but they're dormant. 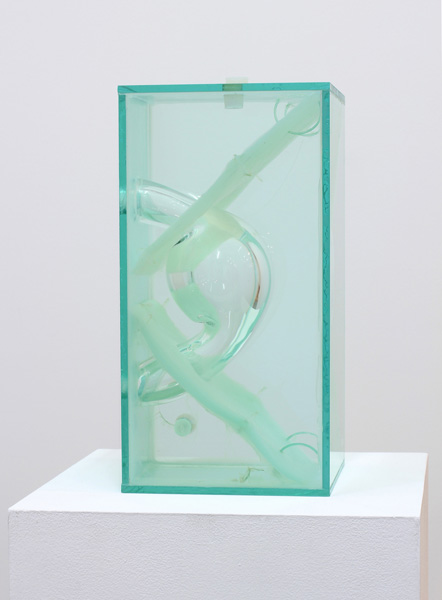 Liz Insogna is a painter in New York. http://lizinsogna.com/home.html