Getting sleep when you are on the road is a monumental challenge for virtually every touring band. Legend has it that Keith Richards, the indestructible guitarist of the Rolling Stones only slept about two days a week for years. For the members of Carbon Leaf, this potential pitfall is not an issue. "Sleep is easy. Waking up is the problem."

For over 20 years, Carbon Leaf has been honing their musical craft that deftly blends folk, country and Celtic and rock elements. While their musical identity has evolved and matured on the road, so, too, has the band's ability to find healthy sleep while touring.

Barry Privet, 42, the lead singer and a founding member, sits comfortably with the rest of the band before a show supporting their newest album, Constellation Prize. The topic of sleep immediately steers the conversation back to the early days of the band. "When we were 20, we were working regular jobs, and doing this, too," recalls Barry, as he recounted early gigs playing fraternity parties and clubs along the East Coast. The schedule left little time for sleep. "We would often drive through the night," recalled Barry, noting that driving duties were equally shared among the band. 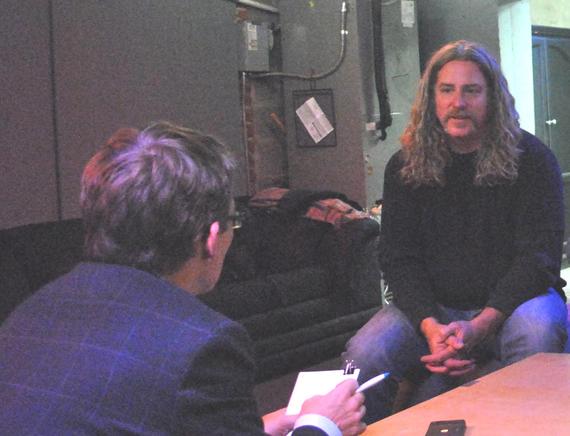 Early on, the band's sole focus was on music, as guitarist and founder Terry Clark, 42, explained. Sleep was an afterthought. "My secret to sleep was liquor and Tylenol PM." Terry and Barry paint a vibrant picture of young and hungry musicians pushing around the clock to make it. "The more we kept doing this, the weekends kept getting longer. Friday to Saturday became Thursday to Sunday, and then Wednesday to Monday."

The accelerating grind of the road took its toll. Long nights traveling between cities and grabbing guerrilla-style naps in between interviews and shows began to wear on the members. Barry recalled a late-night scare while driving to a gig. Driving in his 20s was never a big deal, however in his 30s, things suddenly changed. "While I was driving down the road, my vision would get blurry. What I came to realize was that my sleep cycle was shifting and pulling these late nights was just getting harder." Experiences like this slowly pushed the band to reconsider its marginalization of sleep. "In my 30s, I decided I needed at least seven hours."

As the group took their music to new levels, their sleep patterns were following a similar positive trajectory. Members honed new methods to find quality rest on the road. Terry found a noise machine to be invaluable. "I rely on white noise on a loop. It is awesome. It's how I deal with 26 shows in 28 days." The bandmates all agree that their sleeping on tour has improved. "Don't tell my wife, but I sleep better on the road than in my own bed," admits Terry with a grin.

Finding sleep while driving from show to show has been a personal triumph for Barry, who feels he has perfected the art. "I have a method for sleeping in the van. I cross a blanket that is behind my head over my chest and tuck the ends under my arms. I then stack three pillows on my lap. This helps keep the blanket securely in place. With a sleeping mask, I feel like I'm in a state of suspended animation." 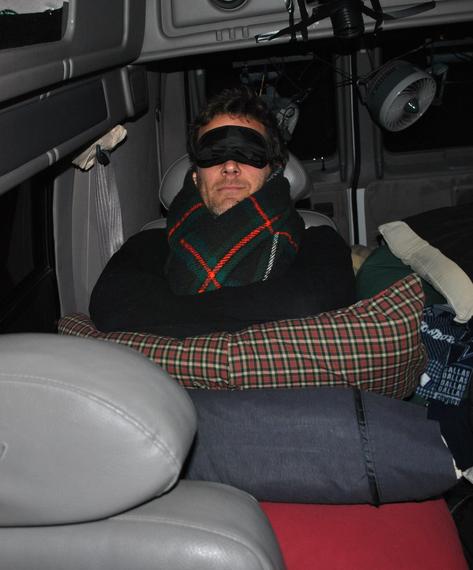 For Jon Markel, 37, sleep on the road is not as easy. "I can't do that thing they do. I don't understand how he does it," the bassist muses. "When I sleep in the van, my hips hurt, my back hurts. I can't sleep like a squirrel in a nest."

Barry moves on to the current tour. "Now that I'm in my 40s, I need eight square, plus." He admits, saying that sleeping properly makes a difference in everything, including how his voice feels and holds up. As a younger performer, nights of poor sleep or no sleep could be shrugged off. This is no longer the case. "If I go one night without my [blanket and pillow] method, my sleep is bad and I feel it."

The members of Carbon Leaf all credit better eating on the road with their individual improvements in sleep. "I eat better now on tour and have really tried to curb the comfort foods," says Barry. Terry adds that Barry made a valiant effort to avoid Coke and soda during their current tour. "It lasted two weeks. I thought that was pretty good," laughs Barry.

Their diet has clearly been influenced by newer members of the band. Jon describes his dietary method for dealing with the road. "I travel with a cooler with apples, peanut butter, probiotics, yogurt and granola." Barry thinks back to the early days where fast food was a staple of the tour. "We now try to stick to healthy dinners and normal food, like Subway sandwiches." Drummer Jason Neal, 33, adds that while eating has improved, adding a "huge fridge" to the bus would make things much easier, especially late at night. "Yeah that's true, at night there seems to be a lot of Dunkin' Donuts on tour," quips Barry. "And we are always looking for breakfast food."

As the brain becomes fatigued, chemicals responsible for poor food choice become more abundant and the collective brains of Carbon Leaf are not immune to these responses. As Jon delicately puts it, "At some point during the last few days of a tour, you hit the 'f'-it stage." Proper eating goes out the window as powerful biological forces seem to point the tour van directly towards a bright red beacon in the night.

"Sheetz," they all proclaim in harmony, if not in unison.

The conversation quickly turned to guilty Sheetz pleasures and various delicacies at the top of each band member's list. Barry answers immediately and everyone agrees, "ice cream."

Jon adds, "We all like dessert, ice cream, milk shakes. "

With the current Carbon Leaf tour set to wrap up December 21, the band has already turned an eye toward life off of the road and the radical schedule changes it entails. "Once we are back off the road, we adopt a nine-to-five life. It's completely a flip-flop," explains Barry. "Sleeping at home can be difficult, too." Jon agrees, "My sleep will be messed up for a while. I will toss and turn at night and find it hard to simply mow the lawn during the day."

Slowly the stresses of the road fade and give way to the worries of owning a small business. Sleep rhythms are re-established and the five pounds Barry has lost from touring slowly return, just in time to head back out to share their songs with growing numbers of fans. And with a new tour, a chance to further perfect the art of sleeping on the road. For Terry, the quest for perfection could be solved easily--with runaway success. "There is not a lot big money won't fix!" he laughs.

Or a f'real milkshake, apparently.

All band photography by Maeve Janelle

More:
healthy livingsleep deprivationrock and rollSleep
Newsletter Sign Up
An essential daily guide to achieving the good life
Subscribe to our lifestyle email.
Successfully Subscribed!
Realness delivered to your inbox