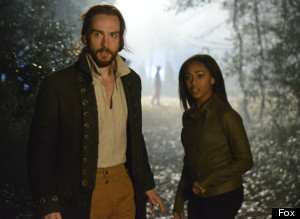 Do not read on unless you've seen "The Indispensable Man" and "Bad Blood," the episodes that made up the Season 1 finale of "Sleepy Hollow."

That finale was even more bonkersawesome than I dared hope. I did take notes on those two episodes and I'll share those thoughts below (and in this Talking TV podcast), but it's always a good sign when I stop taking notes while I'm watching a show. I was so engrossed in the last couple of acts of "Bad Blood" that I just sat there, marveling at what a wild ride it was.

There was a lot to savor: A terrifyingly tense family reunion! Abbie recovered her memories! Henry Parish was revealed as Jeremy Crane! Henry/Jeremy gave Katrina to the Headless Horseman and buried his dear old dad! And somewhere in the midst of all that, Ichabod got new pants! Not the dreaded skinny jeans, thank the Lord.

That ending packed quite a wallop, and I'm sure the show's producers are going to be pelted with questions until the show returns next season. Among the more burning questions I have are the ones below (and please feel free to leave your questions in the comment area):

1. Is Jenny dead? I highly doubt that, given what an integral part of the ensemble the character and the actress playing her, Lyndie Greenwood, have become. The scene between Jenny and Abbie in the gang's hideout was one of my favorite moments of the season; the actresses share a great vibe and the writers have done an especially good job of writing for them in the closing hours of Season 1. Last week's episode, "The Vessel," did a fine job of deepening the sister's relationship (we know now that Jenny stayed away from her sister in order to protect her), and the season as a whole has given us a lot of insight into their formidable defenses and their unbreakable bond. As was so often the case in the "Sleepy Hollow" finale, their relationship was given time to breathe, and that conversation between the sisters made their individual fates that much more surprising and effective.

2. What will the Horseman do with Katrina? As I've written before, I have nothing against the actress Katia Winter, who plays Ichabod's wife, but Katrina being stuck in Purgatory limited the utility and impact of the character, and her otherworldly state made that relationship seem less important. As Ryan McGee and I discussed on the podcast, putting Katrina in the real world with her husband puts a lot of great potential developments on the table, so I'm glad that she's among the living once again (perhaps she'll have a less thorny relationship with modern fashion and technology?). But we've no idea what the Horseman plans for her -- presumably it's not anything good. Let's, er, face it: If he plans on rekindling their relationship, making out appears to be out of the question.

3. Who will rescue Ichabod and Abbie if Jenny and Katrina are out of commission and Frank Irving is in jail? Oh my, the writers have given themselves a lot of problems to solve when Season 2 begins, but I relish the idea of them untangling those knots even as they create even more knotty dilemmas for the anti-Apocalypse crew.

It's those moral and personal dilemmas that have elevated "Sleepy Hollow" from the ranks of "satisfying" to "excellent" and "frequently awesome" for me. There were wobbles here and there as the world and the characters were developed over the last few months, but for the most part, Season 1 recalled solid, exciting and emotionally satisfying seasons of "Angel," "Buffy," "Supernatural" or "Farscape," among other examples I could cite. The best genre shows use the elasticity of their rules regarding life, death, time and punishment to explore why people are willing to make certain sacrifices, and to create compelling character portraits. As is the case with the best supernaturally-tinged dramas, this show is chock-full of people with believable faults and credible wishes to help themselves and others -- and who regularly have to choose among terrible options.

"Sleepy Hollow" really nailed those foundational ideas about loyalty and sacrifice in its first season, and it was blessed with a cast that could run with anything that was thrown at them -- and then some. That allowed it to exceed my hopes for what it could accomplish and to unify what could have been a jarring mixtures of tones, aesthetics and moods. Everything from the light comedy of Ichabod at the historical re-enactment to the freakiness of Moloch summoning his minions to the bittersweet yearning of the fake Purgatory scenes worked like gangbusters. This world has a lot of flavors but they don't clash, they harmonize.

I'll put that another way: When a show's got Zombie George Washington roaming around and that seems completely credible and normal (not to mention awesome), well, that show is doing something very right.

There were so many things to savor, from the lines that will be fueling the Sleepyheads for months ("Admit it, you admire me a little bit." "Microscopically.") to the slower, quieter conversations to the whooshing sense of momentum that the finale built as it cruised to its climax. Here are just a few of my favorite moments (and again, share yours in comments):

Some questions or quibbles that I had (and they're minor):

Given that this is a show about time travel, more or less, let's travel back to September. When "Sleepy Hollow" debuted, I wrote about how much I enjoyed this show but I was honest about the fact that I thought there was a good chance it would fall apart within a few weeks. "Sleepy Hollow" not only didn't fall apart, it built on its many strengths as the season developed and turned into a full-fledged addiction. And that finale was legitimately badass.

I will miss you, you bonkersawesome, exciting, funny, sweet, emotionally intelligent and wonderfully satisfying show. Come back soon.

Ryan McGee and I talk about the "Sleepy Hollow" finale in this week's Talking TV IchaPod, which is here, on iTunes and below.