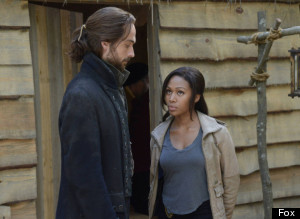 There's recently been a pleasing surge in what I call "bonkersawesome" TV shows. This trend is exemplified by "Scandal" and the "American Horror Story" franchise -- but you can also see it in the intermittently delightful new Fox drama "Sleepy Hollow," as well as obscure gems like "Banshee" and "A Young Doctor's Notebook."

There's something endearingly demented about these shows, which spend a lot of time teetering on dangerous edges. They're ridiculous and exhilarating, funny and sad, exciting and illogical -- in quick succession or all at the same time. They often prioritize atmosphere, mood and tone over things like logic and structure. Plot is important, but usually as a conveyer belt of incidents the characters must react to or deal with. As I said on Twitter the other day: They're loony, but they commit.

These shows, when they're working, are smart and subversive. They take great delight in thumbing their noses at elements that are expected in mainstream broadcast dramas or fetishized in realm of Prestige TV: symbolism, musings about morality and mortality, linearity, solving crimes or closing loopholes. These things take a back seat to the creation of moods, moments and a sense of careening possibility. To bonkersawesome shows (and to their cousins in the recent wave of "B-movie TV"), prudent half-measures and smug restraint are equally pointless.

Bonkersawesome shows want you to feel something, and they may make you hurdle toward that emotion before you're quite ready, but that heedless energy is part of their charm. The whole point is to overwhelm the logic centers of your brain with momentum, emotion or some other kind of intensity. They can be excessive and sloppy and frustrating, but they're usually bonkers in pursuit of something, and that something is occasionally awesome.

But, as I said, they also spend a lot of time poised on the brink of disaster. The granddaddy of them all, "Twin Peaks," did a fantastic job of establishing weird moods, distinctive characters and strange tableaux, but it had collapsed in a heap of unsupportable strangeness well before it fizzled out. "True Blood" was pleasingly semi-chaotic and memorably demented in its early seasons, but these days it skitters along with no particular purpose -- aside from having hot people disrobe, obviously.

The truth is, modulating a show like this and keeping it from spinning off into a fever pitch of blathering insanity isn't easy. It actually requires discipline, imagination and a cast that has the range to handle the extensive suite of emotions they're called upon to express. Not every episode of "Sleepy Hollow" has been as swell as the pilot and the terrific Oct. 7 installment, but a huge part of what makes the Fox show work every week is the chemistry between Nicole Beharie and Tom Mison. The actors are very skilled individually, and they're even better when they're bantering together. It's not quite the "Scandal" of mystical/supernatural shows, but, much to my surprise, it looks like it's heading that way. (Pun not entirely intended.)

Mison's charisma is a huge part of why the show works as well as it does. The opening scene in "The Lesser Key of Solomon," in which he had a heart-to-heart with an emergency operator, was one of the most entertaining things I've seen this fall. Beharie's committed intensity was also commendable in a couple of long dialogue scenes in that episode -- and it's encouraging that "Sleepy Hollow" can be so effective in its least pell-mell moments. All those things, plus the hurtling, semi-mystical plot, conspired to make the story of a mystery sextant extremely enjoyable.

(Note to "Sleepy Hollow" writers: Yes, we know that you're required to service the mythology, and there are other promising elements, most notably Abbie's sister Jenny, that deserve more time. And of course, the upcoming guest arc of John Noble has me practically beheading myself with excitement. But allow me to offer some real talk: The stuff with Ichabod's wife tends to stop the show cold, and, honestly, mythology schmythology. Go ahead and build that structure, but you have something special with your two leads. You will never go wrong spending time on Ichabod Crane's tart, polite annoyance with modern life or dwelling on Ichabod and Abbie's relationship. I'm among the many "Sleepy Hollow" fans watching it for the banter, not for the supposedly imminent Apocalypse.)

Like any worthwhile bonkersawesome show, "Sleepy Hollow," which is one of fall's few hits, is genuinely interested in its characters. The whole point of shows like this is to put the leads into absurd, weird and difficult situations. ("A Young Doctor's Notebook," which stars Jon Hamm and Daniel Radcliffe, makes a middle-aged man constantly confront and upbraid his younger, more awkward self.) Bonkersawesome doesn't mean lazy or incoherent -- the best shows have relationships worth exploring and characters who find themselves via disorientation and discomfort. These shows, whatever their shortcomings, thrum with a sense of percolating purpose.

And one fall show that does not have that is "Reign" (9 p.m. ET Thursday, CW) -- unless you count "displaying aggressive stupidity" as a purpose. "Reign" gives me a pain.

The show appears to have been made with one purpose in mind: To ruin superficiality on the CW forever. Let it be known that I enjoy CW superficiality as a general rule, and on paper, a teen-oriented retelling of the life of Mary, Queen of Scots -- complete with pop-music soundtrack, royal sexytimes and rustling silk dresses -- sounds like my kind of thing.

But this show is so full of laughably dumb dialogue and nonsensical moments that it made steam come out of my ears. ("You said you had a country to think about. Were you thinking about Scotland in any of this?") If you want a bodice-ripper with a reasonably compelling lead and a very canny supporting cast, try Starz's "The White Queen."

If you want to know what a failed attempt at bonkersawesome storytelling looks like, try "Reign." Better yet, don't.

Update: Ryan McGee and I discussed "Sleepy Hollow," "Marvel's Agents of S.H.I.E.L.D." and "The Bridge" in a new Talking TV podcast, which is available here, on iTunes and below.