A police criminal complaint filed against two 12-year-old girls who allegedly stabbed their 12-year-old friend 19 times this past weekend offers dark reading about the vicious attack and the girls' alleged motive -- to prove the existence of a fictional creature named "Slenderman."

"Many people do not believe Slenderman is real [and we] wanted to prove the skeptics wrong," one of the girls said, according to the complaint filed by the Waukesha Police Department in southeastern Wisconsin.

On Monday, the two suspects were charged as adults in Waukesha County Circuit Court with attempted first-degree intentional homicide. Their victim, another 12-year-old from Waukesha, is hospitalized in stable condition. 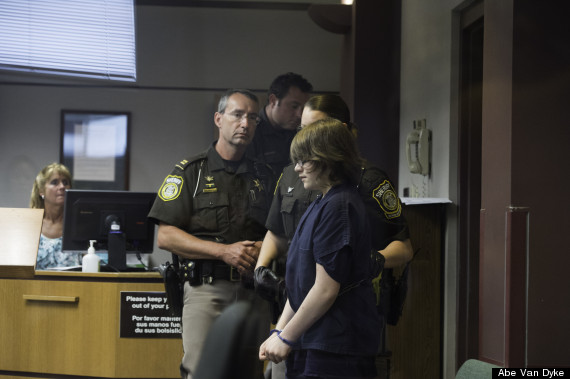 The suspects in the case are identified in court documents as Morgan Geyser and Anissa Weier. The Huffington Post is naming the suspects because they are charged as adults and their names have been made public.

The complaint alleges that Weier told police she learned about Slenderman on a website called CreepyPasta and then introduced Geyser to the site.

According to James McCann, co-founder of A Paranormal Group, Slenderman appears in crowd-sourced fiction about a demon-oriented character who stalks, traumatizes and abducts children. "It's believed to reach his realm level, you have to kill somebody," McCann said.

At least one of the girls said that she believed she would need to "physically kill someone" in order to "become proxies of Slender," the criminal complaint alleges. 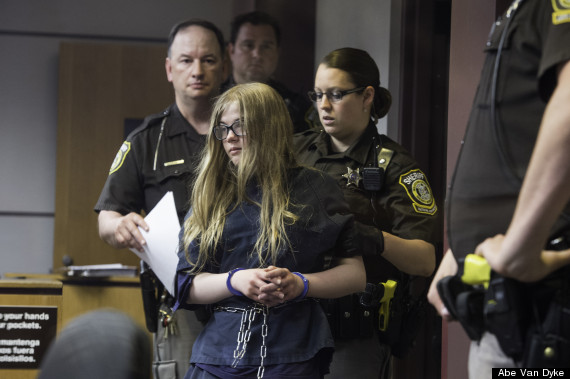 The two girls allegedly started plotting the murder earlier this year. For reasons not yet clear, they selected the 12-year-old victim, who has not yet been identified.

Law enforcement authorities say that Geyser and Weier set their plan in motion on Friday, when the three girls spent the night at Geyser's house. The criminal complaint alleges that initially Geyser and Weier intended to kill the girl the following morning, at a bathroom in a nearby park. Weier allegedly told police she knew the bathroom floor had a drain that the blood could run down.

On Saturday morning, the girls went to play at David's Park, police said.

"As they left for the park [the victim] was walking in front of them and Geyser lifted up the left side of her white jacket and displayed the knife tucked in her waistband," the complaint alleges. "Weier stated she gave Geyser a look with wide eyes and, when asked what that meant Weier stated, 'I thought, dear god, this was really happening.'"

When the girls reached the park restroom, Geyser gave the knife to Weier so that she could hold the victim down, but then Geyser had a brief "nervous breakdown," the criminal complaint alleges.

The girls eventually went back outside and decided to play hide-and-seek. That game quickly turned into a fight for the victim's survival, when Weier allegedly ordered her to lie face-down and a brief struggle ensued, police said.

The complaint alleges that Weier told police that Geyser was initially hesitant to stab the victim and said, "I'm not going to until you tell me to." Weier allegedly replied, "Go ballistic, go crazy ... Now."

According to the complaint, Weier said that Geyser then tackled the victim and started to stab her.

The victim, despite her injuries, managed to get up and scream, "I hate you." She attempted to walk to a nearby street, but Weier allegedly grabbed her and pulled her back. Weier told police she asked the victim to lie down and be quiet and told her she would get help, even though she did not intend to do so, police said. Weier told police she hoped the victim would die so that Weier would see Slenderman, the complaint alleges.

The two girls then backed away from the victim and began what would have been a very long walk to the Nicolet National Forest in northern Wisconsin, where they allegedly believed Slenderman lived in a mansion.

The victim, who sustained numerous stab wounds to her torso, legs and arms, managed to crawl out of the woods. A passing bicyclist spotted her and called 911, police said.

The complaint states that the victim told authorities she had been stabbed by her best friend, Morgan Geyser. The two suspects were arrested shortly thereafter, while walking near Interstate 94, police said.

Geyser allegedly confirmed to police much of what Weier told them, but claimed Weier was the first to stab the victim, the complaint says. Asked by police what she was attempting to do when she stabbed the victim, Geyser allegedly said, "I may as well just say it: Kill her."

Geyser ultimately said she was sorry for what happened, according to police, but added, "It was weird that I didn't feel remorse."

During the girls' initial court appearance on Monday, Geyser's lawyer, Donna Kuchler, told The Milwaukee Journal Sentinel that her family "is very horrified at what has happened."

"I would say these girls had big imaginations and believed [in Slenderman] too much," McCann said. "[It] reminds me of the Salem witch trials -- it all started with a story [and] then got out of hand."