Kremlinology can be a lot like astrology, or like holding your ear to a box that emits all kinds of random tunes and gurgling noises, but never opens to let you see what's inside, or what any of it means. It's enough to drive a person mad. And on Friday, the Kremlin threw one of its weirdo riddles into the blogosphere by publishing photos of Vladimir Putin and Dmitry Medvedev having breakfast together. In another country this might have been engineered as a harmless and sentimental stunt. But here the room was cluttered with so much suggestive and random crap that Kremlin watchers nearly lost their heads trying to dissect the innuendo of it all. I bring you some of their frantic theories below, but first: Enjoy the slideshow.

The first thing we can probably take from all of this is that Victor Boiko the Great, the creepy Moscow dairy magnate, has been forgiven for his sins. In August, during the wildfires that nearly torched the country and helped speed the demise of Mayor Yuri Luzhkov, Boiko the Great announced that the heat wave was the punishment of God, and he immediately took action. All of his nearly 7,000 employees were ordered to get married in a church or be fired for "living in sin." The government promised to prosecute him, because as much as Putin adores the Orthodox Church, you can't just go around firing people for being single, for Christ's sake.

But here, less than two months later, we see the president and prime minister of the country shamelessly advertising Boiko's stuff. (The addition of "The Great" to his name is not the result of sarcasm here. This guy officially changed his surname by deed poll to Boiko-Veliki, or Boiko the Great, after a religious epiphany he had in prison.) But in any case, why is the Kremlin now plugging his milk? How much could he possibly have paid for this bit of product placement? Is there an advertising directorate that handles this stuff?

On Friday, a LiveJournal blogger let his suspicions go a little in a post called "Breakfast of the Audiophiles," and asked the pretty reasonable question: What the hell is with the reel-to-reel tape player in the background?

"The technology is spellbinding," he wrote. "What do these guys need a reel-to-reel tape player for? What do they use it to listen to?"

The post has gotten nearly 300 comments so far, with some of the LiveJournalists wondering whether the use of such an outdated appliance is trying to tell us something about Medvedev's plan to modernize the economy. "This isn't innovative at all," one of them writes. "They should have been drinking nanomilk."

Another recalls a Soviet photograph of a party boss seated in his office in full military regalia, with a bushel of wheat on his lap. In part, yes, this is the kind of crude symbolism we are given here: Putin and Medvedev are one with the people, one with each other, one with the fruit of the Russian soil. But with all the clutter in the room, the bizarre tableau they put together for the cameras, they also seem to invite the kind of manic conspiracy theories that Russians have become so good at after living for centuries under the rule of a gurgling black box called the Kremlin. I mean, seriously, is the high-tech coffee machine really plugged into an amplifier? And what's with that basket of Russkoye milk? Who put this thing together? Surkov, are you fucking with us?

Don't expect an explanation here. But it's amusing nevertheless that the Kremlin still uses this kind of subliminal agitprop. They probably just wanted to tell us that Putin and Medvedev are friends despite all the rumors of trouble in the tandem. (In this context, it's worth noting that Putin's website did not publish the photos, only Medvedev's.) But why this grotesquely elaborate staging? Anybody have any thoughts? I think I'm starting to lose it a little myself. 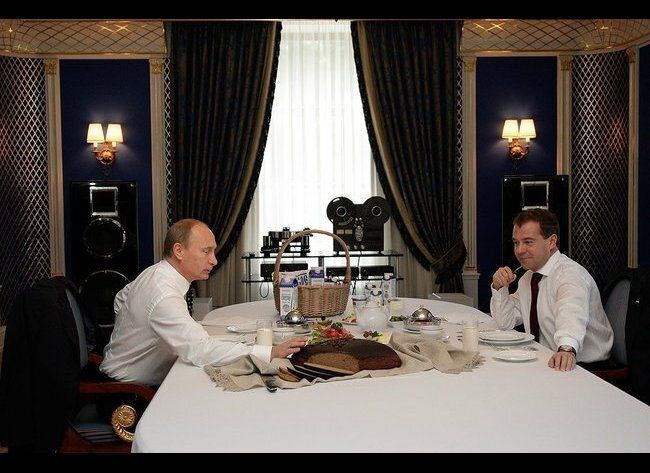 1 / 9
Putin Caressing Loaf
The loaf of bread here becomes a supple gymnastic buttock as Putin reaches over to fondle it. Medvedev looks on, struggling to restrain the giggles. But in the background hovers a reel-to-reel tape player, a thing that can be found these days in the back of a surveillance van, maybe, or a yard sale behind Lubyanka.