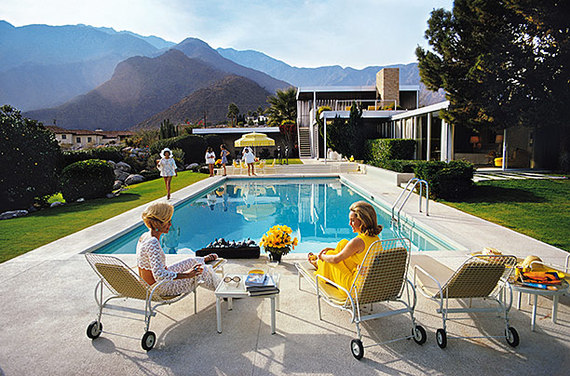 Now his daughter and former photo assistant, Mary Aarons, is revealing her father's techniques for creating the perfect shot.

Lauri Lyons: Where was your father, Slim Aarons, originally from?

Mary Aarons: He was born in New York City.

Lyons: Did he serve in the military before becoming a professional photographer?

Yes, he was in the Army during World War II. He was a part of the press corps. He started out in the darkroom and then worked his way up to being a photographer.

Lyons: Where was he stationed?

Aarons: North Africa (what would be considered Tunisia and Algeria now) and Rome. Rome was really his favorite spot. At one point he also went to London and Paris, and then all throughout Europe. His letters remind me very much of that film The English Patient. The soldiers were in some beautiful places, but some pretty horrid things were going on around them.

Lyons: When he began shooting commercial work for magazines, how did he develop close relationships with his subjects?

Aarons: I think it was his charm, he was a special kind of guy. He was very worldly. I think the war in Europe, to certain extent was very different, than the types of places where we are in war now. Back then soldiers were stationed in long standing capital cities, that to some extent still had a certain kind of lifestyle. My father became familiar with being a sort of a well traveled, cultured guy. He had access to the best of the best. He was exposed to a lifestyle, and he realized there was a world beyond New York City and the Northeast.

Lyons: It seems he was able to cross an emotional boundary, where he really became one of the group.

Aarons: I think that may be how somebody may perceive it now, but he certainly wasn't one of the group. He was very clear that he was not of the same social class as the people he photographed and would never pass himself off as. He was a journalist, it was his job. He just really had a certain look. He acted a certain way so he didn't stick out. He wanted to be able to come back the next day, if he had to. He did the right thing: he dressed properly, he talked properly, he acted properly, he knew the boundaries. By no means was he ever pretending or passing himself off as being of the class or a lifestyle, he was seeing around him. He was always very, very humble.

Lyons: How did you become his photo assistant?

Aarons: I think it was just a natural evolution. If your daughter has two to three months off in the summer and is too young to get a real job, it's a good opportunity to help her. He said "Let's go together." It became the defacto. It was better than babysitting!

Lyons: What were some of the practical photography tasks he would have you do?

Aarons: I called for taxis, made sure that we got up on time and were out of the house on time, and had a ride to the place we were going. I wrote captions and took down the names of who's who, and make phone calls. I was the one who would move things around. My dad would say, "Mary, move that potted plant," "Mary, can you move the couch six inches?," "Mary, get the dog to behave," "Make sure the kid doesn't cry." I helped choose people's outfits, if he didn't like what they were wearing. I would go through their closets and help them pick a better dress. He would say, "Can you hold this light stand up higher? Get up on the ladder." I did a lot of stuff that you could call "styling."

Lyons: How did you personally process the world of beautiful people and homes your were stepping into?

Aarons: There was a context. I always knew where we were going, who they were, why we were there, what the story was about, or why they were important or cool. I was told to behave and remember I was there on business. When we went to shoot a horse auction in Rancho Santa Fe, California, he told me to make sure I sit on my hands, so I would not mistakenly buy a million dollar race horse! That's what any dad would say to a child, whether the child was 5 years old or 30. I just stayed in the background and didn't make a fuss, it wasn't about me.

Lyons: Looking back on the time you spent with him on these trips, and helping him with his work, how do you feel that enriched your life?

Lyons: Why do you think your father's work has become so iconic?

Aarons: I think the mis en place and settings just look good. The color looks good and the people look good. For the most part the pictures don't look dated. The era he shot in is popular once again. He photographed people when they were looking their best. He wasn't shooting Hollywood stars that were overly made up, nor was he shooting anybody grungy, in a grungy type of setting. Everybody just looks good, a take on life at its best. After the war he wanted to shoot beautiful people, doing beautiful things, in beautiful places.

Lyons: Why did you create the travel photography workshops?

Aarons: Exclusive Resorts, private club for luxury vacations, contacted me about a year ago and asked me if I wanted to be a part of their Destinations in Focus travel photography program. They explained to me about their company and their relationship with Leica Cameras. Leica was a big part of my dad's career, used their cameras and we even had a dog named Leica.

What Exclusive Resorts offers to their members, is very similar to the sort of lifestyle my dad photographed in terms of the kinds of places he went, and the kind of homes that he photographed. They are once in a lifetime travel experiences that the members enjoy. They are very akin to the kind of experiences that the people my dad photographed were having. There was a real synergy that was aligned with what my dad was involved with and represented. The workshops are all about photography, it's about travel, it was about being a collector and it's about what he and I did together, when we were on one of those jobs or even when he was there without me.

Lyons: You have already done a workshop in Las vegas. The California workshop will take place in October 2015 and April 2016.

Aarons: Yes, Las Vegas was fabulous. We stayed in beautiful Exclusive Resorts hotel apartments, but you don't need to be an Exclusive Resorts member or professional photographer to sign up. We had a great group of people and full access to all the Leica equipment, plus two Leica academy instructors and myself teaching the workshop. We had a model and captured pool shoots with her, went to the neon graveyard (where all Vegas neon signs go to die), and had an early morning balloon adventure to capture the incredible Vegas landscape. We gave photo assignments, reviewed work and learned how to edit.

We focused on the landscape and took pictures of each other as part of the workshop. We gave assignments, I participated and I was one of the instructors. We all came back and we had our assignments and the shots we had done as part of the workshop. We learned from the Leica academy guys how to edit. I gave presentations about how my dad would approach getting the
shots. When we were out there shooting I would say, "Ooh I think my dad would have done it this way". It was an opportunity for me to remember what I learned on the ground working with him.

Visit NOMADS Magazine to read the full length interview, to learn about Slim Aarons travel lifestyle, photo production and his love of collecting. NOMADS Magazine is the creative travel guide for the global lifestyle. www.nomadsmagazine.com.

Lauri Lyonshttp://www.laurilyons.com is the Founder of NOMADS Magazine, photographer and author.