Facebook, the social network that needs, loves and wrings many billions of dollars out of our photos, has jealously watched Snapchat attract a greater share of our pictures, over 700 million of which we share daily on the app. To stop the hemorrhaging, Facebook did what Facebook always does: It cloned its competitor. Only it's left out one crucial feature.

Like Snapchat, Facebook's new Slingshot app lets people share photos or videos that disappear shortly after they're consumed. Snapchat lets you have up to ten seconds with a single picture; a "sling" lasts until you've swiped it away. Like Snapchat, Slingshot aims to capture the messy moments. "Photos and videos that don’t stick around forever allow for sharing that’s more expressive, raw and spontaneous," the self-described "Slingshot crew" wrote in a press release.

But unlike Snapchat, Slingshot doesn't warn its photographers if their "expressive, raw and spontaneous" image has been captured for all eternity by a friend who decides to screenshot it. (On smartphones, the native habitat of both Snapchat and Slingshot, it takes approximately half a second to capture whatever appears on the device's screen.)

Snapchat warns me that sneaky Jason has captured a picture of my picture.

Snapchat has earned a reputation for its disappearing "snaps," although "ephemeral" messaging is something of a misnomer. Anything shared through the app can be, and often is, permanently documented with a quick screenshot. But realizing that people will mess around only if their images don't stick around, Snapchat's creators have tried to discourage the practice by tattling on anyone who, horror of horrors, takes a picture of someone else's snap. At least in my circle of snapchatters, it's worked: screenshotting a Snapchat message is like reading someone else's text messages when she leaves for the bathroom. It's feasible, but freaky and in poor form. 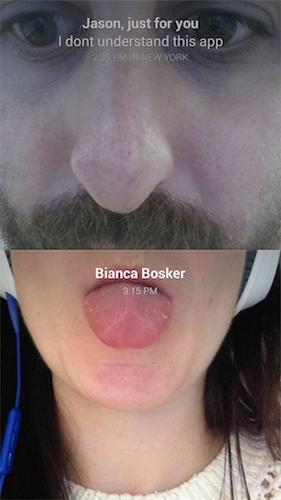 Little did I know Jason decided to screenshot our Slingshot exchange.

Slingshot, in its current version, has no such peer pressure mechanism to guilt screenshot-takers into better behavior. This omission begs the question: Will Facebook's new app ever be able to attract the ugly, impromptu and authentic photos it so hopes to steal away from Snapchat? Or will we worry with every sling that a screenshot -- and blackmail attempt -- is in our future?

It's perhaps little surprise Slingshot's creators have overlooked this small, but important, piece of social engineering that helps defend our privacy. While Snapchat's makers hit it big by discovering the value of disposable content, Facebook has always thrived based on how much it can keep.