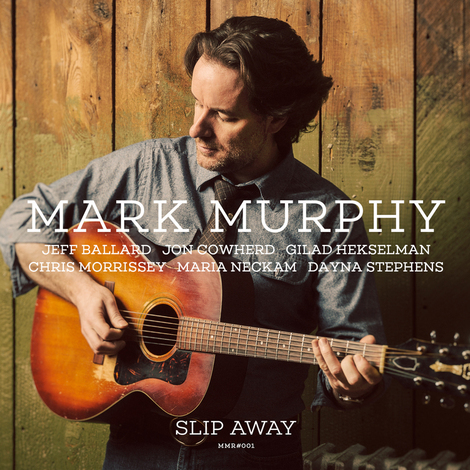 The name Mark Murphy is synonymous to me with the recently passed jazz singer who epitomized a style that was uniquely his own. Edgy, unconventional in his approach and superlatively creative. He will be missed. Surely a hard act to follow.That is probably why I was initially hesitant to give this Mark Murphy a try, but as it turns out I am glad I did.

This singer/songwriter Mark Murphy is originally from Montreal. The Canadian followed his musical muse pursuing his Bachelors of Music at University of Miami before settling in New York City in 1995. He worked in the record business for a time while continuing to gig and hone his craft around the metro NY/NJ area. Eventually he combined his love of music with a business degree he received from Lehigh University and founded his own music company and school in South Orange, New Jersey.

His latest release Slip Away, features Murphy's folk-inspired vocals with some of the crème de la creme of the jazz world, spinning magic into his own compositions and some unusual renditions of folk/pop gems.

Murphy is joined by the in-demand pianist Jon Cowherd, the versatile guitarist Gilad Hekselman, Chris Morrissey on upright and electric bass, Dayna Stephens on tenor and EWI and the inimitable Jeff Ballard on drums.

Murphy covers Randy Newman's "Dayton, Ohio-1903" and Neil Young's iconic "Tell Me Why." Both songs, while well played, lack something from the originals- Newman's unmistakable sarcasm and Young's sense of urgency. But his collaboration with fine vocalist Maria Neckam on Bob Dylan's "Boots of Spanish Leather" is compellingly original and a highlight of the album. These two have chemistry.

Murphy's own "Slip Away" is a pleasing song, with a catchy Michael Franks inspired hook that will embed into your mind and have you humming it to yourself for a while. The music pulses forward with Stephens sax and Ballard'd drums leading the way.

A fetching version of Johnny Fay's "BobCaygeon" has some especially sweet Frisellian guitar work by Hekselman and evokes memories of the Allman Brother's at their ballad best.

Murphy's voice is in some ways a descendant of other cross genre vocalists like Kenny Rankin or Jon Marks from the old Mark-Almond band. A low keyed approach that never threatens to bombast you with anything but sentiment. His voice on Paul McCartney's "Waterfalls" embraces you with sincerity. Jon Cowherd's piano musings and Jeff Ballard's powerful drum work at the coda are just superb.
The closing instrumental, Murphy's "Kiwi" is a wonderful song that skillfully employs some steel guitar finger picking, soaring electric guitar riffs by Hekselman, some eerie EWI (Electronic Wind Instrument) work by Stephens and exquisite brush work by Ballard. Jon Cowherd finishes this delightful tune off with a sensitive solo at the coda that shows why he is so in demand.

All in all, while this Mark Murphy is not my own personal favorite Mark Murphy, his work on "Slip Away" is thoroughly entertaining and makes for some quality listening.

You can sample some of the album here: http://www.markmurphy1.com/slip-away-samples/