The refugee crisis and the subsequent migrant flood into Europe has been all over international news headlines for the past few months. By now, it's no secret that the displaced families fleeing the violence in their home countries are often subjected to even more tragedies on their desperate journey for survival: whether it's crossing dangerous seas, boarding trains with no certain destination, being separated from their loved ones, or worse. We have all seen images of war-torn cities, children lying face down in the sand, and parents gripped with the agony of losing a child. Governments around the world continue in their failure to bring order to this chaos. This month, I embarked on a journey to seek out candles of hope amidst the darkness: Love Under Bullets, a project debuting in 2016 where I share love stories from conflict areas. I began my expedition in Slovenia, a small European country that has witnessed an influx of 180,000 refugees since mid-October. While some of these people intend to settle in the country, many others are passing through in hopes of reaching Northern European countries like Austria or Germany. On the day of my arrival in the capital Ljubljana, the Slovenian government had started building a razor-wire fence along its border with Croatia in order to "direct the flow of migrants" into the country, the government had said. Slovenian Prime Minister Miro Cerar stated that the fence was meant to "control the flow of people," not to prevent them from entering. He was referring to illegal crossing, while affirming that people would still be able to enter on trains through their designated open borders.

I decided that the only way to learn the truth was to go to the border and see for myself. But even when I got there, the purpose of their operations was still unclear. Before arriving to the town of Dobova on the Slovenian-Croatian border, I was able to speak with many of the locals. The majority of them appeared to have a prejudice against refugees, fearing that the influx of migrants would negatively affect their country's demographics and security. In fact, while asking for directions to the refugee camps, one man refused to acknowledge their existence. "None here. There are no refugees here," he said to me. My Slovenian videographer began joking with me, implying that because I look Arab some of the locals may think that I was a refugee myself. He insisted that I keep my Canadian passport visible in my hand, and he reminded me to lower the volume on the Arabic music playing in the car whenever we were near police or immigration officers. As if to support the adage, "A joke is truth wrapped in a smile," I was getting the distinct feeling that these locals perceived refugees as dangerous aliens invading their country. We finally reached the border where the fence was being built. To me, building a fence or wall is a universally unwelcoming gesture; fences are built to keep people out. I did, however, speak with a resident of Rigonce (where the fence is built) who defended his country's actions. "No, we just don't want the ones crossing on foot illegally," he said. "They are welcome to come on the trains." While driving in the town, we encountered a construction site that had extensive military and police supervision. I asked one of the laborers what was going on: "We are building a refugee center that will be hosting 20,000 refugees this Saturday [November 14, 2015]." While building a "refugee center" can be rightfully seen a gesture of welcome, it also sends a troubling signal that countries are not learning from past mistakes. It's been well-documented that the displaced who settle in refugee camps are likely to find that they have gone from one tragic situation to another, as overcrowded camps and sub-par living conditions can often be as deadly as the violence they had fled. As I sat near the construction site, a train passed by. It was crammed full of refugees, most of them waving their hands enthusiastically in the air. A young man shouted, "Where are we? Slovenia? Croatia?" The state of mind that the question revealed really lingered with me--just trying to imagine myself in his situation, not even knowing where on this planet you are.

We continued to drive in the same direction as the train to reach the station. There, tents were set up where volunteers from all over the world gathered. It warmed my heart that all of these people had traveled from their respective countries to help those passing through. A police wire surrounded the tents, but Mohammad, a Syrian married to a European, allowed us to cross the line so that we could enter the tents. There, he and his wife (the first subjects of my Love Under Bullets project) warmly welcomed us into the tent where food, baby milk, diapers, and medical supplies were being prepared in packages. "We get assistance from different organizations, and we spend our time here packaging and waiting for the trains to come in order to supply those in need," Mohammad told me.

Meanwhile Zohour, a volunteer doctor from Saudi Arabia, was preparing for the trains to arrive. I explained to Mohammad my confusion about a razor-wire fence being built while trains were still coming in. "They are building the wire just to prevent illegal crossing, but trains can come," he explains. "As long as they are headed elsewhere, mostly to Austria and Germany. [The refugees] are not allowed to leave the trains, they either [continue on] or move to refugee camps." Mohammad, like many of us, seemed frustrated by the situation. "Governments, and especially [Arab governments] are not giving us any assistance here. We are relying on organizations. We are not sure what is going on. A train comes, and another leaves. Why is Turkey letting them leave from the first place? I don't know, I really don't know." He then spoke highly of the Slovenian army and police, applauding their kindness both to them and to the many refugees who need assistance upon arrival. "They help register them, right before the train departs for the next stop . . . wherever that is." 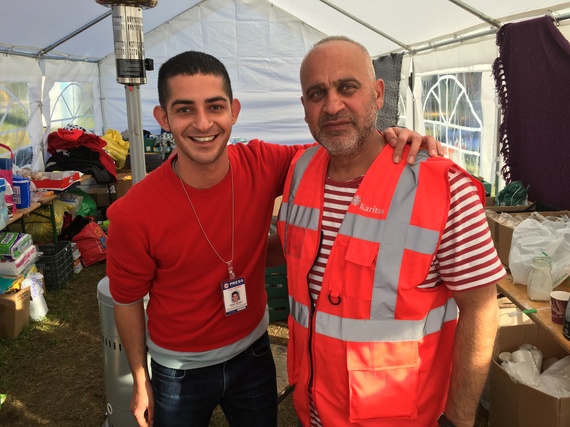 Then the train arrived, and it was surrounded by police and military officers with masks obscuring their faces. People are prohibited from leaving, except for those who require medical assistance. We saw a woman and her child being escorted to a medical van briefly before being returned to the train. Mohammad looked at the train, and with a sigh, he explained to me, "These trains are moving tragedies. I have seen people who lost their children because they were put in different cars. Parents screaming from the windows of the trains asking about their children," he said. "It is a bigger tragedy than what you can see with your eyes, or even write about later."

The train departed, and we all stood there contemplating the ambiguity of the situation unfolding before us. Refugees welcome, or refugees not welcome? It's a question I have yet to answer amidst this chaos. As Mohammad suggested, why are European countries not coordinating with Turkey in a better way? Why is the situation In the meantime, the response of governments to the rising statistic of the displaced seems like some perverse game of musical chairs where the objective is to keep the refugees moving so they are not left in your country when the music stops.