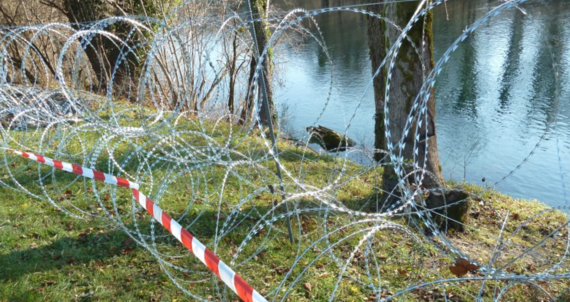 Two months ago the Slovenian government decided to fence Slovenia off from Croatia using many miles of barbed wire. It was done, supposedly, to protect the sovereignty of the Slovenian territory from the mass inflows of refugees from Croatia.

Not only did the border fence look ugly, but what is even more important -- the perceived threat of the crowds of refugees from Syria, Iraq, Afghanistan and other countries, rushing without control into the beautiful meadows of Slovenia no longer exist. All refugees entering Croatia today are traveling further to Slovenia by trains, thanks to the coordinated efforts of the Croatian and Slovenian governments.

A good friend of mine and his family live in Slovenia. They own a piece of land next to the refreshing Kupa River that forms the natural border between Slovenia and Croatia. In the summer months, his family would take a swim in the river accessing it directly from their property; a blessing enjoyed by many families who live next to the Kupa on both sides.

Last summer was a hot one, and my own family entered several times the refreshing waters of the Kupa River from the Croatian side. We also enjoyed driving on the local road next to the river, seeing people sunbathing and relaxing on both banks of the river. This was a very much idyllic picture of how two countries, both members of the European Union, unselfishly shared their mutual border.

Now back to the story of my friend who lives on the Slovenian side of the Kupa River.

One month ago the Slovenian army appeared at his property next to the river with plenty of equipment and lots of barbed wire. They worked hard stretching the razor fence across their backyard. The ugly fence meant to keep out the refugees was erected several meters away from the river, inside their property, thus making significant parts of their land and the river inaccessible to them. Moreover, although the fenced off part of their property is still in Slovenian territory, a single action by the Slovenian government made crossing the razor wire potentially a criminal act.

The same happened to their neighbors, some of whom actually live at the very border with Croatia. Barbed wire now decorates their backyards.

"Surely the Slovenian Government spoke with you before they took the action? Surely someone apologized at least?" I asked my friend. His answer was more than clear: "No one contacted us. No one asked or explained anything to us. Nor did anyone apologize for anything. They just came to our property as if it belonged to the government, police or the military and did whatever they intended to do. You can only imagine what this means to some of our neighbors who live off tourism. Their family businesses are renting canoes and camping facilities to tourists. Their livelihood depends on being able to access the river directly from their properties. It is not the refugees that the Slovenian Government has harmed, but its own people."

At the beginning of a new year, one wonders if those ugly metal fences with sharp razors, as if they are meant to secure a high risk prison or a concentration camp, that spread along the Slovenian - Croatian border are only a temporary measure, or a sign that the European Union honeymoon may be over?

Several European countries have already fenced themselves off against their neighbors. Hungary offered a brazen example when in September it sealed its border with Serbia and then a month later with Croatia. Slovenia, Macedonia and Greece were quick to follow. Austria announced it would raise a barrier along some of its border with Slovenia. Slovakia promised to fence its border with Hungary, and Romania is talking about fencing off its border with Bulgaria should the refugee corridor move to Romania.

Even before many of us knew anything about raising of border fences across Europe, Bulgaria had already erected a long border fence with Turkey. Since most of the European countries that are fencing themselves off from each other, or are seriously contemplating doing so, are EU countries (except Macedonia), one may conclude that in 2016 EU unity may be rattled even further, should the trend continue.

Moreover, although the fences placed by the Slovenian Army at the border with Croatia might look like a trivial inconvenience, with no harm for EU prestige, those fences, like the rest of them across Europe, could easily be interpreted as an ominous sign of the growing lack of leadership and authority exercised by the EU's governing institutions.

The EU likes to micromanage its countries in all areas of business, economy and trade. In some cases it would literally tell their member states what crops to grow, or what industry not to pursue. However, for some reason it has failed to come even close to any serious management of the most daring crisis that has visited its lands since the end of WWII. Although it has had enough time to put in place strategies and plans that would assist all EU countries in how to fairly share the burden of the refugee inflow, EU leadership has demonstrated sloppiness that has left each of the EU countries to their own devices as to how to treat the refugee question.

Is it then surprising at all that some EU member countries are openly hostile to the reception of any refugees into their countries, while others continue to play the number games as if they are completely oblivious about the urgency of the matter? While still others are pretending that the whole refugee crisis has nothing to do with them, and others are allowing a free ride to its right wing, pro-fascist groups to dictate the level and character of welcome, or lack of it to the Syrian, Iraqi, Afghan and other refugees in their countries?

It is within the context of such EU disorderliness, amidst the biggest humanitarian crisis in Europe in seventy years, that the barbed fence on the property of my Slovenian friend, next to the Kupa River at the border with Croatia has become a statement and symbol of the EU's fragile strength, unity and authority.

Even the Bible asks: "If the kingdom is divided against itself, how shall that kingdom stand?" Mark 3:24.