Slovenia is a nation of beekeepers, and the country has launched a campaign to have the United Nations declare May 20 as "World Bee Day." Slovenia's beekeeping culture was the focus of my travels there, and I discovered that apiculture is a blend of art, science and philosophy.

On a bright spring morning, I set off from the idyllic lakeside resort town of Bled to meet one of Slovenia's 10,000 beekeepers and see for myself why the country has such widespread affection and respect for the Carniolan honeybee.

Travelling on a winding rural road near the Austrian border, I was enchanted with the picturesque countryside, heavily blanketed with swathes of beech, oak, spruce and pine. Slovenia is Europe's third most-forested country, with 60% of its land covered in trees. I was soon to learn this all made for happy bees. 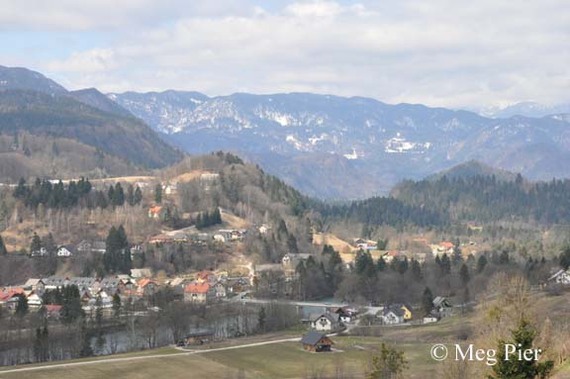 I crested a hill and spotted a colorful Hobbit-sized hut perched on a field. A young man emerged, giving me a friendly wave. I'd found my destination and date with the Honey King of Selo village, Blaz Ambrozic.

I had come to this bucolic hamlet to visit Blaž's apiary, a freestanding house of beehives. The apiary is located on a farm that has been in Blaz's family since the 18th century and is named Kralov, which means "by the king." 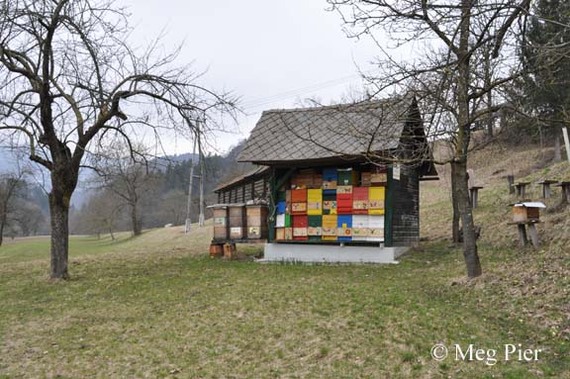 More than a thousand years ago, when prince-bishops of Brixen ruled the region, the village founder was the local king. He determined where each resident could build their home. Blaz told me the name Kralov is ancient and has long-represented quality goods; his father produced homemade Kralov brandy, and now Blaz has branded his own product: "Kralov Med" or "Honey King."

Blaž's prize possession is a gigantic Winnie-the-Pooh-style hive that he transplanted from a tree trunk. He demonstrated how you can hold your hand within inches of the buzzing hive without getting stung, thanks to the peaceful nature of the indigenous Carniolan bees. Inside the hut, I safely watched through a big window as Blaž pulled from the hive the honeycomb frames alive with bees. I sampled different types of honey, and Blaz showed me his perennial garden, pointing out when various plants blossom, providing much-needed pollen.

"My wife Danijela and I opened the apiary in 2011, and since then we have had more than 8,000 visitors, with more coming every year," he said. "About 90 percent of our visitors are tourists. Now we both have to work so we are able to do all the tours."

"Our children's first experience with the bees was when they were each three months old," Danijela explained. "Because I help Blaz in the apiary, they were always there with us, watching and playing. At first we were a little scared because we didn't know how they would respond if they got stung. When it happened, they cried a little and quickly got over it." 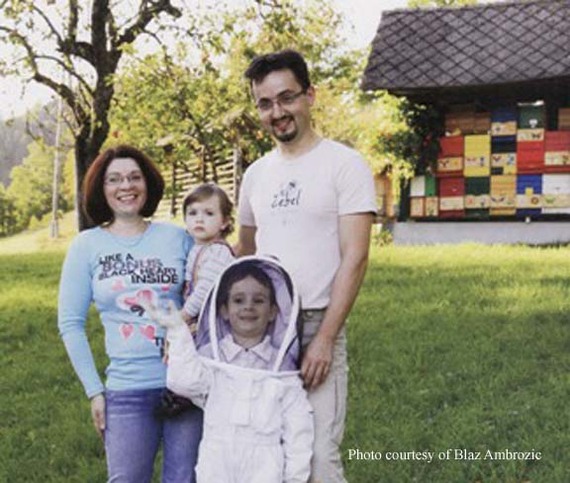 Not surprisingly, Blaz is concerned about the global decline in the bee population. Since the late 1990s, there has been a massive and mysterious disappearance across the planet of honeybees colonies, a phenomenon scientists have labeled as "colony collapse disorder."

"Most people do not know how important the bees are for our food, "Blaz said. "If man is doing something that affects nature adversely, like the use of pesticides, the dead bees are the first sign that we are doing something wrong. If we don't have bees, we will have a lot of problems, beginning with hunger."

In fact, according to the Natural Resources Defense Council, cross-pollination helps at least 30 percent of the world's crops and 90 percent of our wild plants to thrive. Without bees to spread seeds, many plants--including food crops--would die off.

"The bees have been in existence since the times of the dinosaurs and have survived the Ice Age," he continued. "Now, in North and South America the bee population is declining more than in Slovenia, but we also have problems."

Blaz belongs to a local Bled beekeeping club that is part of the Slovenian Beekeepers Association (SBA), the organization that is spearheading the campaign to have the United Nations declare May 20 as World Bee Day.

The date was chosen in tribute to Anton Jansa, who was born on that day in 1734. Jansa is considered a pioneer of modern apiculture and a great expert in the field. He was educated as a painter, but was employed as a teacher of apiculture at the Habsburg court in Vienna.

Among Jansa's many contributions to apiculture is changing the size and shape of hives to a form where they can be stacked together like blocks. His approach can still be seen at his apiary in Breznica, about 10 minutes from Blaz's; Jansa's site has been preserved by Slovenian beekeepers and continues to be a place of pilgrimage for those interested in apiculture. 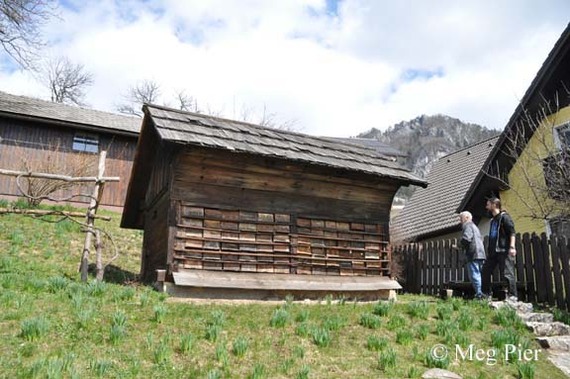 Kranjichi is the Slovenian word for the wooden boxes that house bees. The tradition of painting the front panels of the kranjichi is uniquely Slovenian folk art.

A few days earlier, I had the chance to get an up-close-and-personal look at an extensive gallery of kranjichi, lovingly collected and cared for beekeepers Vida and Joze Koželj. The Koželjs created a museum dedicated to the painted panels in their home in the town of Smarje Sap, not far from Slovenia's capital of Ljubljana. Vida's family has worked with bees for over 200 years. 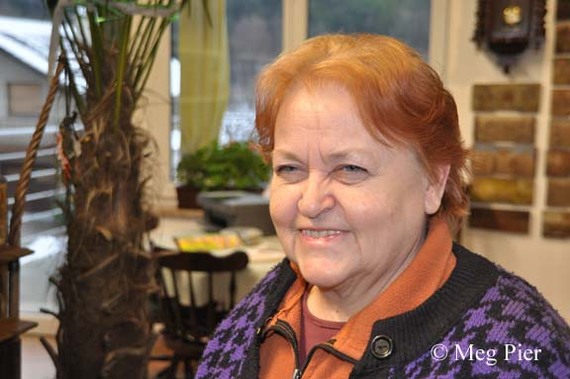 As I buzzed from one painted panel to the next, Vida offered enthusiastic commentary. I learned that despite the long history of bee keeping in Vida's family, the activity was never their primary business. Bee pollination and breeding were a sideline that supplemented their meager existence as farmers. 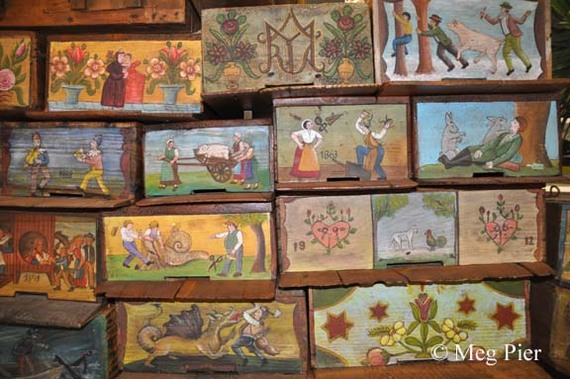 I asked what had inspired the Koželjs to create the museum and Vida said the beekeeping tradition is in their hearts. She explained that her husband is a hunter, and the vocation often took them across Slovenia. In their travels, they saw a lot of beekeeping tools that were in a forgotten corner of a barn or under a hayrack and the painted panels they came across were in worse and worse condition. They realized that the folk art was slowly vanishing.

That recognition was painful for them and they embarked on a mission to preserve this piece of Slovenia's history.Their friends knew about their passion and told them about items they saw, often passing along the owner's telephone number, and Vida or Joze would call the owner and bargain about the price. Some objects were also bought on Ljubljana's Antiquity Market, which is held every Sunday all year around.

Vida gave me a primer on the history of the painted panels.

"In the beginning, the panels were painted by unknown itinerant painters," she said. "Since these travelling artists were very poor, they could not pay for their accommodations and so painted farmers' panels in exchange for bed and board. Later on, some painters became well-known--the most popular family was named Šubic. There are also a lot of panels painted by laymen--those panels are recognizable because the figures are funny: the head is too big or the arms too long."

Many of the panels in the Koželjs' collection are quite old-this one depicting Jesus dates to 1754. "Slovenian farmers believed in God and were always very religious," Vida said. "God played the central role in their lives and Jesus, as his son, is the light of our lives. He shows us what is possible and what the main point of our lives here is--the path to our Father." 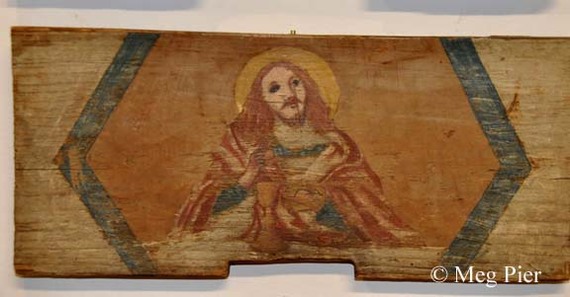 When I asked which panel was Vida's personal favorite, she showed me one depicting a man running away from a tree. She called the panel "Apitherapy" and said its story could be read from right to left.

"It was well-known that bee stings were an effective treatment for rheumatism," Vida said. "This young man claimed to have problems with rheumatism and was not able to work so he was sent to the tree with bees. While he was under the tree he tripped and fell. The bees were disturbed, woke up and started to attack him. Full of bee stings, he never thought about rheumatism again."

Vida shared the story behind a panel dated 1888 featuring a man approaching a fiddler with food and drink. She explained to me that custom requires every entertainer must be rewarded. 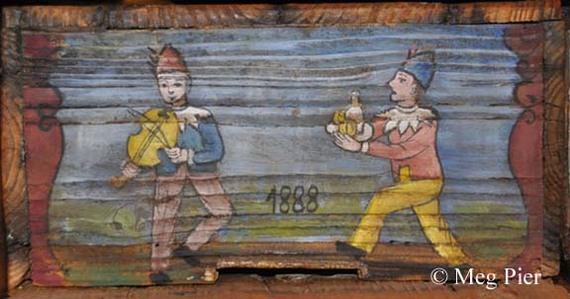 Based on my stay in Slovenia, hospitality rivals beekeeping as the country's chief custom. But I suppose the two go hand-in-hand in a culture devoted to an enduring symbol of cooperation. The world would do well to join Slovenia in embracing the spirit of the Carniolan honeybee.