With fall well under way and winter knocking at the door, slow cooker season is officially here, and we couldn't be happier. Slow cookers are one of our favorite kitchen gadgets; they're like magical machines that churn out meals we never thought we could make on our own. From moist and tender meat dishes to impossibly flavorful vegetable stews, meals from the slow cooker are pretty much guaranteed to rock. Not only are they hard to screw up, but you can leave them for literally hours on end. We could sing the slow cooker's praises for as many hours as it takes to cook these amazing short ribs, and we just found out one more reason to keep singing.

It turns out you can use your slow cooker as a steamer. That's right, friends. Your trusty slow cooking magic machine has a whole new use, and can actually cook food quite quickly. Chef Grant Achatz, champion of molecular gastronomy, also happens to be an unlikely champion of the slow cooker, and he told Food & Wine magazine that he uses it to steam food. Achatz said he steams dumplings, buns and even fish in his slow cooker, using it as he would a bamboo steamer.

He explained two steaming methods. In the first approach, he fills the slow cooker's insert with a shallow layer of liquid -- either water or tea -- and then he uses lemongrass or ginger to build a rack that sticks out above the water. Whatever he places on top will absorb the flavor of the aromatics below. Achatz's other method omits the liquid altogether and just uses a bed of herbs and aromatics. He'll "simply put down a bed of chopped herbs and lay a piece of fish on it. The herbs release their moisture to slowly steam the fish.That’s a very useful technique for easy, healthy cooking," he explained to Food & Wine. 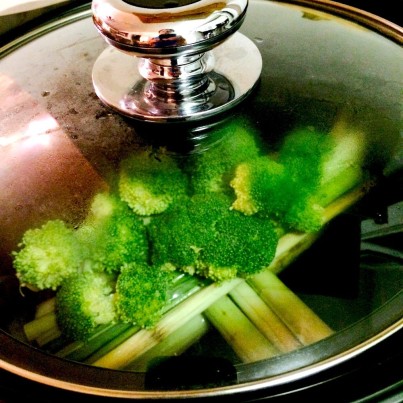 We tried this genius trick at home with dumplings and broccoli over a homemade lemongrass rack, and a piece of cod over a bed of herbs, ginger and chopped lemongrass. The slow cooker we used was four quarts in volume and we placed the heat on high. For the broccoli and dumplings, we let the water get really hot first, and then only had to steam for 12-15 minutes. For the fish, the interior of the insert was also hot before we set down the fish, and it took only around 12 minutes to cook as well. The flavor was subtle but undeniable, and the finished product about as healthy as it gets. We want to experiment with different and more aromatics, as well as different liquid bases. (We used water, but are intrigued by Achatz's idea to use tea.)

For those with limited counter and/or stove space, the slow cooker-as-steamer method is a great trick. It also makes it really easy to impart all kinds of interesting flavors in perhaps the most healthy cooking method of all. Only Achatz, one of the most progressive chefs in the country, could introduce to us -- unapologetic fans of the slow cooker -- an utterly new way to use one of our favorite kitchen devices. Winter is about to get a lot more exciting -- and healthy.