By guest blogger Annie Spiegelman (a.k.a the Dirt Diva)

Last month, for my Dirt Diva garden column, I reviewed two fascinating books: Maria Rodale's Organic Manifesto (Rodale, 2010) and Slow Death by Rubber Duck (Counterpoint Press, 2010) by Rick Smith and Bruce Lourie. After reading these two sobering works, which, respectively, investigate chemical agriculture versus organic farming and the toxic household chemicals lurking in our home environment, I was stunned and irate. But also pleasantly armed and dangerous with facts! This is the kind of knowledge you can't keep to yourself, You have a responsibility to share, so I highly recommend you read both books. We owe it to our kids to be ecologically informed.

That way they can't say their parents were "so lame...." (And could barely text.)

It would be a conflict of interest to brag about Maria's book on her own blog, so I won't (you can read the stellar review at www.Huffingtonpost.com), but I will tell you about the book that examines rubber ducks, dancing cats, and mutagenic pajamas!

In Slow Death by Rubber Duck: The Secret Danger of Everyday Things, wild and crazy Canadian science-policy geeks Smith and Lourie write about the slightly horrific, and sometimes hilarious, experiment they conducted on themselves. For one week, they hung out in a rented apartment inhaling and ingesting a variety of toxic chemicals that are in everyday household products. Some examples: personal-care products containing phthalates and triclosan, baby bottles leaching bisphenol A (BPA), high levels of mercury in tuna, and the off-gassing from new carpets. The authors carefully monitored themselves by taking urine and blood tests throughout the experiment. These were regularly sent to a highly respected forensic laboratory. "While we were voluntarily and deliberately exposing ourselves to these substances, thousands of people were unknowingly and involuntarily exposing themselves to the same chemicals," says Lourie. 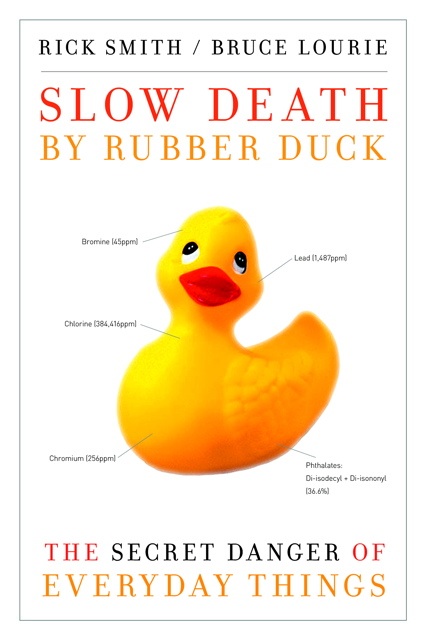 By doing these things that people do every day, for one week, Smith increased his urine levels of phthalate (MEP) 22 times, his levels of triclosan 2,900 times, and his level of BPA 7.5 times. He ate only canned products, and drank out of polycarbonate bottles for one full day during his experiment. As an adult male, his level of PBA increased more than sevenfold. Babies are essentially doing that all day, every day. "What in God's name were they thinking when they started making household plastics out of a chemical that has been known for over 70 years to screw up the human body's hormone system?" writes Smith.

A large and growing body of scientific research links exposure to toxic chemicals to many ailments, including several forms of cancer, reproductive problems, and birth defects, respiratory illnesses like asthma, and neurodevelopmental disorders such as attention deficit hyperactivity disorder (ADHD).

The authors conclude that we can't completely succeed at avoiding these things. The toxins are too widespread. You may eat organic at home, but the chairs, bus seats, and carpets are coated with toxic stain-resistant chemicals, and the air fresheners in the cab, bathroom, or office are spewing out phthalates. We need to first get informed, so that we can make wise, educated choices as consumers. And second, we need bona fide government regulation and oversight of toxic chemicals.

That's where you and I come in!

This would make a fantastic Mother's Day gift, since, supposedly, 'Mother knows best.' It would behoove all moms to know this: "There are 82,000 chemicals in use in the United States, with 700 new ones added each year," writes Lourie. "Of those roughly 82,000, only 650 are monitored through TRI (EPA's Toxic Release Inventory), only 200 have ever been tested for toxicity, and only five have been banned under the Toxic Substances Control Act."

No they di'nt. Oh yes, they so totally did!

Not even asbestos is banned, a known carcinogen that's killed nearly 45,000 Americans over the past 30 years.

Moms, especially new moms with babies, need to read this book. We need to gather the facts, educate, network, and spread the word to support companies who don't hide scientific research on the hidden toxicity of their products, especially their baby products, baby bottles, rubber ducks, baby pajamas.

As the League of Maternal Justice bloggers write on their home page: "To use the power of the mom Internet community to expose the injustices perpetrated against mothers everywhere, and to exact vengeance through excessive finger-wagging and online shaming."

For more from Maria Rodale, go to www.mariasfarmcountrykitchen.com.