Eat. More. Fish. Easy for me to say, right? I live on Martha's Vineyard, an island, surrounded by the Atlantic Ocean. Fish we have. (McDonald's and Wal-Marts, thankfully we do not.) Here on the Rock -- the affectionate name we give our 90-square-mile of glacial moraine -- most year-rounders own a fishing pole or a clam rake, or are comfortable using their own two hands to pluck glistening mussels from their rocky, seaweedy palaces at mid-tide.

And you can pretty much bet that when the Obamas arrive next week, they'll be feasting on local fish or shellfish -- whether it's a lobster roll from Menemsha Fish Market or a plate of briny Sweet Neck oysters from Katama Bay -- because that's what summer folks on Martha's Vineyard do. Likely they'll fork into a freshly caught fillet of bluefish or striped bass, too.

But they won't be eating flounder. Because Wednesday I ate the last legal one caught in Vineyard waters.

I didn't do it on purpose. I was merely trying to be a good journalist and find out what Slow Fish is all about. Slow Fish is an offshoot of Slow Food, the world-wide movement devoted to encouraging local, sustainable, pleasurable eating. There are about 100 Slow Food members on Martha's Vineyard, and they've now also started a Slow Fish group, dedicated to "the pleasures of eating seafood in a sustainable manner."

I ambled on up to the Chilmark library Wednesday night to hear Warren Doty, a representative of Slow Fish and a director of the Martha's Vineyard /Dukes County Fishermen's Association, talk about how a successful sustainable fishery works. He chose flounder -- specifically summer flounder, better known as fluke -- as his example. (Winter flounder, confusingly, is not a healthy population.) The spawning stock biomass of fluke --t hat's the number of breeding fish in the water -- has recovered so steadily over the last ten years, due entirely to catch quotas and limits on catch size, that it's on target to reach the goal of 132 million pounds set by the fishery management for the year 2013.

I was curious about how all this works, because I make my living as a Food Writer. That's a fancy name for a Recipe Developer. Problem is, I used to feel pretty good providing folks with tasty recipes that work well. But these days, I feel like that's not enough. It's only fair that I also help people negotiate the treacherous waters of the grocery store. Because sometimes finding a good, sustainable, humanely-raised protein for dinner is more anxiety-producing than a trip to the dentist.

I know fish has plenty of issues. But with yet another bad beef recall this month (antiobiotic-resistant salmonella in your burger, anyone?), it seems like finding healthy, sustainable fish could be more within our reach than humanely-raised, pastured meat.

So I listened to Mr. Doty. And I ate. As it happens, Mr. Doty brought along a fluke from one of the last boats to come in the day before. And according to The Massachusetts Division of Marine Fisheries , the Commonwealth of Massachusetts' 2009 summer flounder (fluke) fishery quota (702,614-lbs.) was reached on Tuesday, August 11th. Therefore, according to the website, "after 8PM on Tuesday, August 11th, commercial fishermen are prohibited from landing or possessing fluke through December 31, 2009." So the delicious fluke salad with bell pepper and cilantro that Mr. Doty made and served to us was the last of the season.

Fortunately, we've only caught 182,602 lbs of the allowable 653,575 pounds of bluefish for the year and only 653,201 pounds of the allowable 1, 107,118 pounds of striped bass for the year. So the Obamas are in luck. We hope they'll choose one of these fish over something like the poor bedeviled codfish, which is still being overfished on George's bank. 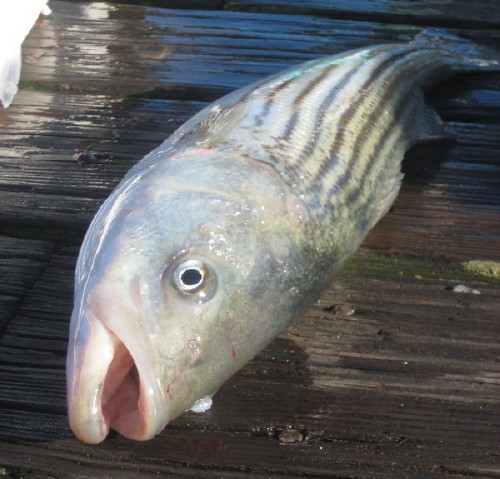 But what do the rest of us do on a given weeknight? I had to raise my hand at the end of Mr. Doty's presentation and ask. When we go into the fish market, how do we know what the best choice is? The answer is embarrassingly simple. We ask the fishmonger. And here's why.

Yes, we want to eat fish from sustainable fisheries, but, according to the Slow Fish folks, choosing local fish is also important. If we buy fish from local fishermen who own their own boats (up in Menemsha, where most of the Vineyard's fisherman dock, the limit on boat length is 72 feet), we're not just helping the local economy. These guys, unlike their giant corporate (or international) counterparts, are not overfishing or cleaning out huge stocks of fish. Just like buying local produce is often a better bet than organic produce shipped from half-way around the world, local fish makes sense. And your local fishmonger will be happy to tell you what that fish is.

But what if you don't live near a source of fresh fish? Your next best bet is to download a copy of one of the Monterey Bay Aquarium's custom Seafood Watch guides. There's one for every area of the country, and it will tell you which fish (farmed included) are your best choices. Even if you only add one night of fish to your dinner repertoire each week, you're cutting down on your carbon footprint, adding all those cancer and heart-attack preventing Omega-3 fatty acids to your diet (lower health insurance rates!), and casting a vote against bad beef. You can do that wherever you live.

Author, 'Fresh From the Farm: A Year of Recipes and Stories"