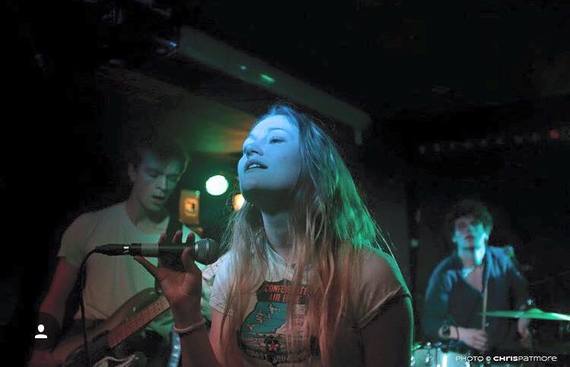 Brace yourselves, America. Norway's Haley Shea, Lasse Lokøy, Halvard Skeie Wiencke and Tor-Arne Vikingstad are coming. The foursome go by the name Sløtface and just dropped a song that you will not be able to get out of your heads for the remainder of the summer. The band is taking the country by storm with irresistible pop punk hooks and a rumbling post-punk flavored bass line. I recently had the chance to speak with the band about girl power and their latest catchy single, "Take Me Dancing."

Thanks for the interview Sløtface! How did you guys meet and find your unique sound?

Haley: We had all been in various bands from very young ages in our hometown of Stavanger, Norway. Some metal, some prog, some pop, you name it, but we really wanted to be in a band where everyone was willing to put in lots of hard work. When Tor-Arne (guitar) and I were in our final year of high-school, and Lasse (bass) and Halvard (drums) were in their first, we put together Sløtface with the people we most enjoyed playing with in other bands. We recorded a few demos and it seemed to work out, so we kept that constellation. Our sound just comes from all of our different musical tastes combined into writing music. We write all of our music together and then I write the lyrics, so it just ends up sounding like a mix of our musical favorites.

It's awesome when friends are able to come together and create something beautiful. "Take Me Dancing" is proof of that. Tell me, what went into writing and creating the song?

Haley: "Take Me Dancing" was one of the first songs we ever started playing together as a band about 3 years ago. It has gone through lots of transformations since then, but the bones of it were written by me and Tor-Arne during an exceptionally angsty teenage phase of our early friendship when we would drive around and listen to mix CDs and pretend we were in a high-school movie. The lyrics were written as a response to the male voice in Big Star's song "Thirteen", I wanted to write an answer that didn't make what has always been a female character in my head, seem as chaste and "old-school"-feminine.

I love it Haley. You guys talk about breaking into public pools in the song so I have to ask...What was the last public pool that you broke into?

Lasse: I don't think any of us have actually broken into a pool. But it seems like a lot of fun in movies so we wish we had. I once tried to sneak into a public pool without paying though. The guy behind the counter wasn't there so I just walked right in. Unfortunately there were only a couple of people there at the moment so I got caught. Which was pretty embarrassing.

I don't blame you for trying Lasse. Sometimes you just need to cool down. "Take Me Dancing" is a great song for the summer. What are a couple of your favorite places to dance?

Halvard: We really like dancing at festivals, particularly outdoor ones in the grass with tons of other sweaty people. Hanging around at a club after we've played a show is also a good place to dance. We're pretty big on dancing in general even though we might not be the coolest dancers.

Dance as if nobody else is watching! Good attitude Halvard. What emotions were you guys feeling when you finished your latest album?

Tor-Arne: Anguish. Relief. Joy. What other dramatic words can we come up with? I'm mostly joking. After finishing our album we're mostly excited to show people what we've done, and proud of all of the hard work we put into it. But it's been quite an emotional journey as it's our debut record and the first time we have had the chance to make something that takes up such a chunk of time. 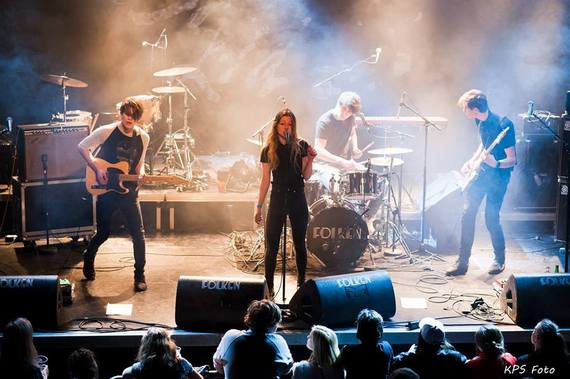 Nothing wrong with going through a range of feelings Tor-Arne. I know you guys were known as Slutface before being Sløtface. While speaking of going on an emotional journey, what are your thoughts on internet censorship? How has it made an impact on how you guys operate as a band?

Haley: We are pretty conflicted about internet censorship. On one hand it's a shame that we were forced to change our name due to censorship that we view as a bit overprotective, like censoring advertisements for our bands shows, and female nipples, but not male nipples. But on the other hand we understand that it is a kind of desperate attempt to protect people, and especially kids from things they shouldn't have to be bombarded with every time they open their cell phone. We're sure we'll eventually find some sort of balance between over protective censorship and common sense.

Good looking out Haley. On a totally unrelated note, what was with the Gorilla in your "Bad Party" music video?

Tor-Arne: The Director of the music video, Stian Kristiansen, had this idea for a video where we would have a hidden camera out filming our hometown nightlife. One of us was supposed to be dressed up as a gorilla jumping around messing with people and then we would get their reactions on film. It was meant to make fun of the way anyone can turn into an idiot (read: Gorilla) when they drink. During the process we decided we wanted it have a more high school-look and ended up with this. We kind of tricked Stian into paying tribute to our favorite norwegian movie "Mannen Som Elsket Yngve", which was the first feature film he directed.

Got 'em! You have another song about not shaving your heads. As a person who shaves his head I am curious, who would you not shave your head for?

Halvard: Well, as the song says, we wouldn't shave our heads for anyone really. But we especially wouldn't shave our heads for anyone as a publicity stunt, even though it has been tempting. We considered it for the release of the "Shave My Head" single though, but the owners of the club where we were having the release got wind of the idea and were not fans of us shaving heads in a club, and it was raining outside.

If you guys change your minds feel free to join the my crew anytime. What do you most look forward to when being on tour?

Lasse: To get on stage, meet new people and hopefully have an "adventure." We usually end up in some weird situations on tour and when that happen we always say "What a journey" and "Music takes you places," which is as true as it is a clichè.

There is always an element of truth in any kind of clichè. What would your fans be most surprised to find out about you?

Tor-Arne: I guess we are pretty transparent. Like, if someone picked a fight with us, they would stand a pretty good chance at winning. We are also pretty bad at partying after shows. We sleep and read a lot on tour. There is really no positive things coming out of this question...

Who doesn't love sleep and a good book? The power of positivity rocks! What would you like music fans from all over the world to know about Norway?

Tor-Arne: We have a great hardcore, metal and punk scene. Also the Norwegian artist Kygo has the world record as the fastest artist to reach 1 billion streams on Spotify. For only 5 million people, we are pretty divided when it comes to music taste.

That is pretty wild. What are some punk bands that you have drawn inspiration from?

Haley: We have drawn a lot of inspirations from punk and hardcore bands playing in our hometown. They were the only bands setting up under aged and drug/alcohol-free concerts. Usually they ended in sick mosh pits with tons of sweaty underaged teenagers. Norwegian bands like Honningbarna, Kvelertak and Purified in Blood really shaped us as a live band. To watch people play rock and punk music while sweating and screaming instead of sitting at home and watching VH1 and MTV is a completely different experience, though we enjoyed that too.

Tor-Arne: When we were younger we listened a lot to the bigger punk bands like The Clash, Green Day and The Ramones, so musically we've drawn a lot of inspiration from them.

That's an awesome mix of talent. I like that you guys aren't afraid to speak up. Why is feminism important to you all?

Lasse: Because we still have a long way to go before all genders are treated equally and have the same opportunities. A few times people have questioned whether us boys in the band are as engaged in feminism as our vocalist Haley, which we think is pretty anti-feminist, seeing as feminism to us means equal rights for all genders. Everyone should be treated and accepted equally regardless of gender. And if people disagree, they're jerks.

I'm with you Lasse. I believe that a movement should be inclusive. That is the only way change can be made. While on the subject of feminism, Kesha's recent struggles have been heartbreaking to read about. What do you think of Kesha's current situation?

Haley: It's obviously a horrible situation and clearly showcases a dark side of the music business, and the business world for many women in general. Music is still a male-dominated business overall when you look at live-production, record companies, record labels, management companies and artists. This affects the way women get portrayed and treated, both as artists and employees, often in a negative way. We need more women in this business to remedy situations like the one Kesha is in, and other situations like it. I would not be surprised if there are many more cases like this, that will likely never be aired publicly.

Tor-Arne: We think that having a more balanced gender division in music would make it a better, healthier business to be in for everyone, and would give the art we're all trying to make a more balanced and representative voice. We as a band are actively working to have a team that is as balanced and fair as possible, and encourage the rest of the music industry to do the same.

You guys are awesome! Thank you for fighting the good fight. I have to let you go but before I do that, where can fans check out your latest music?

Haley: Thanks for the interview Kyle! Fans can check our sound at https://soundcloud.com/slotfaceofficial-1 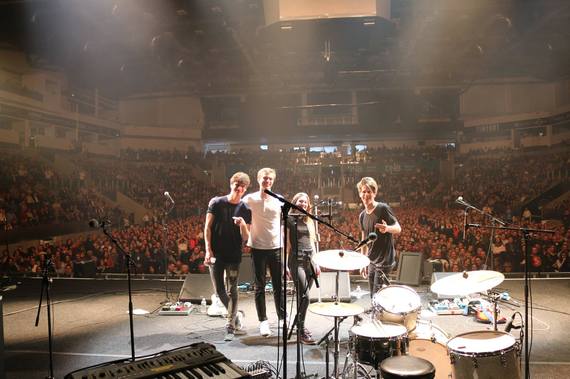