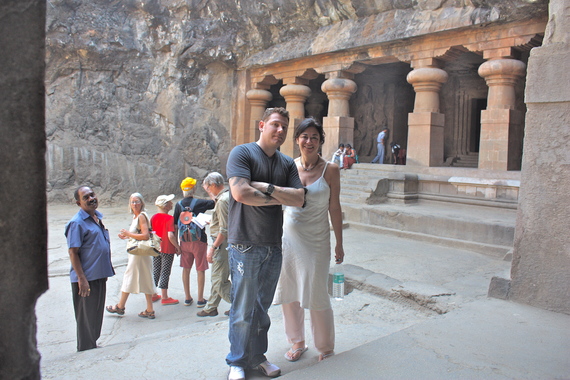 When you've be writing songs as long as I have sometimes it's nice to have a change of scenery... Get out from inside the same studio or the familiar surroundings of Santa Monica and Sherman Oaks. Travel expands the mind. So when I feel like all my songs are starting to sound the same, I know it's time to make a move. That's why, when writer/producer Mike Krompass asked me to come to India with him in 2011 to work on an album for Shiamak Davar, my interest was peaked.

I had just finished reading Eat Pray Love and imagined myself at an ashram in gauzy cotton frocks, drinking chai tea, and doing downward dog while finding my mantra. But I also had some reasonable reservations.

1-I hardly knew Mike. So would we get along?

2-We'd have to get an armful (literally) of travel inoculations. Ouch.

3- India was pretty far away. And to be honest, I wasn't thrilled with the idea of being on a plane for twenty hours unless of course, Shiamak's contingent was willing to fly us first-class. And I was pretty sure they wouldn't be. I told Mike. Mike asked the contingent. The contingent said yes. So we got our armful of inoculations and off we flew to India via Emirates. Three exquisite meals. Flat bed and down comforter.

What I didn't realize is that we would be spending our entire writing trip in Mumbai, a world away from Eat Pray Love. Not an ashram in sight. Remember the film, Slumdog Millionaire? That's where we were.

Upon arrival, Mike and I were advised not to leave our hotel without a local escort, as gangs of poverty stricken street children would trail us and beg for money; money that presumably would be handed over to a ringleader who would give them crumbs in exchange. Apparently, the children were also instructed to pick the pockets of naive tourists. Naive? Tourists? I'm an Ex-New Yorker for G-d sakes! Mike has tattoos!

"Don't even look them in the eye," we were told. "You'll be sorry. They'll be waiting outside your hotel in the morning."

On our first night, defying the warnings, Mike and I went out for a walk. How could we not? The Arabian Sea was across the street. The Gateway To India around the corner. But just as predicted, we indeed were stalked by the young children, flies buzzing around their heads. Many were carrying babies of their own. They brought their pursed fingers to and from their lips signaling hunger.

Of course we looked them in the eye. Of course we broke down. But when I reached for my wallet to find some rupee I felt a little bump and little jiggle and when I got to my room, I realized my iPhone was gone. My only twenty-four-seven connection to my daughter, nine thousand miles away, should she need me. I was beside myself. How could I be so careless? How could they be so clever? They're children! I'm an Ex-New Yorker for G-d sakes! Mike has tattoos! And they were waiting outside in the morning.

I was still bitching about the ruse when we next met with Shaimak. His response?
"An iPhone is just a thing. A replaceable inanimate object." I felt even more foolish for all my hysteria when he presented me with a replacement. He had one for Mike too. And Mike hadn't even lost his. On second thought, maybe those children needed that phone more than I did.

Over the course of our stay, in between writing the songs we came so far to write, Mike and I were provided with a driver who took us to museums and mosks, markets and ancient sites. We saw women in vibrant colored saris just blocks away from others bathing in polluted streams. School children in tidy uniforms being escorted home on the same roads where grown men were defecating in the street. We saw unattended infants in papooses hanging from poles. Maybe their thirteen year old mothers were part of those street gangs scavenging for crumbs. (And iPhones.) We saw extended families living in squalor under cardboard roofs. Talk about a change in scenery.

At the end of our trip on the way to the airport Mike and I fell silent in the back of a chauffeur driven car, absorbing all the shock and awe, so deeply aware and humbled by the first world problems we were returning to: leaky faucets, cavities, parking tickets. Ashamed that our typical daily complaint is about a song not making a record. Shame on me for asking to fly first- class.

At a stop light, another crowd of children banged on our window...this time they were smiling for the camera.

I asked Mike how we were going to explain what we had witnessed to our friends. There was no way to describe it. Plus, the whole experience was a little odd to have had with someone I hardly knew. Two months back, Mike wasn't even on my radar. But he was now.

As in any adventure, the memory of it is never quite how you imagined it would be before you left. If anyone told me what I would experience... what I would see.. .I might not have gone. But I'm glad they didn't.

Funny, I went to India to clear my head, to give my songs a different point of view. But the Universe has a way of saying "Ha" all the time. Back in the safety of my Laurel Canyon nest, I couldn't write a word for weeks. In fact, a pop song was the last thing on my mind. 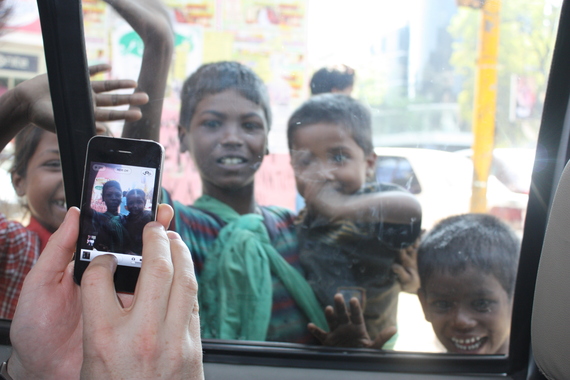 Thanks for listening. Please visit me on my Serial Songwriter Facebook Page and at ShellyPeiken.com

Songwriter, Author of Confessions of a Serial Songwriter