Last night, the exemplar of politesse that is the Anthony Weiner mayoral campaign took a turn that we should have perhaps expected, when his communications director, Barbara Morgan, blasted one-time Weiner intern-turned-scoop purveyor Olivia Nuzzi with a litany of eye-popping obscenities. Morgan made these remarks to TPM reporter Hunter Walker, after Nuzzi's insider-look at the Weiner campaign made the cover of the New York Daily News.

As often is the case when a string of newsmaking vulgarities come stumbling into our lives, newspapers covering the story were faced with the challenge of presenting the remarks to their readerships of ostensible adults. Some of the terms deployed by Morgan (such as "twat" and "cunt") were words whose usage in print have long been governed by the vagaries of internal style guides. But Morgan, momentarily confusing the person under whom she works with a person she supervised, also referred to Nuzzi as a "slutbag."

This was a new challenge, because "slutbag" is not an obscenity per se (though it is really mean).

Talking Points Memo obviously gave its story the "warts and all" treatment. In relating that story, we did the same, under the assumption that you could handle it. Gawker put "slutbag" in its headline (along with many other choice terms) and Gothamist did the same, though it opted to render "fucking" as "f--king." The word "slutbag" is the only word the New York Post didn't shy away from censoring in its headline and copy. The New York Daily News did the same in the body of its article, while referring to the incident as a "profanity-laced rant" in its headline.

At the New York Observer, where there's "nothing sacred but the truth," Politicker reporter Jill Colvin used the word "slutbag." The New York Times, where "all the news that's fit to print" gets printed, opted out of the "slutbag" game entirely, referring its readers only to a "barrage of expletives that would be unusual even in an off-the-record conversation."

Of Morgan's rant, the closest The New York Times gets to a precise quote is this:

Ms. Morgan said that Ms. Nuzzi was a fame-seeking underachiever who “sucked” at her job. Ms. Morgan threatened to sue Ms. Nuzzi for claiming that Ms. Morgan had a thin résumé.

Morgan did use the word "sucked" in conversation with Walker. Funnily enough, the Times, in reporting that Morgan referred to Nuzzi as a "fame-seeking underachiever," accurately describes what Morgan had hoped to convey. Had Morgan astutely decided to use the actual words "fame-seeking underachiever" in conversation with Walker, this story would not be nearly as newsworthy as it is. This decision to make Morgan sound more professional actually lessens the impact of the story. (The Times does include a link to Talking Points Memo so its readers can go and get the actual story, which is nice.)

Elsewhere, news organizations were even more pearl-clutchy. NBC News tells its readers that Morgan went on "an expletive-laced tirade," containing "several disparaging names for the female anatomy." They offer up "f------" at one point, but refrain from using "slutbag" entirely.

The Wall Street Journal describes "a series of harsh expletives," but only quotes Morgan as having said: "Man, see if you ever get a job in this town again." The Wall Street Journal says that this is "one of Ms. Morgan's more tame quotations," but that's giving it too much credit. The "you'll never ___________ in this town again" is so cliched that it's more euthanized than tame.

Fox News, for reasons I cannot fathom, decided that the word "slutbag" was an important part of the story but nevertheless felt it needed minor censoring. It has presented its readers with "sl**bag" as an alternative.

Lord only knows what Daily Mail readers were thinking as they read last night that Morgan used the word "s*****g" in its copy. What's that supposed to be? "Sagging?" "Salting?" "Sapling?" The Mail really sandbagged its readers. Hey, "sandbag" would work as well! 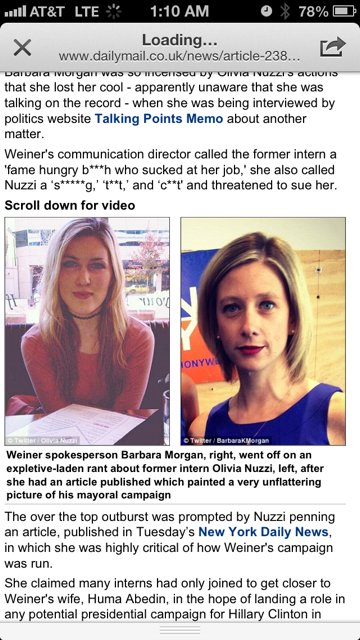 The Mail has since lessened the confusion by updating this to "s***bag," so now their readers might merely think that that Morgan called Nuzzi a "shitbag," which is ironically a more vulgar choice of expletive.

At any rate, the one unknown here is whether Morgan meant to suggest that Nuzzi was a "slut" of such magnitude that she can gather and contain objects, much like a bag, or if she was an anthropomorphic sack, in which sluts might be conveniently discovered within. This is a question that shall probably be left unanswered, if not unasked.

This story appears in Issue 61 of our weekly iPad magazine, Huffington, in the iTunes App store, available Friday, August 9.