There was an other protest Saturday in New York that didn't end with the arrest of 700 people.

Thousands of demonstrators gathered in Union Square for SlutWalk, an international grassroots movement to protest against sexual violence, victim-blaming and slut-shaming. They made signs in the morning before marching en masse and then reconvening in Union Square park for a rally.

The movement, which has held protests in Boston, Denver, San Francisco and New Dehli, India, originated earlier this year in response to a Toronto police constable who provoked outrage by saying women should avoid "dressing like sluts" in order to avoid being sexually assaulted.

Incidentally in New York last week, NYPD police officers warned women in Brooklyn not to show too much skin after a recent string of 10 sexual assaults has left Park Slope and the surrounding neighborhoods in fear.

Like their #OccupyWallStreet counterparts downtown, the SlutWalkers chanted "The people, united, can never be defeated." And many of those who marched shared deeply personal, horrifying stories of sexual assault.

It was not only women at the rally. One man wanted to remind people that men can be victims too and carried a sign that said "I was wearing PANTS the night it happened."

He wrote on his tumblr, "While women are usually the faces of rape, because it’s such a disgustingly common occurrence amongst them, there are men who deal with the issue as well. I walked to Union Square and in the march by myself, but I found myself surrounded by all different kinds of beautiful people marching in solidarity and in support of the same causes."

As the rally ended, organizers Jaime and Anoushka delivered an impassioned speech (listen below). "Even if one person, one person—I’ve been asked to quote fucking stats all day and I am sick and fucking tired of statistics. If one person experiences violence or shame or rage or sadness at the hands of another person that is all of our problems!" one of the women can be heard saying.

[Flash 9 is required to listen to audio.]

And yet as inspiring as the event was for many, New York's first SlutWalk this weekend has troubled others, specifically in the African-American community.

In An Open Letter From Black Women To The Slutwalk, members of Black Women's Blueprint described how SlutWalks excluded the experiences of women in color:

We are deeply concerned. As Black women and girls we find no space in SlutWalk, no space for participation and to unequivocally denounce rape and sexual assault as we have experienced it...As Black women, we do not have the privilege or the space to call ourselves “slut” without validating the already historically entrenched ideology and recurring messages about what and who the Black woman is. We don’t have the privilege to play on destructive representations burned in our collective minds, on our bodies and souls for generations. Although we understand the valid impetus behind the use of the word “slut” as language to frame and brand an anti-rape movement, we are gravely concerned. 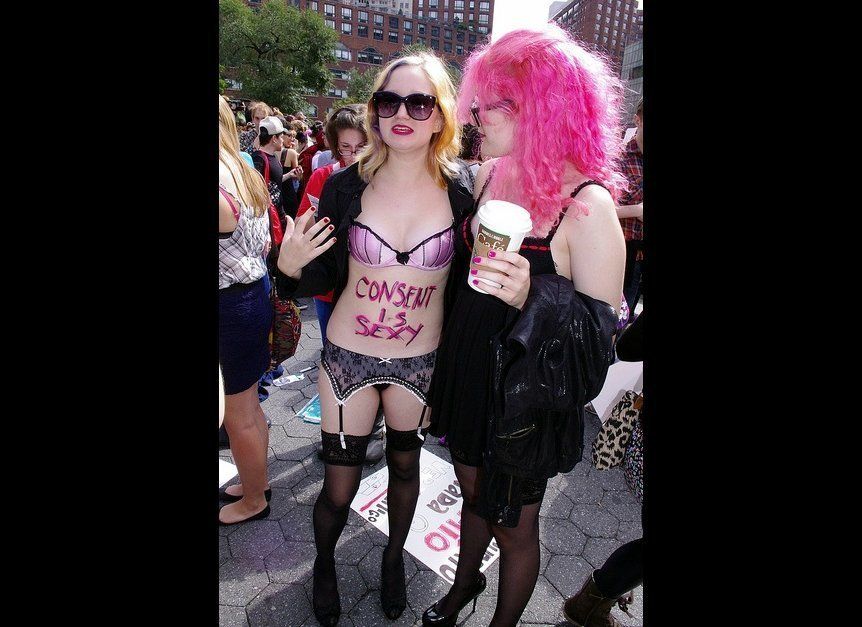