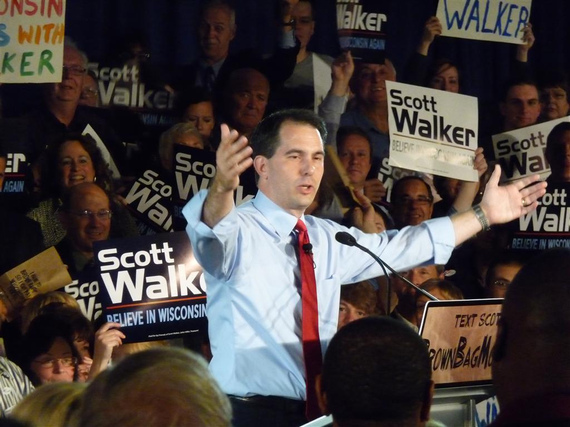 As the Wisconsin Governor launches his presidential campaign, he's touting a failed idea: mandatory drug testing for all recipients of food stamps, Medicaid, and unemployment insurance. According to Walker, forcing the disadvantaged to pee in cups is essential to small business growth. In his words:

As I traveled my state, I hear employers, small business owners say, overwhelming: 'We have jobs. We just need workers. And we need two things: people who know how to show up every day for work... and gimme someone who can pass a drug test.'

Yet employers in the Badger State beg to differ. Small business owners oppose his drug-testing scheme. They want the Governor to focus on serious economic issues, not on cynical political ploys to boost his popularity with the Tea Party.

Meet Lori Compas. Compas is the Executive Director of the Wisconsin Business Alliance, a nonpartisan organization for businesses in the Badger State. Compas told me that drug testing was "not something any small business has come to me about." Overall, she was "utterly perplexed by [Walker's] approach to jobs and economic growth," which prioritizes "things that don't have anything to do with economic development." Walker's push for drug testing and strict voter identification laws make good politics in a Republican presidential primary. But they are bad policies for hardworking Wisconsinites.

Joel Greeno agrees with Compas. A third-generation Wisconsinite, he owns Greeno Acres, a family farm that raises cattle and organic hay. In an interview for this article, Greeno revealed that that the Governor, whom he described as a "big failure," doesn't understand small businesses. Greeno looks for employees with a "good work ethic and [an] ability to do the job." He seeks employees who are competent, ethical and "upbeat and active," not those with certain drug test results.

And in the policy areas that employers care about, the Governor has failed. During Walker's reign, job growth has been meager. His harsh cuts to the University of Wisconsin system crippled higher education in the State. To quote Joel Greeno, Wisconsin "is in worse shape under his leadership."

Small business owners also recognize the fundamental unfairness of Walker's proposal. Just ask Barb Perkins. With her husband David, she owns the Vermont Valley Community Farm LLC, a community-supported agriculture business in southern Wisconsin. She told me she "strongly disagreed" with Walker's proposal and does not care what her employees "do at night as long as they arrive on time, well rested and ready to work." She also correctly observed, "poor people are not any different from middle income or rich people in drug use."

Perkins' point is critically important. There is no empirical evidence to support the claim that low-income individuals use drugs at rates higher than other groups. In fact, the data may even suggest that public assistance recipients use illegal drugs at lower rates than the general population. Consider Florida's experiment in drug testing of welfare recipients, which is a model for Walker's initiative. According to the New York Times, "only 108 out of 4,086 [Floridians] tested -- 2.6 percent -- were found to have been using narcotics." As found by the Substance Abuse and Mental Health Services Administration, the general populations' illegal narcotic usage rate was substantially higher, at 8.7 percent.

Government-mandated drug testing stigmatizes and dehumanizes the poor. It is expensive. It even exacerbates the problems of those struggling with drug addiction. But it is also a distraction from pressing economic problems that small businesses face. Scott Walker should stop pandering to the most extreme elements of the Republican base and start listening to employers across his state. It's time for the Governor to focus on the real issues that ail small businesses.