Even in a tight credit market, David Meinert didn't think he'd have a problem getting funding from his bank. He was a model entrepreneur, with good credit and a profitable business earning $2 million in revenue. But when he applied for a relatively small $50,000 line of credit from Chase in late 2010, he got denied in 12 hours, with no explanation. "It was insulting and made no sense, even to the banker. And there was no one to even talk to about it," Meinert says. "It's frustrating that banks are getting billions of dollars in taxpayers' money and they're sitting on that money and not lending it to small businesses. If you're making less than $10 million, they don't care about you."

Meinert decided to turn his frustration into action. After 12 years with Bank of America and a year with Chase, he's switching all his business accounts to Seattle Bank. Like many small-business owners, he initially joined the big banks for no particular reason other than that they were conveniently located. Bank of America was the closest bank to his office and Chase was the closest bank to his office that wasn't Bank of America. He spent years enduring all the subsequent irritations -- outdated online banking systems, the revolving door of bank employees, increasing fees, a sense that he was more a number than a name -- with little more than an eye roll. But the credit line denial was a breaking point.

The practical incentives were compounded by his philosophical objections. "Occupy Wall Street and Bank Transfer Day really put a highlight on national issues for me," Meinert says. "So it's not just a practical business decision, but also a societal, political decision. I don't want to do business with companies that are risking people's money in a way that can harm our whole country. And the damage that the big banks and so-called Wall Street have done to our economy and our country -- it's a real thing for me. I see it. The people it's damaging are my customers and my peers. Purely as a businessman, I see the destruction of the middle class and the inequality that's being caused in our society as bad for business. But also as a human, outside of being a businessman, I see the damage it does to humans. I realized I needed to be out of that system as much as I can be."

Tired of bad relationships with big banks, a growing number of small-business owners seem ready to make the switch to small local banks, community banks or credit unions. Lauri Kaye, owner of Create Cafe in Tucson, Ariz., thought it was ridiculous when she got charged a fee by Wells Fargo for depositing more than $2,500 into her business account. But she drew the line at fees affecting her employees. About three weeks ago, an employee told her that Wells Fargo was charging him $5 to cash his paycheck. When she contacted Wells Fargo, "They said there was nothing they could do about it," Kaye says. "It was non-negotiable. It's incredibly manipulative -- those who have no voice are getting pushed around."

Kaye switched to Wells Fargo from Northern Trust about a year ago, since Wells Fargo was around the corner from her cafe. Now she's thinking about switching back. Northern Trust "demonstrated in the past that they will negotiate. They know us by name and go out of their way to accommodate us and our employees," Kaye says. "When I made the jump to Wells Fargo, I didn't realize how bad banks could be."

Marcy Venezia, president of Boston-based Nightingale Group, which provides software for schools, opened a business account at Bank of America specifically because they had a lot of business services, including an investment branch. But she found it tough to get good customer service when the bank employees kept leaving. "The investment person left and then we had another investment person and they left, and when the third person left, we said 'this is enough turnover.' There was a fair amount of turnover in the office as well." Two years ago, Venezia switched her account to Bank of Canton, where she's able to have actual conversations with bank employees who know her. "At Bank of America, I was a grain of sand," Venezia says, "whereas with Bank of Canton, I'm more like a pebble."

Unlike the others, Ami Kassar, founder and CEO of Philadelphia-based MultiFunding, had absolutely no logistical problems with his bank. "Citibank is perfectly fine and terrific as a bank for the mechanics of running my business account," he says. Still, Kassar wrote a blog on MultiFunding's site entitled, "Why I am leaving Citibank and why you should too!" For Kassar, who advises small businesses nationwide about financing and securing loans, his objection is 100 percent moral. "I'd rather deposit my money into a bank that is more likely to take that money and lend it out to other small businesses that need it than to a large multinational bureaucracy that is far less likely to make loans to small businesses that help the economy," he explains.

"Businesses with under $2 million in revenue have a much easier time geting loans at smaller regional banks that are frankly much more organized to lend to small businesses," Kassar says. "It's a general statement, but the statistics prove it."

That led Kassar to wonder, "Why should I leave my deposit accounts at a bank that's not going help the small business down the street that's struggling?" Unable to come up with a satisfying answer to that question, he's currently transitioning to Valley Green Bank, a community bank in Philadelphia, that uses about 35 percent of its deposits to make small-business loans.

Meanwhile, Citibank announced in late September that it is committing $24 billion to small-business lending in the next three years. Many other large banks -- including Wells Fargo, Bank of America and Chase -- claim their small-business lending is up this year. "Large banks have more than $600 billion in outstanding loans to small businesses; the largest banks have pledged an additional $100 billion for 2011 and beyond," says Scott Talbott, senior vice president of government affairs for The Financial Services Roundtable, an association that represents the nation's largest banks, insurance companies, securities firms and other financial institutions. "Additionally, major financial services companies assist small-business owners outside of the lending arena by continuously extended a plethora of services, including insurance, retirement and financial planning, free education, networking and online portals."

But Kassar says the reason those pledges from on high often don't translate to small-business owners' real-life experiences is because of the banks' definition of small business. "The general rule is that when larger banks release their small-business lending statistics, [they are referring to] companies with revenues of $20 million or less," says Kassar. "And that, in my opinion, is not a small business." Kassar says data shows probably the vast majority of small-business loans made by big banks is to companies with revenues of $10 million to $20 million, shutting out the smaller companies.

"A lot of times, clients come to us and they've spent months in a big bank just being messed around," Kassar says. "Sometimes the process just exhausts people."

But Kassar doesn't think it's all big banks' fault. "Small-business lending is hard," he says. "It takes specialty and nuance, and we just don't find that the guy sitting at the corner branch of the big bank has the capacity to do it."

Since he transferred his business accounts to Seattle Bank, Meinert no longer has to deal with the powerless branch banker. He has noticed some immediate differences. "For one, I had a conversation with the executive vice president. That's a huge difference in itself," he says, laughing. "The higher-ups of the bank are able to come to my restaurant and have a meal. They are customers of my business, and I'm a customer of theirs. It's also just the whole vibe of knowing people and knowing they're decision-makers of the bank. I've been able to meet board members of the bank. They're local people who live here, work here -- they're going to be at this bank for a long time."

Just as his bankers can physically see how his business operates, Meinert knows how banks operate as well. It's not all about feel-good relationships, but what's best for both from a bottom-line perspective. "I understand Seattle Bank is profit-motivated just as Bank of America is, and obviously they are making a profit from me being there," he says. "But those profits are staying in Seattle and getting reinvested to help other Seattle small businesses succeed, which improves the economy and ultimately helps my business to succeed."

PHOTO GALLERY
Want To Switch Banks? Here's What You Need To Know

More Small Businesses Are Pulling Their Accounts Out Of Big Banks
Want To Switch Banks? Here's What You Need To Know 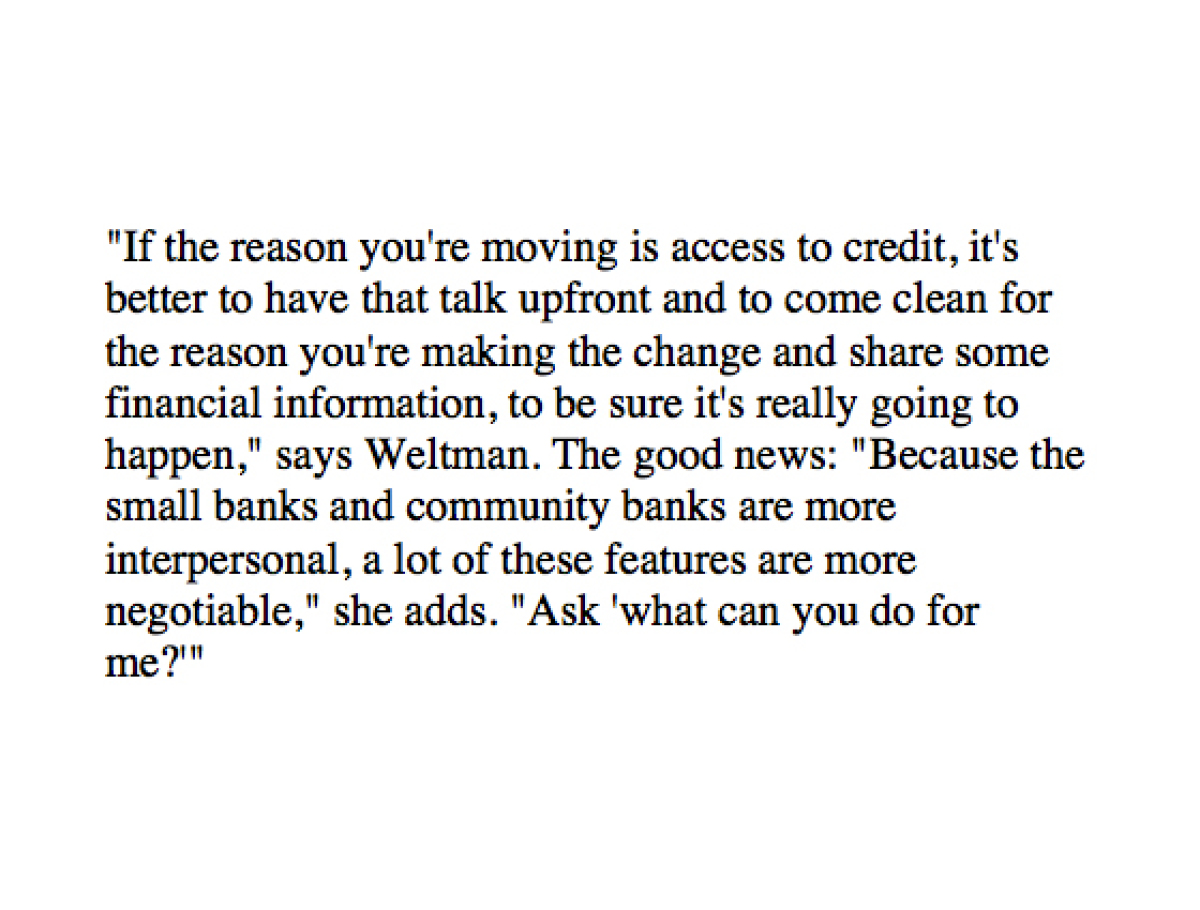