WASHINGTON -- Where there was once two there are now 11. They're still really tiny.

The Smithsonian's National Zoo is unveiling its 11 new Asian small-clawed otters this Saturday -- one of the largest groupings of this endangered animal in the U.S. These otters, which weigh in at less than 10 pounds, are the smallest and most social otter species in the world. Helpful, too -- the whole family pitches in for child-rearing.

The new otters include two parents and their nine youngsters, some born in August 2010, others in May 2011. There were 11 babies, but two died soon after arriving in D.C. -- zookeepers think dye used to identify the otters is likely what killed them.

The otters come from the Santa Barbara Zoo, which they'd outgrown. Santa Barbara traded its large family of otters for the National Zoo's two. As a thanks to Whole Foods, which funded the move, the market was given the chance to name the new residents. The parents are now named Chowder and Clementine. The babies' names are Pork Chop, Pickles, Saffron, Olive, Peaches, Turnip, Radish...and Kevin.

Clementine doesn't have to worry too much about her brood expanding more, at least for the near future. She's been fitted with deslorelin implant, a one-year birth control implant, which the animal keepers say makes it easier for mom and dad to live with their big family. Animal keeper Tallie Wiles told The Huffington Post that, in case procreation becomes necessary, breeding is still possible.

When can you visit the zoo's adorable new family of animals? This Saturday! From 10 a.m. until noon, the zoo will be celebrating its playful new brood with a public unveiling, featuring the animals themselves and "ottergraph" illustrations featuring the names of the eleven new otters.

Get a sneak peek of the new otters in the slideshow below -- the oysters and crabs the otters are eating in the pics were provided by Whole Foods: 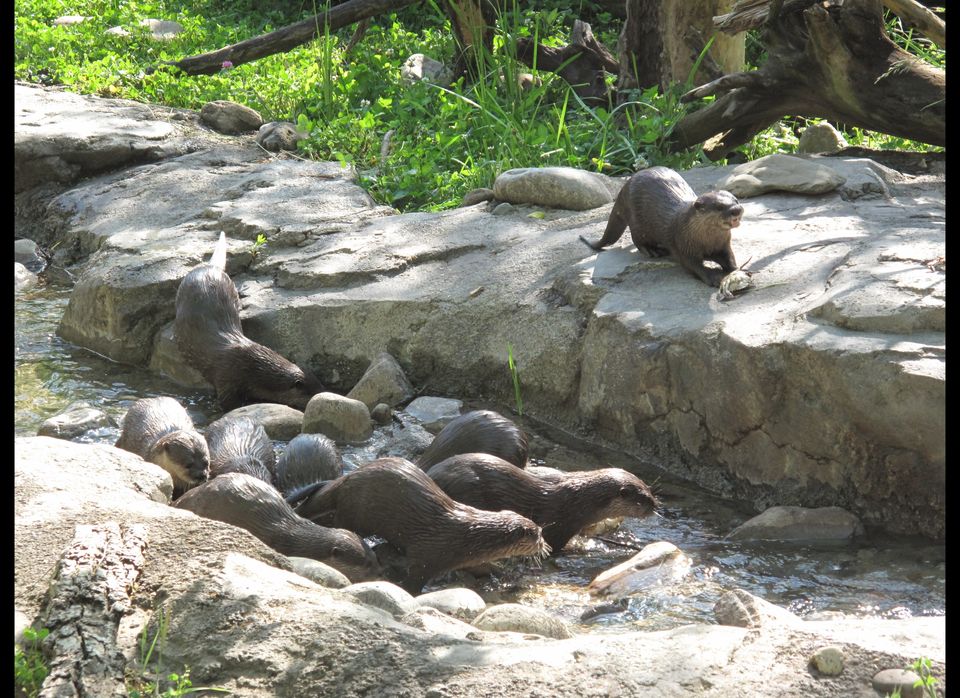