GRATON, Calif.:(By Terence Chea, AP) As Americans downsize in the aftermath of a colossal real estate bust, at least one tiny corner of the housing market appears to be thriving. To save money or simplify their lives, a small but growing number of Americans are buying or building homes that could fit inside many people's living rooms, according to entrepreneurs in the small house industry.

(SCROLL DOWN FOR PHOTOS OF THE LATEST BATCH OF SMALL HOMES)

Some put these wheeled homes in their backyards to use as offices, studios or extra bedrooms. Others use them as mobile vacation homes they can park in the woods. But the most intrepid of the tiny house owners live in them full-time, paring down their possessions and often living off the grid.

"It's very un-American in the sense that living small means consuming less," said Jay Shafer, 46, co-founder of the Small House Society, sitting on the porch of his wooden cabin in California wine country. "Living in a small house like this really entails knowing what you need to be happy and getting rid of everything else."

Shafer, author of "The Small House Book," built the 89-square-foot house himself a decade ago and lived in it full-time until his son was born last year. Inside a space the size of an ice cream truck, he has a kitchen with gas stove and sink, bathroom with shower, two-seater porch, bedroom loft and a "great room" where he can work and entertain – as long as he doesn't invite more than a couple guests.

He and his family now live in relatively sprawling 500-square foot home next to the tiny one.

Shafer, co-owner of the Tumbleweed Tiny House Company, designs and builds miniature homes with a minimalist style that prizes quality over quantity and makes sure no cubic inch goes to waste. Most can be hooked up to public utilities. The houses, which pack a range of amenities in spaces smaller than some people's closets, are sold for $40,000 to $50,000 ready-made, but cost half as much if you build it yourself.

Tumbleweed's business has grown significantly since the housing crisis began, Shafer said. He now sells about 50 blueprints, which cost $400 to $1,000 each, a year, up from 10 five years ago. The eight workshops he teaches around the country each year attract 40 participants on average, he said.

"People's reasons for living small vary a lot, but there seems to be a common thread of sustainability," Shafer said. "A lot of people don't want to use many more resources or put out more emissions than they have to."

Compared to trailers, these little houses are built with higher-quality materials, better insulation and eye-catching design. But they still have wheels that make them portable – and allow owners to get around housing regulations for stationary homes.

Since the housing crisis and recession began, interest in tiny homes has grown dramatically among young people and retiring Baby Boomers, said Kent Griswold, who runs the Tiny House Blog, which attracts 5,000 to 7,000 visitors a day.

"In the last couple years, the idea's really taken off," Griswold said. "There's been a huge interest in people downsizing and there are a lot of young people who don't want to be tied down with a huge mortgage and want to build their own space."

Gregory Johnson, who co-founded the Small House Society with Shafer, said the online community now has about 1,800 subscribers, up from about 300 five years ago. Most of them live in their small houses full-time and swap tips on living simple and small.

Johnson, 46, who works as a computer consultant at the University of Iowa, said dozens of companies specializing small houses have popped up around the country over the past few years.

Before he got married, Johnson lived for six years in a small cabin he built himself and he wrote a book called "Put Your Life on a Diet: Lessons Learned from Living in 140 Square Feet."

"You start to peel away the things that are unnecessary," said Johnson, who now lives in a studio apartment with his wife. "It helps you define your priorities with regard to your material things."

Northern California's Sonoma County has become a mini-mecca for the tiny house industry, with an assortment of new businesses launching over the last few years.

Stephen Marshall, 63, worked as a building contractor for three decades before the real estate market tanked three years ago. That's when he jumped into the tiny house business, starting Petaluma-based Little House On The Trailer.

His company builds and sells small houses that can serve as stand-alone homes equipped with bathrooms and kitchens, and others he calls "A Room of One's Own" that can be used as a home office or extra bedroom. Many of his customers are looking for extra space to accommodate an aging parent or adult children who are returning home, he said.

He said his small houses, which sell for $20,000 to $50,000, are much cheaper than building a home addition and can be resold when the extra space is no longer needed. His company has sold 16 houses this year and aims to sell 20 next year.

"The business is growing as the public becomes aware of this possibility," Marshall said. "A lot of families are moving in with one another. A lot of young people can't afford to move out. There's just a lot of economic pressure to find an alternative way to provide for people's housing needs." 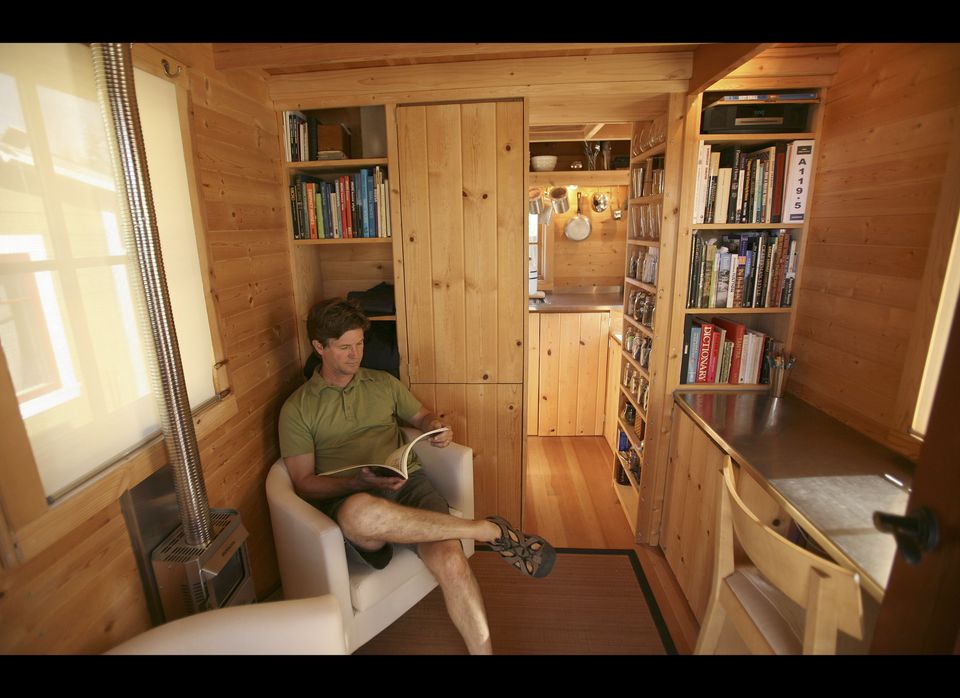 1 / 10
In this photo taken Oct. 14, 2010, Jay Schafer, owner of Tumbleweed Tiny Houses is seen inside one of the homes he built for himself in Graton, Calif. Schafer helps people live small. The California homebuilder has become a leader in a small but growing corner of the American housing market: the tiny house. Schaefer, who lived in a 89-square foot house with his wife before his son was born last year, builds houses that are smaller than most people's living rooms. (AP Photo/Ben Margot)