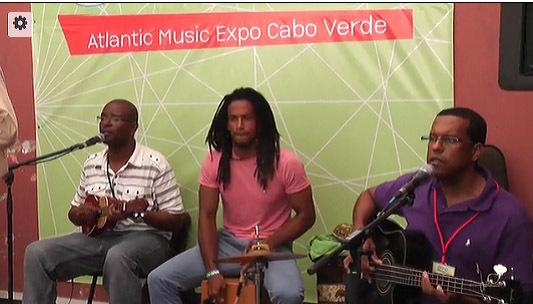 For 20 years, the World Music Expo (WOMEX) has been the premiere European destination for targeted world music marketing. But realizing that the concept needs to go truly global WOMEX has been teaming up with other organizations world wide, and collaborating on similar events. The Atlantic Music Expo (AME) in Cabo Verde is now up and running and planning its third year. I have been curious about how a WOMEX-style event might feel outside of Europe and in an island setting, and even more curious about Cabo Verde. When Marcy DePina of Forsa Media Group invited me, I didn't think twice.

Cabo Verde (you may know it as Cape Verde) is an excellent location for the event, as its music is acknowledged as a primary export. Its Minister of Culture, Mario Lucio Sousa is also a musician, and recognizes the importance of developing the economic side of the arts of his homeland. I'm sure he was a major driver in putting the impressive event together.

Small Islands, Big Music: Report from the AME at Cabo Verde from Michal Shapiro on Vimeo.

The uninhabited island cluster of Cabo Verde was first discovered by the Portuguese in the 16th century and used as a base for the slave trade. As a result the people of this windswept archipelago are now a combination of races that reflect many cultures and take pride in that mix. In the song form called morna, one feels the dark imprint of Portuguese saudade, while the percussion driven dance batuque comes from a sensuous African root. Add in the rhythms of ocean waves for an island lilt, and you can imagine the attractions of the music.

Although the AME 2014 promoted Cabo Verdean artists and labels, it was also a showcase for artists from other areas. This year Guinea Bissau (linked politically and historically) and even Reunion Island were represented, along with a sprinkling of acts from Europe and Brazil.

It was difficult to capture even a fraction of music that was presented, but I have tried to give a decent sampling, and a feel for what it was like to be there. I also hope that my video captured some of the beauty of the place and the people. And I have to mention that along with its music, Cabo Verdean coffee is excellent, grown right in the volcanic soil on the island of Fogo, (my partner demolished the package I brought back within days; I should have brought back more!) as are the grapes that go into its wine, Chã, which is export quality, complex --and potent! The cuisine is also lovely (the seafood is awesome) always fresh, and I did not come across anything pre-prepared. This sometimes makes for a bit of a wait at restaurants - but what's the hurry?

TIP: I would recommend visiting Cabo Verde during the AME as the weather is perfect then, all the night time showcases are free to the public, and the Kriol Jazz Festival follows right after the AME, and that is a wonderfully programmed event as well.

For more information about the AME visit: http://www.atlanticmusicexpo.com/
For more performances by some of the artists in this video, visit: http://inter-muse.com